The sharp eyes of Anomalocaris, a top predator that lived half a billion years ago 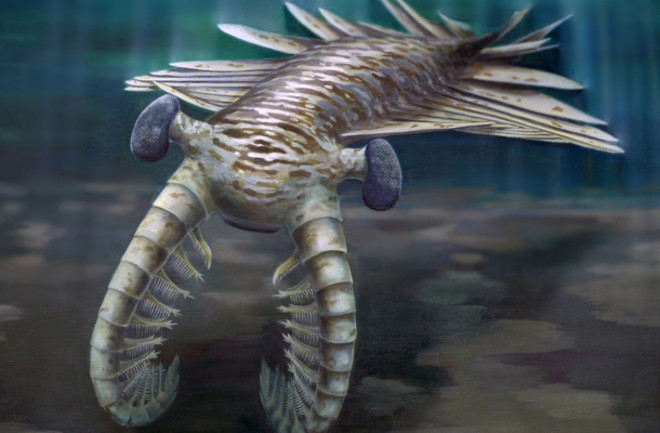 Before killer whales and polar bears, before sharks and tyrannosaurs, the world’s top predator was probably a bizarre animal called Anomalocaris. It lived in the Cambrian period, over half a billion years ago, when life was confined to the seas and animals took on bizarre shapes that haven’t been seen since.

Many scientists believe that Anomalocaris ruled this primordial world as a top predator. At up to a metre in length, it was the largest hunter of its time. It chased after prey with undulating flaps on its sides and a large fan-shaped tail. It grabbed at them with large spiked arms. It bit into them with a square, tooth-lined mouth. And it tracked them with large stalked eyes. (See the Prezi below for a tour of Anomalocaris’ anatomy, or load a single image with all the info.)

Now, John Paterson from the University of New England, Armidale, has uncovered new fossilised eyes that he thinks belonged to Anomalocaris. If he is right, this hunter had extraordinarily acute vision for its day, rivalling that of almost all modern insects.

We know that Anomalocaris had two large eyes that stuck out from its head on stalks. But while the animal’s arms, body and mouth have fossilised well, time has not been kind to its eyes. Until now, they were only known from their outlines.

Paterson has changed that by finding a pair of well preserved eyes at the Emu Bay Shale, a rock formation in South Australia. “This deposit is renowned for preserving soft-bodied organisms, including soft tissues such as digestive glands and muscle,” says Paterson. Even so, the eyes are incredibly rare. Paterson only found two among some 5,000 specimens.

They’re both two centimetres long and pear-shaped, making them larger and longer than any other animal eyes from the same area. The only creature big enough to have owned them is Anomalocaris, and scientists have previously found at least two species of the large predator at Emu Bay.

The surfaces of the eyes are covered in tiny lenses, packed in a hexagonal grid. That’s the classic structure of the compound eyes found in today’s arthropods – the massive group that includes all insects, crabs, spiders and more. Paterson reckons that each eye has at least 16,700 individual lenses on the best-preserved side. If the entire eye was covered in these lenses, the actual count was probably much higher.

If that’s the case, Anomalocaris has some of the largest and most sophisticated compound eyes ever known. By measuring the angles of the individual lenses, Paterson estimates that the animal had very sharp sight too. “Only a few arthropods have similar or better resolution, such as modern predatory dragonflies that can possess up to 28,000 lenses in each eye,” says Paterson (as in the blue-spotted hawker below).

The eyes cement Anomalocaris’ position as a top predator of its day. “Anomalocaris would have seen its world with exceptional clarity whilst hunting in well-lit waters,” says Paterson. “It would have had close to 360 degree vision.” Its sharp sight might even have escalated an evolutionary arms race with its prey, triggering a range of defensive adaptations.

Paterson also argues that the eyes confirm that Anomalocaris was an early arthropod, for this is the only group with compound eyes. If that is true, compound eyes evolved very early in the history of this group, and certainly before they developed their distinctively hard external skeletons.

But Jan Bergstrom from the Swedish Museum of Natural History is not convinced that the eyes belong to Anomalocaris at all. “The authors have difficulties in finding hard evidence for their conclusion,” he says. He notes that Anomalocaris’ eyes are far apart, whereas the Emu Shale ones are almost touching (although Paterson counters that the animal’s head may have been compressed over time).

But Bergstrom also says, “On the other hand, large eyes with acute sight would fit a hunter… and anomalocaridids would have needed large eyes.” He adds, “It is, of course, interesting that so sophisticated eyes had developed so early on, whomever they belonged to.”

Anomalocaris is no stranger to controversial body parts. It was discovered in a piecemeal fashion, and its various features were thought to be entirely different animals. Joseph Whiteaves found the grasping arms in 1892, and thought them to be the tails of shrimp-like animals (hence the creature’s name Anomalocaris, or strange shrimp). Charles Walcott found the ring-shaped mouth separately, and identified it as a jellyfish called Peytoia. Simon Conway Morris found the body and mistook it for a sponge that he named Laggania.

The pieces were, in fact, all part of the same animal, as Harry Whittington and Derek Briggs finally showed. In 1981, they re-examined an earlier fossil to show that the ‘shrimp’ and the ‘jellyfish’ were actually connected. They finally revealed the animal’s true shape in all its weirdness.

Even now, its anatomy is being disputed. Some see the spiked mouth and grasping arms as signs of a powerful hunter (see graphic). On top of that, Anomalocaris is thought to have inflicted the bite marks found on some trilobites (a group of omnipresent hard-shelled Cambrian critters). Trilobite fragments have also been found in fossilised faeces that are too large to have been made by any other animal.

But Whitey Hagadorn from Amherst College has argued that Anomalocaris’s mouth and teeth were too soft to crunch through thick trilobite armour, and the plates and tips have never shown any sign of wear and tear. In Hagadorn’s view, Anomalocaris targeted soft-bodied prey rather than being a fearsome trilobite-hunter.

Considering the animal’s history, we shouldn’t be surprised if debates like these continue to be part of Anomalocaris’s legacy, even 515 million years after the last one died.