The Secret Origins of the Search for Extraterrestrial Intelligence

How the Order of the Dolphin helped establish the scientific search for aliens. 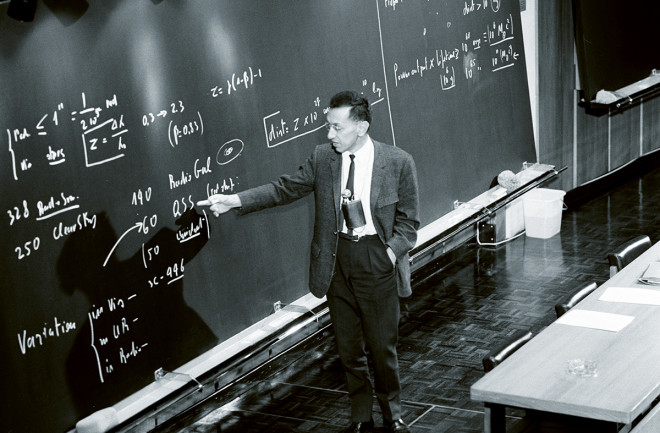 Aliens are serious science. The search for extraterrestrial intelligence, or SETI, constitutes major research projects at radio telescopes the world over, and it is championed by the non-profit institute that shares its name. Multiple experiments on the subject, and citizen science projects like SETI@home, have been going strong for decades. Every year, papers, conferences and initiatives discuss how best to seek out — and maybe even talk to — E.T.

But it wasn’t always that way.

While UFO sightings and depictions in movies and comics spiked during the 1950s, the topic of aliens was considered unprofessional among scientists. Only a handful of professionals would speculate on the possibility of alien life, and even they made sure it was only a small part of their research. So when a group of science luminaries from a variety of disciplines met at a rural observatory in West Virginia to talk about little green men, they did so in secret.

They called themselves the Order of the Dolphin, and almost single-handedly launched modern SETI research.

In 1958, a newly minted Harvard University Ph.D. named Frank Drake came to the National Radio Astronomy Observatory in Green Bank, West Virginia, home to the biggest, baddest telescope in the burgeoning practice of radio astronomy. He usually sought typical radio astronomy targets: the radiation belts around Jupiter, for example, or the surface temperature of Venus. But one day in 1960, Drake and his colleagues instead tuned in to two nearby stars, Tau Ceti and Epsilon Eridani. Their goal was simple: They were alien hunting, hoping to hear radio signals originating from intelligent extraterrestrials. Drake had long been interested in the topic, and he was reassured of its scientific merit by the work of physicists Giuseppe Cocconi and Philip Morrison. The previous year, the pair co-authored a Nature paper with the provocative title “Searching for Interstellar Communications.”

Much to Drake’s surprise, his team actually heard something in those first experiments. Unfortunately, it was just a high-altitude plane. Project Ozma, as the research was called (after L. Frank Baum’s fictional monarch of Oz), was both the first SETI experiment and the first SETI false alarm.

As Drake would later write in his book Is Anyone Out There?, co-authored with science writer Dava Sobel, “We had failed to detect a genuine alien signal, it was true, but we had succeeded in demonstrating that searching was a feasible, and even reasonable, thing to do.”

As Drake conducted his first furtive SETI searches, John Lilly — a physician, philosopher, writer and inventor — was attempting to communicate with a different alien intelligence. He just wasn’t looking quite as far away.

Humans are, in fact, surrounded by intelligence. Our fellow great apes understand the rudiments of language, and creatures great and small — from elephants to crows — seem to possess highly organized social structures, tool-making skills and self-awareness. Intelligent life isn’t limited to land: The octopus brain is one of the most remarkable on Earth, and its cousin the cuttlefish is no slouch, either. But the superstars of the sea are marine mammals, especially dolphins and whales.

Lilly wanted to understand and communicate with dolphins — literally, to speak their language. And his ideas were taken seriously. He founded the Communication Research Institute in the late 1950s, and he published work suggesting that his attempts to talk to dolphins were working.

Lilly wanted to understand and communicate with dolphins — literally, to speak their language. And his ideas were taken seriously. He founded the Communication Research Institute in the late 1950s, and he published work suggesting that his attempts to talk to dolphins were working. (Credit: The Estate of John C. Lilly)

He also saw the experiments as a way to help efforts to contact aliens. If we can crack the code of dolphin language, Lilly thought, we might just have a shot at decoding other alien communications, too. If only he had a way to communicate that potential to other researchers ...

While Drake and Lilly were pioneering new fields, it fell to a government scientist to turn such individual efforts into a broader, scientifically diverse program. In 1961, ballistics and rocketry expert J. Peter Pearman — a staffer for the National Academy of Sciences’ Space Science Board — arranged a meeting to expand the search for alien intelligence. While it wasn’t officially a secret meeting, it definitely wasn’t well publicized. The topic was still on the fringes of established research, and no one would put their career on the line to search for little green men. The fabled meeting of the Order of the Dolphin wound up taking place in autumn 1961 at Green Bank. Counting Pearman, 10 scientists were gathered. Drake and Lilly were there, as well as Drake’s inspiration, Morrison. Also in attendance were radio astronomer Dana Atchley, preeminent biochemist Melvin Calvin, astrophysicist Su-Shu Huang (who first conceived of “habitable zones,” areas around stars where liquid water could form on planets), computing pioneer Barney Oliver and Russian astronomer Otto Struve.

The final attendee was a young Carl Sagan, now perhaps the best known of the bunch. (One more unofficial attendee: A supply of champagne to celebrate the likely announcement of a Nobel Prize for Calvin’s work on plant photosynthesis.)

The group met for three days starting on Halloween and hashed out the outlines of a research program. While much of the structure and approach of today’s SETI protocols began here, the biggest concrete outcome was the Drake equation.

To know if aliens are out there, it helps to have an idea of how abundant they might be. The Drake equation estimates the odds of various factors necessary for intelligent life to exist, including the rate of star formation, the fraction of stars that have planets and the fraction of habitable planets actually being inhabited. Written out, it reads:

Despite its output of hard numbers, the Drake equation is more symbolic than descriptive — depending on how you figure the estimates, we could be one of thousands of civilizations, or utterly alone. Instead, the equation is a tool to guide how scientists should think about looking for alien life, offering a way to combine various existing scientific disciplines.

As it happened, Calvin did win the Nobel during the group’s meeting, and the attendees busted out the bubbly. But Lilly became another star of the show, playing recordings of dolphins that he said showed signs of language and empathy.

“In fact, if we slowed down the playback speed of the tape recorder enough, the squeaks and clicks sounded like human language,” Drake wrote in his book. “We felt some of the excitement in store for us when we encounter nonhuman intelligence of extraterrestrial origin.”

They were all enthralled. Lilly’s research generated so much excitement that by the end of the conference, the attendees dubbed themselves the Order of the Dolphin. Calvin, in his post-Nobel joy, even went on to send commemorative pins with silver dolphins to all the attendees. As Morrison told David Swift, author of the book SETI Pioneers: “It wasn’t that we ever had meetings or chose officers of the Order of the Dolphin. It was just a souvenir of the particular time together.”

Unfortunately, it seems their excitement may have been a little hasty. “In retrospect,” Drake wrote, “I now think that Lilly’s work was poor science. He had probably distilled endless hours of recordings to select those little bits that sounded humanlike.”

Shortly after the Order of the Dolphin meeting, Lilly began using ketamine and LSD (legal at the time) as part of his research on brain function. While Sagan visited the subsequent experiments, reporting back to Drake on Lilly’s progress, the science became hazier, and Sagan’s interest soon drifted as well. Lilly’s later work is now considered little more than pseudo-science, and it has tainted attempts to understand the intelligence of dolphins ever since.

Despite Lilly’s departure from legitimate science, the Order of the Dolphin’s legacy endures. The Drake equation remains a useful way to frame SETI research, and the scientific advances we’ve made in quantifying its pieces are significant. We’ve found thousands of planets in other star systems and understand them better than ever — within the next few years, we’ll probably know not just if a world is in its star’s habitable zone, but whether it’s truly habitable. Maybe soon we’ll be able to determine if alien life actually exists on any of those worlds, narrowing down one more variable of the Drake equation.

More resources than ever are pouring into SETI efforts, including a $100 million project from Russian billionaire Yuri Milner called Breakthrough Listen. Even if that effort fails to detect intelligent alien communication, increased exploration efforts by NASA and other agencies may find evidence of life closer to home, either in Mars’ past, or today on the moons Enceladus, Europa or Titan.

In other words, scientific literature on aliens may become a reality in the next few decades. While the man who inspired the Order of the Dolphin’s name may have been pushed into the fringes, the work of the order itself continues, vital as ever.

John Wenz is a freelance writer based in Lincoln, Nebraska. This article originally appeared in print as "SETI's Secret Origin Story."