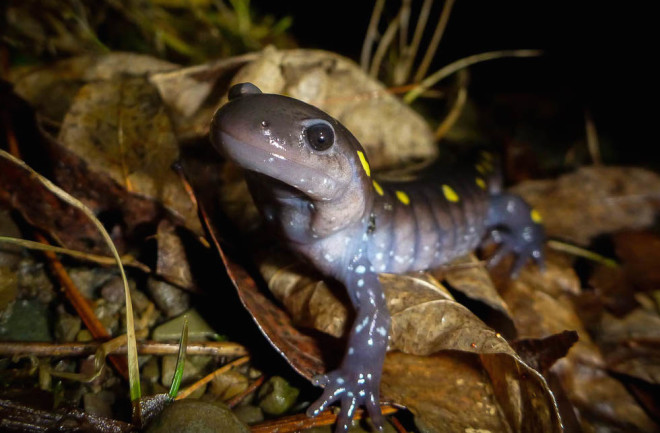 Citizen scientists of the Salamander Crossing Brigades in New Hampshire help thousands of salamanders safely across dangerous roads in their migratory journey to the vernal pools. Find out how they contribute to conservation research by tracking and monitoring the salamanders on an annual basis.

Guest post by Brett Amy Thelen Every spring, as the earth thaws and warm rains drench New England, thousands of amphibians make their way to vernal pools to breed. It’s a magical time. For the salamanders and frogs undertaking their annual migration, it’s also a dangerous one. One study in western and central Massachusetts found that roadkill rates on even relatively quiet roads could lead to extirpation of local spotted salamander populations in as few as 25 years. Another study reported that 50-100% of salamanders attempting to cross a paved rural road in upstate New York didn’t survive the trek.  Cue the Salamander Crossing Brigades, in which volunteers move migrating amphibians across roads by hand, keeping count as they go. Over the years, the Harris Center for Conservation Education – a land trust and conservation education organization in the Monadnock Region of southwestern New Hampshire – has coordinated a broad spectrum of community-based conservation research and monitoring projects, but the Crossing Brigades are by far the most popular. How It Works AVEO, the citizen science arm of the Harris Center for Conservation Education in Hancock, New Hampshire, coordinates Crossing Brigades at ten known sites with high concentrations of road-crossing, spring-migrating amphibians in southwestern New Hampshire. Each site has one or two volunteer Site Coordinators, who are responsible for compiling data, managing field equipment, and assisting other Crossing Brigade volunteers in the field. All volunteers are asked to attend a two-hour training, where they learn species identification, road safety, and basic data collection methods. As the time nears, we watch the weather closely; when conditions seem right for a migration, we notify volunteers via email, social media, and a five-day “salamander forecast” on our website. On the Big Night(s), Salamander Brigadiers arrive at their sites around sunset and stay until they are ready to go home or until car or amphibian traffic slows, typically before midnight. As they move amphibians across the road – by hand or in clean buckets – they keep count of how many individuals they find, by species; dead amphibians are counted separately and removed from the road to prevent duplicate counts. In addition to their activity at known crossing sites, our Salamander Brigade volunteers also help find new-to-us amphibian road crossings, which we add to an online map of amphibian crossing sites in the Monadnock Region. Our goal is to identify crossings in every town, so that no one needs to drive far, or even at all, to participate. We also strive to empower people to become stewards of their local crossings, whether or not the crossings are staffed by Site Coordinators or demarcated by Salamander Crossing signs. Because of the highly-localized and weather-dependent nature of amphibian migrations, local coordination is essential; we know of amphibian crossing efforts of various scales (from single road crossings to regional initiatives) in at least eight Northeastern and mid-Atlantic states, including Vermont, Massachusetts, Connecticut, New Jersey, New York, Pennsylvania, and Virginia.

AVEO Salamander Crossing Guards helping a Jefferson salamander cross the road at night (Image Crdit: Sigrid Scholz/AVEO/Flickr/CC BY-NC-ND 2.0) The Salamander Crossing Brigades make a great entry point for new citizen scientists – data collection is simple, the time commitment is minimal, and participation is rewarded with a high likelihood of personal interaction with charismatic amphibians. As a result, in any given year, 75 to 150 people will actively participate in our Salamander Brigades, and another hundred or so will follow along from home. A fraction will then move on to volunteer with more rigorous citizen science efforts, such as our vernal pool inventory project.

The Science in Citizen Science

At its heart, this project is more stewardship than science, but the numbers add up. Since the program’s inception in 2007, over 600 volunteers have helped nearly 25,000 amphibians survive the most dangerous journeys of their lives. In addition, the City of Keene purchased land – previously slated for development – to protect a migratory amphibian corridor that was documented by our volunteers. As our efforts grow, we hope the data our citizen scientists collect will be used for land conservation or road improvements that protect amphibians in other places, too. In 2014, we embarked on a new initiative to create a photographic database of salamander spot patterns at amphibian road crossings associated with our Brigades. Spotted salamanders live a remarkably long time (upwards of 20 years!) and their spots are a bit like fingerprints on humans: each salamander has its own unique constellation of markings, which can be used to tell that individual apart from all others. Cell phones make it easy for volunteers to catalog these patterns. We started off small – with just one site – and were amazed to discover that 20% of the spotted salamanders who were moved across that road by volunteers in 2015 had also been moved across that road by volunteers in 2014. The exact same salamanders, both years! Our citizen scientists contributed spot pattern photographs for seven more crossing sites in 2015, and we look forward to seeing which critters return next spring. Over time, we believe these spot pattern records could provide meaningful information on year-to-year survival of salamanders that must cross roads to reach their breeding pools. In the words of one Crossing Brigadier, it’s also way cool.

Brett Amy Thelen is Science Director of the Harris Center for Conservation Education. You can reach her at thelen[at]harriscenter[dot]org