New evidence from the Cassini Saturn probe indicates that the planet's moon Rhea may itself have rings! 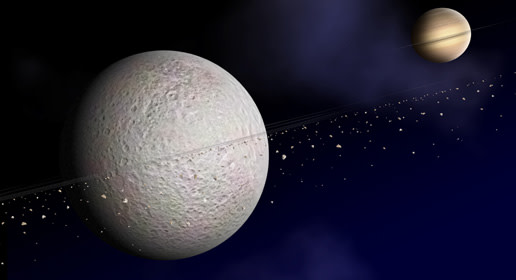 First off, no pictures of the ring, sorry (that's an artist's conception above). If it exists, it's very tenuous. Basically, Cassini is outfitted with a suite of instruments. One of them is the Magnetospheric Imaging Instrument, which can detect charged particles around it. When Cassini passed by Rhea, the MII detected a sharp drop in electrons, as if it were being shielded by something. From an analysis of the data, it looks like rings fit the bill. The important aspect of this is that the number of electrons dropped on both sides as it passed the moon. That really says "rings" to the scientists. I'll note that this is not confirmed yet, but the folks at Cassini seem pretty confident. It's not impossible for a moon to have rings; an old impact could have ejected dust and gas into orbit around Rhea. The moon is 1500 km (950) miles across, so it's fair-sized; smaller than our Moon but the second biggest of Saturn's. It has enough gravity to hold on to a ring for a while. The scientists have a podcast they put together to explain all this, which is thoughtful of them. The press release has more info, too. The solar system is a surprising place. That's one of the reasons I like it here.