The Revealingly Flawed AI of "Chappie" 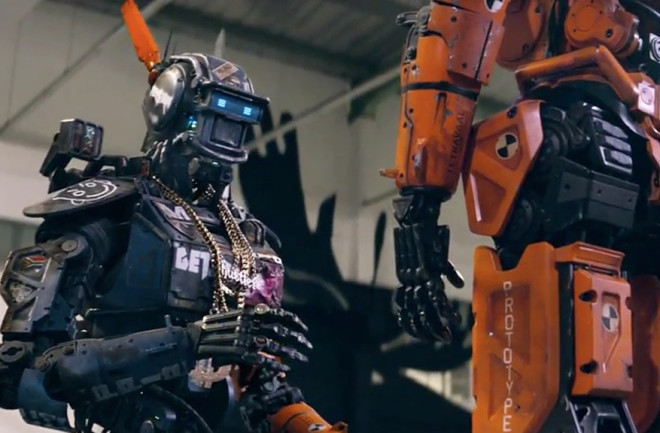 Chappie (left) meets his non-AI counterpart and contemplates--just a little--what it is that distinguishes conscious matter from unconscious matter. (Credit: Sony Pictures) What is consciousness? That question has been fertile ground for millennia of philosophical debates, centuries of scientific research, and decades of juicy movie plots, going back at least to Fritz Lang’s Metropolis. This week it gets a workout yet again in Chappie, a new movie directed by Neill Blomkamp (District 9) and starring sci-fi stalwarts Sigourney Weaver and Hugh Jackman along with—less predictably—Dev Patel, best known as the star of Slumdog Millionaire. Broadly speaking, there are three classes of machine intelligence fiction. Class One assumes that human consciousness is unique and can exist in a machine only if that machine is part human (RoboCop is a prime example). Class Two assumes that machines can mimic many aspects of human consciousness but lack the essential soul (the Terminator movies are a modern archetype). Class Three treats consciousness as a solvable programming problem: Put in the right code, or give the wrong code some kind of mysterious scramble, and a conscious machine emerges. Familiar examples of Class Three movies include Her, AI: Artificial Intelligence and, er, Short Circuit. Chappie falls squarely into Class Three, with all of the dramatic potentials and conceptual pitfalls it entails. I spoke with Blomkamp and his cast about why they went down this path. Their commentary explains a lot about the movie's take on artificial intelligence and its confusing scientific politics. Chappie turns out to be a great case study in the challenges of squeezing an expansive concept into the tight confines of mainstream Hollywood entertainment. If you’ve seen the trailer you get the basic concept. Chappie is set in a near-future South Africa, where the government has decided to address rampant crime by introducing a squadron of robotic police officers. So far so good: This is a classic forward-spin on existing ideas and technologies. Simple battlefield robots already exist and have been tested in limited deployment, and the company that builds Chappie is patterned knowingly on South African arms company DENEL. I also note that the Chappie design looks similar to the humanoid robots that participated in an ongoing DARPA robotics challenge. But in true Short Circuit style, a rogue element emerges: One of the military robots becomes self-aware, and takes off on a totally new mission to understand his identity. In this case, the change occurs not via a lightning strike, but through the deliberate actions of Deon Wilson, a genius computer programmer (Patel). And here's where Chappie goes intriguingly awry, as it dips into some common sci-fi tropes.

Chappie and Deon, his creator--a prime, improbable example of the lone genius at work. (Credit: Sony Pictures) The lone genius. It's a familiar theme: A single man (and yes, it's almost always a man), through sheer brilliance, solves one of the greatest science or technology puzzles in history--and does it with no help and, seemingly, without even consulting anyone else. In the case of Chappie, Deon not only develops a conscious computer program, he seemingly solves the problem in a single night of furious work. This kind of plot device serves an obvious cinematic function by creating a simple, solitary hero, but it doesn't bear much resemblance to the real practice of research and engineering. I was curious what Blomkamp had in mind. Was this pure storytelling economy, or is Chappie intended as commentary on the nature of the creative process? Blomkamp: "I think it’s both. Dev’s character comes from a place that I find very familiar. Dev was asking me questions about him, like 'Why does he want to create AI?' Does he want friends? Is he lonely? Does he want to play God? But I were able to, I would to create AI, and I don’t need a reason why. I just want to. I want to see what it would do. The same thing with ‘why are you making a film?’ I don't know, I just want to see it. I don’t need a real motivation about why I need to do it. When Dev goes and asks his boss for the robot [to run a consciousness experiment], that’s like asking for film money." It's a telling answer, one that provides a deeper explanation of the prevalence of the lone-genius trope. It's not just that single characters are easier to write or to show on the screen. For narrative purposes, they also become proxies for the artist's own feeling of solitude. The catch is that creating a conscious machine is an entirely different type of creative problem than writing a screenplay, and therein lies a lot of pop-culture confusion. Just look at the actual, state-of-the-art Chappie-like research going on at UCLA's Robotics & Mechanisms Laboratory:

Dennis Hong of UCLA shows off Darwin, his real bipedal robot in the style of Chappie. See a video of Darwin in action here, or watch the capabilities (and engineering limitations) of Darwin's big brother, THOR, in a separate video here. (Credit: UCLA/RoMeLa) The computable mind. Can a machine be truly think like a person? Can the human mind be reduced to a batch of computer code? These are completely open and controversial questions. What we do know in somewhat concrete terms is that the human brain is enormously complex and information rich. It contains about 100 billion neurons making about 100 trillion connections in all. By one estimate, the total information content of the brain (both its structure and its embodied ideas) add up to 10^42 bits. Suffice it to say, you are not going to be uploading your brain onto a portable flash drive, or transferring it into the kind of processor you'd use in a robot that is designed mainly to do predicable tasks like identifying and shooting moving targets. [Spoiler alert?] But that is exactly what happens in Chappie. I suspected that Blomkamp knew his highly reductionist, computational view of the mind was not realistic. He confirmed as much. Blomkamp: "I absolutely come from a place of data-driven, western, very technology based, mathematically based point of view on the whole thing, but the older I get, the more I’m not sure that’s actually the case. There’s definitely something that’s tripping me up. I’m not sure that it’s going to be like we just create artificial intelligence. I think there may be something more at play with consciousness isn’t just as answerable as a bunch of equations can state." Part of the problem here, I think, is that people will readily classify things that merely look alive as things that are genuinely conscious. The human mind is very good at such acts of projection. Kids will happily play along with the idea that a sock with two buttons for eyes is alive, but I assure you, that is not an effective way to build an AI.

A map of human brain connections hints at the vast challenge of creating a synthetic consciousness. (Credit: Human Connectome Project)

The AI as cuddly ET

. Just as the movie ET isn't really about the nature of alien life, movies about artificial intelligence often are really kid-oriented buddy/adventure movies in disguise. On this level, Chappie works better. There's an entertaining rhythm to the action once things get going, there are clearly drawn heroes and villains, and during the lulls from violence there are some surprising (if somewhat jarring) moments of humor and tenderness. Blomkamp: "The theme of the movie to me is about taking this blank slate, this clean uncorrupted piece of sentience, and put it into a world that is hostile and chaotic and wants to take things from you and deceive you and manipulate you. The parallel isn’t exactly to children, it’s to how the world that we live in is innocent and pure, mixed with this oppressive terror that comes with the natural world...If you assume that the theme of the movie actually isn’t about artificial intelligence, then AI to some degree takes a back seat. When I start making a film, the film becomes more important than the topic. I’ll bend the topic to make the story work better, because I’m not making hardcore science fiction." I'm totally onboard with accepting movies on their own terms and not overthinking things. But Chappie is set in a real country, depicting realistic robotic technology, addressing a real issue of using military technology for civilian law enforcement. Creating a realistic science fiction world comes with its own responsibilities, just as creating a real AI would come with its own responsibilities. The reason the Star Trek universe is so compelling, for instance, is that it was fundamentally conceived from the start to address social issues. Chappie, like many other AI movies, hides from its own themes (and in that regard, again harkens back to Short Circuit). Alex Pappamedas just wrote a thoughtful essay on this point. Which brings me to my final point... Improbable techno-optimism. The tagline of Chappie claims that "Humanity's last hope isn't human," and positions Chappie as a robot with a soul, come to rescue a society that has turned soulless. That sets up the movie as a strong counterpoint to warnings from the likes of Stephen Hawking and Elon Musk that artificial intelligence presents an existential threat to humanity. In her comments to the press, Sigourney Weaver echoed this theme: "The movie has so much to say to us about ‘what is it to be human’? That word is hard to define, because there are so many inhumane acts perpetrated by humans." Hugh Jackman expressed an even more flat-out, pro-AI stance. "If we can create consciousness, it will ultimately be used for good," he reflected. And Blomkamp makes it clear that he does not see a distinction between human and machine intelligence. I asked him about whether he would want to upload his consciousness to a robot. Blomkamp: "Yeah, absolutely! I feel like my association with my physical presence doesn’t really define me. I don’t think I’d be too stressed out about that. And then in terms of living—assuming you could fuel the robot and the code did not degrade, or how you’d save the amount of petabytes of learned information over millennia—then I’d have no problem with that, in fact I’d actively seek that. People who say they wouldn’t want to live forever really weird me out." I applaud a filmmaker willing to explore the optimistic potential of technology and push back against some of the reflexive, wildly premature gloom. I just wish that, in Chappie, Blomkamp had the courage of his convictions and really explored the world that he created. A genuinely conscious machine would be as complex as its creator, and possibly highly unpredictable. That is rich material for storytelling. I'd love to see more of it at the movies, and I wish I'd seen more of it in Chappie. Follow me on Twitter: @coreyspowell