The Red Planet, the Barred Spiral, and the Supernova

Speaking of Mars... I got a note from amateur astronomer Bill Longo recently. On March 19, he went out in the early evening to try to get a picture of a satellite that happened to be passing near Mars in the sky. He took the image below. The satellite isn't in this shot, but he did get more than he bargained for: he saw Mars, the galaxy M95, and the new supernova! 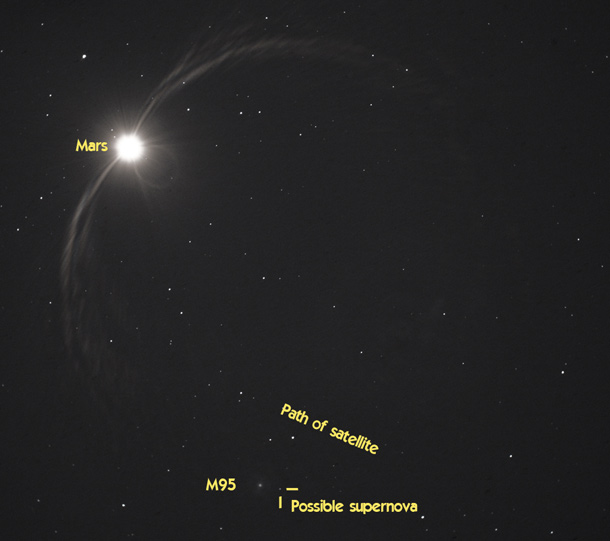 [Click to supernovenate.] That's a happy coincidence. He didn't even know the supernova had gone off until the next morning. He checked the images from the night before, et voila. The picture itself is amazing; Mars was about 400,000 × brighter than the supernova when he took this shot! The two "wings" coming from it are due to internal reflections in Bill's optics. But you can clearly see both the galaxy and the supernova in the image. I've already posted some gorgeous shots of the supernova and the galaxy (see Related Posts below) but I think this may be my favorite. It's not often you see a planet, a galaxy, and a supernova all in one shot... and without the photographer even knowing it at the time!