The Purpose of Harvard is Not to Educate People 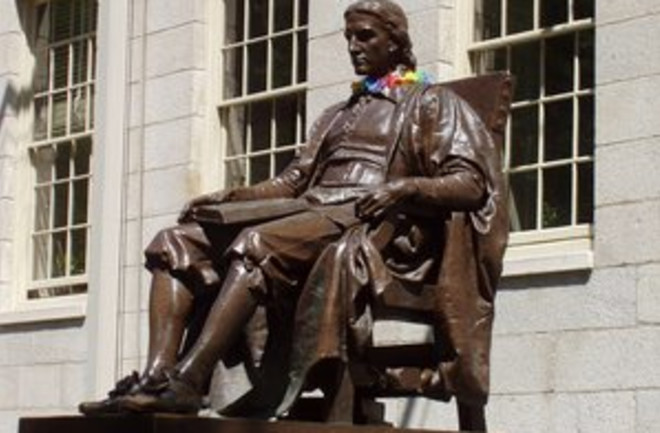 Harvard University's endowment is $35 billion, and some people aren't happy about it. Massachusetts legislators see money that could be theirs, and are contemplating new taxes. Social activists see money that could be going to charity, and want to divert it. Distinguished alumni who have landed at public universities wonder why, with all that cash, Harvard graduates such a tiny number of students. These are all legitimate concerns, and I won't be suggesting the ideal policy compromise. But there is one misimpression that people seem to have, that might as well be corrected before any hasty actions are taken: the purpose of Harvard is not to educate students. If anything, its primary purpose is to produce research and scholarly work. Nobody should be surprised that the gigantic endowment isn't put to use in providing top-flight educational experiences for a much larger pool of students; it could be, for sure, but that's not the goal. The endowment is there to help build new facilities, launch new research initiatives, and attract the best faculty. If it weren't for the fact that it's hard to get alumni donations when you don't have any alumni, serious consideration would doubtless be given to cutting out students entirely. Sure, some would complain that they enjoy teaching, that it keeps them fresh, or that students can be useful as research assistants. But those are reasons why the students are useful to the faculty; they are not assertions that the purpose of the institution is to educate students for their own sakes. Don't believe me? Here is the test: when was the last time Harvard made a senior tenure offer to someone because they were a world-class educator, rather than a world-class researcher? Not only is the answer "never," the question itself is somewhat laughable. This is not a value judgment, nor is it a particular complaint about Harvard. It's true of any top-ranked private research university, including Caltech. (Note that Caltech has over 1200 faculty members and fewer than 900 undergraduate students.) And it is not a statement about universities in general; many large public universities, and smaller liberal-arts schools, take education very seriously as a primary mission. This is by no means incompatible with being a top-notch research institution -- the physics departments at places like Berkeley or UC Santa Barbara would be the envy of almost any private research university. But those places also take their educational mission very seriously, which Harvard, honestly, does not. Of course, certain individual faculty members at Harvard might be great teachers and care deeply about their students; but that's a bonus, not a feature of the institution. (Harvey Mansfield, to a visiting colleague: "You should close your door. If you don't, undergraduates may wander in.") None of this is necessarily good or bad; it's just a recognition of the state of affairs. Harvard et al. judge themselves by the research and scholarship they produce. Students will always keep applying to those places and trying to get in, because the aura of intellectual attainment produced by precisely those scholarly accomplishments will always act as a powerful draw. Such students are by no means making a mistake; the intellectual atmosphere at such places truly is intoxicating, and if nothing else the interaction with your fellow talented students can be a life-changing experience. But to try your best to get into Harvard and then complain once you are there that the professors seem interested in their own work rather than in teaching is to utterly miss the point. And to complain that Harvard has a giant endowment that it chooses to use for purposes other than educating more students is equally misguided.