The Promise and Pitfalls of Extracellular Biochemistry 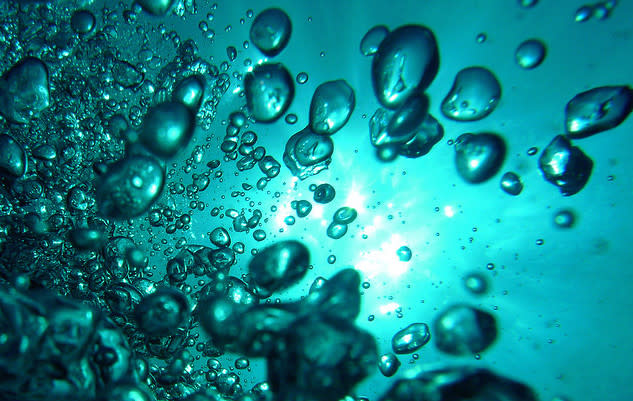 (Image: Flickr/Max Elman) The open ocean can be a tough place for a microbe to make a living. While the clever light-harvesting phototrophs are busy turning solar energy into food, heterotrophs - which eat organic carbon, the remains and products of other life forms - are left waiting for the scraps. With desperation, however, comes bold strategy. In one particularly surprising move, microbes send biochemical machinery outside the confines of the cell membrane, where the fruit of their labor is free to diffuse away from the organism that put in the work to make it all happen. It may seem like a foolhardy approach, but it allows microbes to access an additional source of energetically juicy molecules. Rather than trying to import large molecule chains of hundreds to thousands of carbon atoms, an enzyme can chop the polymer into more manageable bites and bring the monomers inside for a more contained dining experience. It’s the microbial equivalent of taking a fork and knife to a 22 oz steak. These extracellular enzymes - a broad class encompassing amylases, phosphatases, and a range of proteases - can either be attached to the cell surface or freely released into solution. Both scenarios have their upsides: by keeping the enzyme close, you are much more likely to capture the resulting monomers. But by sending enzymes out into the milieu, a broader volume becomes accessible, potentially leading to more reactions. It’s not immediately clear which strategy pays off, and to understand the nuances of different scenarios, a group of scientists at the Technical University of Denmark’s VKR Centre for Ocean Life and the University of Copenhagen developed a computational model simulating a single, floating heterotrophic cell. Along with co-authors Uffe Thygesen, Lasse Riemann, and Colin Stedmon, lead author Sachia Jo Traving stocked the model full of data - including enzyme sizes, reaction efficiency, enzyme degradation rates, and diffusion coefficients - to understand the principles behind these different approaches and determine when one might be more advantageous than the other. To Traving, the model had the potential to answer a longstanding issue in marine microbiology. “Looking at the total amount of dissolved organic carbon floating around in the oceans,” she notes, “it appears to be a vast untapped pool of resources. So to look deeper into why the ocean is full of very old organic material, we started looking at who has the potential to use it and why they might not do it.” When the computational dust had settled, the model revealed that at high environmental polymer concentrations, freely-released enzymes can actually be a productive approach for a single cell. The larger, more carbon-intensive the enzyme, the higher the concentration of polymer is needed to reach the break-even point. But even though untethered extracellular enzymes can be useful, enzymes attached to the cell’s outer membrane were always a better play - the inability of a single cell to reap the harvest of its jettisoned enzymes proved to be the dealbreaker. Nonetheless, the free enzyme approach seems to be a viable strategy. “What people have been observing for years in marine waters,” explains Traving, "is that free enzymes can make up significant portions of the total enzyme activity.” Some have argued that such enzymes are nonspecific leftovers from burst cells, but an alternative option is that a certain density of like-minded microbes flips the switch, making the production of free enzymes more useful to the whole community than the surface-attached approach. What that density is for marine heterotrophs remains a mystery, but it points to a common goods strategy of ocean living. Microbial hermits, meanwhile, would be well-advised to do less sharing. “Our model suggests,” says Traving, "that a lone, independent lifestyle is a viable option for microbes if they just keep their enzymes to themselves."