The Problem of Instructions

Driving to work yesterday, my local public radio station was talking about a recent incident in which a student at Fullerton Union High School was disqualified from a competition by an assistant principal. The student, asked onstage where he'd like to be in ten years, said he hoped that gay marriage would become legal and he could be married to someone he loved. The assistant principle thought this was outrageous and immediately pulled him from the competition. Most interesting to me were the uniformly astonished reactions from the radio voices -- how could it be, in this age of anti-bullying efforts and growing acceptance of homosexuality, that an authority figure could act so callously? You mean to say that there are still grownups out there who are willing to say out loud that homosexuality is immoral? There are. And if you want to know why, at least part of the answer can be found in several discussions popping up in my newsreader about what Jesus thought about homosexuality. Here's a Christian mother who travels the difficult road from hatred to acceptance once she learns that her own son is gay. Here's a theological debate between Ron Dreher and Andrew Sullivan on the precise degree to which sexuality should be considered sinful. And here's a moving speech by Matthew Vines, a 21-year-old man who tries his best to argue that the traditional understanding of the Bible as strongly anti-homosexuality is mistaken (essentially because that would condemn gay people to being tortured and unloved, and surely the Bible wouldn't be in favor of that). Personally I think Jesus probably didn't approve of homosexuality, but since the Gospels were written decades after Jesus died, by people who probably had never met him, I admit the historical record is not exactly definitive. Maybe Jesus was extremely compassionate toward gay people, although that would have been quite out of character for messianic figures from first century A.D. Palestine, so had that been true it would have been worth an explicit mention. It's an inevitable problem when you are committed to taking your moral cues from two-thousand-year-old semi-mythical stories about a charismatic preacher, rather than trying to found them on reason and reflection. Which brings me to the Problem of Instructions. This is a challenge to the idea that belief in God is a plausible hypothesis to help us account for the world, much like the Problem of Evil but much less well known, possibly because (as far as I know) I made it up. I mentioned the Problem of Instructions in our recent debate, but I've never written it down, so here you go. (I have no doubt that analogous issues have been discussed by real theologians.) Let's imagine that we were to take seriously the question of whether the idea of God serves a useful explanatory role in accounting for the reality we experience. What would we do to evaluate this idea? I would argue that we should use the dreaded hypothetico-deductive method. That is, we should try to forget what we actually know of the world, and imagine how the world would most likely be, under the competing hypotheses (1) there exists an extremely powerful, extremely benevolent divine entity who in some sense cares about human beings; and (2) it's just the laws of physics, without any supernatural guidance or overseer. Then we compare those imaginations to the world we actually see, and decide which is a better fit. Obviously there will be many aspects of the scenarios we imagine. Let me just focus in on one: the instructions God would give us if he existed, were very powerful, and cared about us here on Earth. Now, I've written textbooks myself. I understand that it is sometimes difficult to write in a way that is perfectly clear to everyone. On the other hand, I'm not God. I would imagine that God's textbook (if a book were the medium he chose for handing down his instructions, which seems to be the traditional choice) would be fantastically clear. He's God, he can be as clear as he wants! If God existed and cared about us human beings down here on Earth acting in the right way, I honestly believe that the very least he could do would be to make it perfectly clear what that right way was. I would expect God's book of instructions to have several unmistakable characteristics: it would be unique (everyone would know that it was straight from God); it would be crystal clear (no ambiguities of interpretation); it might very well be challenging (no reason to think God's instructions should be easy to carry out); and it would transcend the petty concerns of particular human places and times, conveying a truly universal perspective. God's textbook would get nothing but five-star reviews on Amazon. 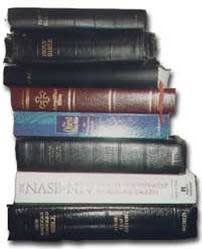 Now, let's compare that to what I might expect if God did not exist. I have no trouble believing that there would still be books that claimed to be straight from God; that's the kind of thing human beings tend to go around claiming. But there would be many such books. Some of them would be monographs from a single purportedly-inspired individual, while some of them would be edited collections of manuscripts collected over the years. In places they would offer good advice, while in other places they would say things that come across as pretty horrible. In parts they would be inspirational, in parts poetic and moving, in parts boring, and very often they would contradict themselves. They would generally reflect the local beliefs and politics of the environment in which they were composed. And, most tellingly, they would be unclear -- some vague snippets of wisdom arranged in an unsystematic fashion, often ambiguous and possible to interpret in just about any way you like. Now that we have our scenarios laid out, we ask ourselves: which of these is more like the real world? Of course there's no question that religious believers can wriggle out of the predictions of this thought experiment; wriggling out of the straightforward implications of belief in God is one of the primary activities of believers. It's not hard to come up with reasons why God's word might seem unclear to us mere humans, or be distorted over the years. And many will claim that God's word is perfectly unambiguous to them -- it's just everyone else that has trouble understanding. All of these apologetics carry with them the implication that God doesn't really care that much about us down here on Earth. If he did, it would be the snap of his divine fingers to set us straight -- absolutely everyone -- on all possible issues of interpretation. Part of being omnipotent is the ability to be perfectly clear if he chooses. We can concoct reasons why God might want us to be challenged by the vicissitudes of life, or face an ongoing struggle to be better people; but there's no reason at all for God to want to keep us in the dark about what being better people actually entails. Religion requires that we believe in a God who wants us to behave in certain ways, but refuses to be clear about what those ways actually are.