The Power and Glory of the Maya Queens

Archaeologists are digging up evidence of unstoppable women warriors 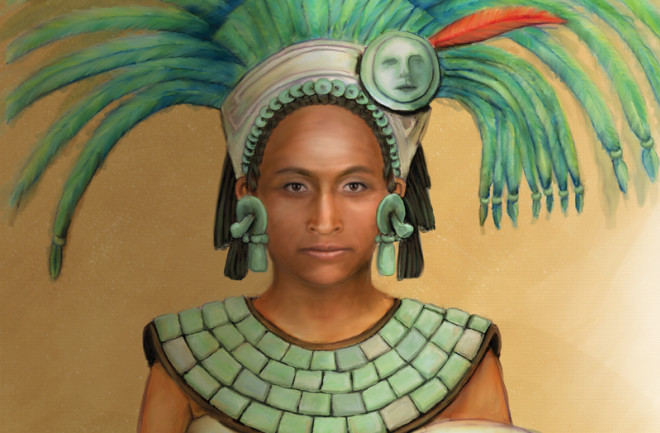 The great pyramids of Naachtun lie shrouded in the emerald forest of northern Guatemala. They are part of one of the most remote, inaccessible sites in the entire ancient Maya world. At the height of Maya civilization, this prosperous city lay in a perilous heartland, caught between two clashing superpowers: Tikal and Calakmul.

To study Naachtun and its alliances in treacherous times, University of Calgary archaeologist Kathryn Reese-Taylor made her way to the site in 2004. For three months, she and an international research team mapped Naachtun’s architecture and recorded ancient texts inscribed on altars and limestone blocks (known as stelae). One of these, Naachtun Stela 18, a massive stone that once towered 14 feet in the air, depicts a fierce-looking Naachtun queen. (See sketch at right.) With a battle shield strapped to her arm, this queen stands majestically on the back of an enemy captive, a lord of Calakmul.

Surprised by this find, Reese-Taylor returned from her trip wondering, “Was it possible that there were warrior queens in ancient Maya societies? Did some royal Maya women actually take part in the violence sparked by ruling houses hungry for power and resources?”

A decade ago, most archaeologists would have flatly dismissed the idea, seeing Maya royal women mainly as marriage pawns, consorts and mothers of kings, says Reese-Taylor, a warm, energetic woman in her early 50s. But now she and other researchers are amassing striking new evidence of warrior queens who may have risen to the heights of battle glory during the latter half of Maya civilization, between A.D. 600 and 800.

Maya artists frequently portrayed the military prowess of their kings by showing them trampling over cowering prisoners. The sculptures that Reese-Taylor found in Naachtun, however, depict both king and queen as conquering heroes, literally crushing into the ground a member of one of the most powerful dynasties in the Maya world. Reese-Taylor combed through hundreds of published inscriptions and royal portraits housed at university libraries in Canada and the U.S., looking for imagery of other warrior queens from the Maya lowlands around Naachtun.

The queen known as Lady K'abel is shown in ceremonial headdress on a 9-foot-tall limestone monument dubbed Waka Stela 34. The Cleveland Museum of Art, purchase from the J.H. Wade Fund 1967

Finding and identifying these women wasn’t easy. Most illustrations and sculptures from the time depicted kings and queens alike in an ambiguous ceremonial garment — a beaded net skirt. Reese-Taylor turned to the work of Peter Mathews, a former University of Calgary archaeologist who specialized in the Maya of Naachtun. Mathews had already started to decode the subtleties of these ancient Maya costumes, noticing that the images associated with the names of women feature warriors dressed in full, loose, calf-length skirts. Men’s garb was tighter and more revealing. Reese-Taylor confirmed this trend, finding the same costume differences in images of queens from several Maya cities beyond Naachtun.

She determined, by identifying characters in loose beaded skirts, that the lowland Maya had many warrior queens. In four Maya city-states — Coba, Naranjo, Calakmul and Naachtun — ancient artists illustrated at least 10 different royal women standing on bound captives or towering over prisoners. Some queens sported symbols of war in their headdresses; others armed themselves with battle shields or waved war banners aloft. And on a famous altar stone from the site of Sak Nikte’, also in modern-day Guatemala, a queen known as Ix Naah Ek’ wore the helmet of the Maya god of war and stood atop a large battle palanquin, or platform, the size of a Macy’s parade float.

Hieroglyphic inscriptions offered clues about the role of Maya queens, too. During the early part of the 20th century, archaeologists from the Carnegie Institution for Science in Washington, D.C., deciphered the dates on a Calakmul stela featuring a warrior queen. This and subsequent similar findings led Reese-Taylor to believe that most of the warrior queens in Maya society rose to power after 623, during a seismic geopolitical shift in the Maya world. Around this time, a northern royal family known as the Kaan or Snake Dynasty moved into the rainforests of the central lowlands, in the middle of the Yucatan Peninsula, explains Reese-Taylor. The Kaan claimed the throne of Calakmul and rose to great power and influence.

This figurine, thought to depict Lady K'abel, was part of a cache of 23 ceramic figures excavated from a burial site at El Peru-Waka' in 2006. Jesus Lopez

As Reese-Taylor began sifting through more hieroglyphs looking for inscriptions and dates associated with queens, she determined that the northern Maya dynasties prized their female ancestors, and the Kaan seem to have placed great value on royal women. After 623, Kaan princesses married into many local ruling houses in the lowlands, carrying these new ideas with them. There was “a real expansion of the role that women played in politics,” says Reese-Taylor. “A woman’s role was not in the background. It was up front and center.”

Then Reese-Taylor found the epigraphic, or inscription, work of Maya scholar Linda Schele, which revealed that at the height of the rainy season in 682, a Maya princess from Dos Pilas, in what is now west-central Guatemala, arrived in the shattered city of Naranjo, just west of the Belize-Guatemala border. Enemy kings had long fought over the region’s lucrative river trade. The king of Dos Pilas dispatched his daughter, Ix Wak Chan Ajaw, to marry the king of the region. While this leader died shortly after marriage, he left Ix Wak Chan Ajaw in charge. She did not disappoint. Deftly stepping into the throne, she launched eight major military campaigns over five years, torching the cities of her enemies. Her early battlefield record helped Reese-Taylor understand the trajectory of women warriors through Maya history.

Ix Wak Chan Ajaw was not the only Maya princess who scooped up the reins of power. Reese-Taylor’s attempt to piece together the history of Maya queens brought her to archaeologist Traci Ardren at the University of Miami. Ardren, too, has sifted through evidence from royal tombs and inscriptions, searching for traces of female rulers. In all, she says, excavators have recorded nearly two-dozen tombs of royal women.

While some, such as a burial chamber found at Nakum, west of Naachtun, are relatively modest, containing only a few painted pots, others clearly advertise the great wealth and influence of the occupant. At Copan, to the south, for example, fifth-century mourners dressed their dead queen in burial garments shimmering with precious greenstone beads, shell ornaments and feathered bird heads, and they laid her to rest on a massive carved funerary slab in what is known today as the Margarita Tomb. Then they sprinkled her remains with costly imported red pigments from the minerals cinnabar and hematite.

Ardren has “brought together studies from throughout the ancient Maya world to show that women were not sidebars in Maya society, but significant actors in their own right,” says Reese-Taylor, who is now building on Ardren’s work as she looks for clues about powerful queens who were also fierce warriors.

In 2012, more evidence emerged from Guatemala. While excavating the ancient royal Maya city El Peru-Waka’, archaeologists from Washington University in St. Louis uncovered the tomb of a royal woman. Her bones lay resting beneath a shrine, surrounded by jewels and two figurines. Hieroglyphs nearby indicated her name was Lady K’abel, also known as Lady Waterlily-Hand and Lady Snake Lord. Lady K’abel’s name had been etched on a seventh-century stela next to a picture of a woman dressed in royal garb, and holding a warrior shield.

For Reese-Taylor, Ardren and many others, these new findings reveal much that previous researchers have missed when it came to Maya queens. “I think it shows that power was a lot more complicated than our models have suggested,” concludes Ardren. “And clearly we have a long way to go in understanding the biographies of the most extraordinary women.”

By analyzing hieroglyphic inscriptions and illustrations of costumed queens, poring over evidence from royal tombs and reconstructing royal dynasties, Reese-Taylor and her colleagues have revealed for the first time how some Maya queens ruled alone in turbulent times, securing their dynasties and their kingdoms from usurpers, while others led their subjects to war, presiding over battles of attrition against enemy kings. “These queens are really important,” says Reese-Taylor, “and we had just given them lip service before.”

[This article originally appeared in print as "The Power & Glory of the Maya Queens."]