“Let’s suck away!” physicist Paul Quinn announces, flipping the switch on his stove-top vacuum cooker. There’s a long, low gurgling noise as a gauge registers the pressure drop inside, and the sound of muted machine-gun fire rattles the pot. Almost immediately, Quinn’s lab at Kutztown University in Pennsylvania is permeated with 2-acetyl-1-pyrroline, the aroma given off by popcorn as it cooks. Eight minutes later, he removes the lid to reveal a pot brimming with fresh Orville Redenbacher’s. Though it’s not apparent until the contents are poured into a graduated beaker, this popcorn has almost twice the volume of regular stove-top popcorn.

Depending on their structure, corn kernels pop in a variety of ways. Heirloom popcorn (far right), is prized for its flavor, but it’s less than half the size of today’s hybrids. Breeding has also reduced the number of unpopped kernels by as much as 75 percent. 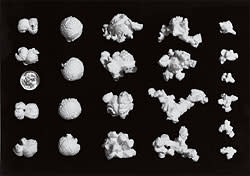 The popcorn industry measures its product in three ways: the volume of the flake relative to its unpopped mass, the percentage of popped kernels, and the amount of popcorn that can be harvested per acre. In the past half century, thanks to rigorous breeding, all three of those numbers have increased dramatically. Indeed, popcorn ranks among the greatest agronomic successes of the 20th century. Today the best popcorn pops twice as big as the popcorn of 50 years ago and leaves as little as one-fourth as many unpopped kernels, called old maids. And because popcorn is one of the only products bought by weight and sold by volume, bigger flakes translate into bigger profits.

Vacuum popping is only the most recent development in a long quest for popcorn perfection. Quinn is normally a theoretician who wrestles with problems of granular materials, such as how sand piles form and why Brazil nuts always end up at the top of mixed-nut cans. Eight years ago, however, his graduate adviser at Lehigh University, Daniel Hong, attended a physics conference in Minnesota and came back preoccupied with popcorn. Hong was convinced that a simple model of adiabatic expansion—the rapid diffusion of gas that occurs, for example, when a balloon bursts—could explain what happens when popcorn kernels explode. He put Quinn and another graduate student, Joseph Both, to work on the math. Quinn and Both realized that the pressure differential between the inside and the outside of the kernel would be a critical factor in determining the size of the popped flakes. If they could decrease the pressure inside the pot, they figured they could make monster popcorn. Quinn and Both finished their dissertations and left Lehigh before completing their tests with the popper. When Hong died of complications from a liver transplant in 2002, Quinn decided to honor his late teacher’s memory by finishing the experiment.

Vacuum popping builds on a century and a half of research into why popcorn pops. According to Andrew Smith, the author of Popped Culture: A Social History of Popcorn in America, some scientists thought popcorn owed its pop to the oil in the kernel. Others thought the kernel’s moisture content was the critical factor. Still others were convinced that the secret of the kernel’s explosive ability could be found in its starchy endosperm or else in the structure of its tough outer shell, called the pericarp.

It wasn’t until 1993 that a group of Brazilian scientists definitively established the differences between popcorn and other varieties. They found that the pericarp of popcorn kernels was four times stronger than that of regular corn, allowing for  higher pressure and a bigger pop. The popcorn pericarp is also nearly twice as good at transferring heat to the kernel’s core, meaning popcorn kernels can get very hot without their shells burning up. The Brazilian scientists skinned the kernels of their hulls and puffed up the starchy endosperm in a pressure chamber—the same way Kellogg’s makes Corn Pops. They found that popcorn starch was about 60 percent puffier than regular corn endosperm. Recent research suggests that these differences are likely the result of only a handful of genes.

Over the past few years, scientists like Quinn have applied themselves to the task of creating bigger, tastier popcorn flakes, but their results can be maddeningly inconsistent. In 1999 a pair of Indian researchers found that microwaving popcorn in 10 percent oil, 2 percent butter, and 0.5 percent salt produced the largest flakes (that translates to about a teaspoon of oil, a fifth of a teaspoon of butter, and a pinch of salt for every quarter of a cup of kernels). More recently, Turkish food scientists Ersan Karababa and Mehmet Ceylan found the optimal mix contained eight times as much butter and almost half as much oil. Four years ago, a group at California State University at Long Beach claimed that the biggest flakes spring from kernels with a moisture content of 11 percent. Last year, Sabri Gökmen, another Turkish cerealist, demonstrated that the optimal moisture level was 14 percent. Researchers also argue over which popping method—stove top, microwave, or air popper—produces the biggest flakes. But since some kernels are bred specifically for the inside-out cooking of the microwave while others are naturally suited to stove-top popping, this can be like comparing apples and oranges.

Kenneth Ziegler, who until February ran the country’s last academic popcorn breeding facility, at Iowa State University, says the variations are natural. “Popcorn is a biological entity. Anything goes.” Each kernel of popcorn is an “individual pressure cooker,” Ziegler says. As the kernel heats up, a small amount of water trapped inside the hull vaporizes, turning the starchy guts of the kernel into a molten mass. When the pressure inside is great enough, the kernel explodes, shattering its pericarp like a shrapnel grenade. The gelatinous starch instantaneously solidifies as it leaves its shell.

The power of this pop is greatly increased in modern hybrids, but not everyone is convinced that bigger is better. “I don’t think there’ve been improvements. There’ve been de-improvements,” says Smith, who considers himself a popcorn connoisseur. “You should be able to taste a corny taste in popcorn. You could 30 years ago. It tasted like it smelled. If you seal your nose and put today’s popcorn in your mouth, it tastes like cardboard.” In fact, that corny taste, tinged with nutty overtones, has been bred out of commercial popcorn intentionally because it conflicts with the flavor of artificial additives and because it’s tough to grow big, high-yielding crops that are also tasty.

“I consider the Orville Redenbachers of the world—the big commercial brands—fit for packing material and little else,” says a disdainful Marc Moore, owner of Crown Jewel Popcorn, a mail-order company that caters to the community that still wants the smaller, old-fashioned corny popcorns. Purists like Smith and Moore see the quest for size as industry’s deal with the devil: In return for bigger pop and bigger profits, commercial breeders now cultivate hybrids that are just bland sponges for other flavors. “Americans don’t want popcorn. They want butter and salt,” Smith says. “Do we demand flavor in our popcorn? There are about 10 of us who do.”

Quinn’s vacuum popper could offer the best of both worlds. In theory, it can turn even the most clenched heirloom kernels into fluffy, oversize popcorn, and it produces very few old maids. For now his prototype popper can’t beat industry’s best or the microwave. Quinn is convinced, though, that vacuum popping will catch on, as soon as he figures out how to tweak the engineering. He recently constructed a new device using two dog-food bowls and an off-the-shelf microwave that he says will pop even bigger flakes. While he’s waiting for the patent to come through, he’s tight lipped about its performance. All he will say on the record is that “results are promising.” Whether that means tastier, or just bigger, remains to be seen.  Popcorn was first popularized in the United States in the early 19th century, when it was probably brought back from Chile by whalers. In the Southwest, it has been around far longer. In 1948 a team of archaeologists discovered a 4,000-year-old cob of popcorn in a New Mexico cave. Remarkably, the kernels still popped.