The Physics of . . . Deep-sea Animals

The other night, out in the Indian Ocean, the research team aboard the R/V Knorrdid what oceanographers invariably do when they're in deep water— they lowered a bunch of Styrofoam cups over the side. In their search for hot springs on the seafloor, the team had also been lowering more serious gear, of course, such as Jason the deep-diving robot, or the water sampler to which they tied the cups. But Styrofoam cups make great souvenirs: When you haul them back from the deep, you know where they've been.  The cups and all the decorations you've drawn on them— sharks, erupting undersea volcanoes, witty slogans ("My dad went to the bottom of the Indian Ocean, and all I got was this lousy cup")— come back very, very small. Styrofoam heads from a hat store would work even better than cups, but nobody on the Knorr had bothered to bring any of those. On Earth's comfortable surface, we are so accustomed to atmospheric pressure— 14.7 pounds of air lightly caressing every square inch of our bodies— we don't even feel it. But the ocean is made of denser stuff. As you dive down in it, the pressure increases by the equivalent of one atmosphere every 10 meters, or 33 feet. At 10,000 feet, roughly the depth to which the research team lowered the cups, the pressure is 300 atmospheres, or 4,400 pounds per square inch. That kind of pressure you would feel: Imagine trying to breathe with the entire NFL and NBA standing on your chest— with the United States Congress (House and Senate) thrown in for good measure. That kind of pressure squeezes the air out of Styrofoam, too, which is why the cups can shrink to around the size of a thimble. The human body, being mostly water, would be crunched a bit but not crushed by deep-sea pressure; it is our insistence on keeping air in our lungs that keeps us from diving deep. We can reach the abyss only in submersibles like Alvin, which maintains a pressure of one atmosphere inside its titanium passenger sphere, or vicariously, through television cameras carried by tethered robots like Jason. Though we walked on the moon three decades ago, we'll probably never walk on the deep seafloor. And yet all sorts of other organisms thrive at high pressure. Some of them are even air-breathing surface dwellers like us. Weddell seals and elephant seals can dive up to a mile (sperm whales go much deeper than that). All these animals seem to share the same secret: Instead of fighting the pressure, they let it collapse their lungs completely. Some oxygen remains in their lungs, but they mostly store it in their muscles, where it's needed; their muscle tissue contains much higher concentrations of oxygen-binding myoglobin than ours does.  Moreover, collapsed lungs give deep-diving mammals another big advantage, as a team led by Terrie Williams of the University of California at Santa Cruz reported last year. Once a seal's lungs have collapsed, it becomes heavier than water, and so it sinks. Thus it doesn't have to flap flukes or flippers all the way down; it reaches great depths mostly by gliding effortlessly, saving its oxygen stores for the strenuous climb back to the surface. The deep seafloor itself, well beyond the range of diving mammals, is inhabited by an incredible diversity of animals. Some of the fish even have lunglike swim bladders to control their buoyancy: They move up in the water column by secreting gas into the bladder and inflating it, and down by reabsorbing gas into their blood. With Jason, the researchers aboard the Knorr have observed such fish hang motionless a few feet above the seafloor. But they've made no effort to bring the fish up to the ship, because they know the results would not be pretty. A swim bladder doesn't collapse at depth because the gas inside is at the same pressure as the water outside— which means if that external pressure suddenly decreases, the bladder will swell catastrophically. "When we bring a fish up from depth, its swim bladder is often sticking out of its mouth," says Shana Goffredi of the Monterey Bay Aquarium Research Institute. "So those animals don't fare so well." 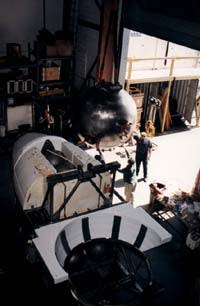 Alvin's computers, navigation instruments, and passengers are encased in a lightweight, corrosion-resistant titanium sphere (top) that can safely withstand 440 atmospheres, or about 6,500 pounds per square inch. Such pressures are powerful enough to miniaturize a Styrofoam cup. Photographs: top, courtesy of Dave Gray/WHOI; bottom, courtesy of Tom Kleindinst/WHOI

That's a general problem in deep-sea biology: To fully understand how deep-sea animals adapt to their environment, researchers need to get them to a lab alive, which is somewhere between difficult and impossible— even for the myriad invertebrates that lack swim bladders. "Most of them die when you bring them up, and we don't really know why," says marine biologist George Somero of Stanford's Hopkins Marine Station. Only a few deep-sea organisms have been kept alive at the surface for more than a few days. That includes the giant tube worms that Goffredi and her Ph.D. adviser, Jim Childress of the University of California at Santa Barbara, plucked from hot springs on the Pacific seafloor and maintained in a titanium pressure vessel. And Art Yayanos of the Scripps Institution of Oceanography once collected bacteria more than 6 miles down in the Mariana Trench— where the pressure is more than 1,000 atmospheres, or 15,000 psi. Yayanos subsequently found that these bugs won't grow at a mere 380 atmospheres' worth of pressure, let alone one. Yayanos, Somero, and others have discovered a few of the adaptations that permit deep-sea bacteria— and the cells of higher organisms— to thrive under high pressure. For one thing, deep-sea creatures make their cell membranes of squishier stuff. Cell membranes are layers of lipids (fats) penetrated by proteins that, among other functions, channel nutrients, wastes, and signaling molecules in and out of the cell. If the lipids are too rigid, the channels close up— and high pressure, like low temperature, makes any kind of fat more rigid. "So deep-sea animals and bacteria tend to build their membranes with relatively fluid lipids," says Somero. "Instead of butter they use something more akin to vegetable oil." That is, compared with surface-dwelling organisms, they use more unsaturated and less saturated fat.  When such an organism is brought to the surface, thus taking the congealing pressure off its lipids, it may start to ooze a bit internally. The animals that don't die right away often suffer neurological impairment— like the little crabs researchers have caught with Jason. Occasionally one of them will muster the strength to pinch the finger of one of its captors, and a human cry of pain will echo through the main lab of the Knorr. But mostly the crabs, though still alive, sit motionless or stagger around sluggishly.  A loss of integrity in their nerve cell membranes could explain the crabs' symptoms— it would induce chaos in the traffic of chemical signals between nerve cells. "Their membranes probably get quite leaky," says Somero. Conversely, when humans are subjected to high pressure, nerve cell membranes probably don't leak enough. The results are similar: We lose muscle coordination and eventually black out.  Although the deep-sea world is radically different from ours, the ways that creatures have adapted to it are often surprisingly subtle. They often have the same metabolic enzymes as humans, for instance; it's just that their enzymes seem able to change shape— to bring molecules together and get them to react— without changing volume much. That way they avoid a futile fight against the high pressure. A couple of genetic mutations might be enough to produce an enzyme that's pressure-resistant. But many details of how deep-sea animals get by at such high pressures are not really known. One fact is well established, though. They use Styrofoam very sparingly. 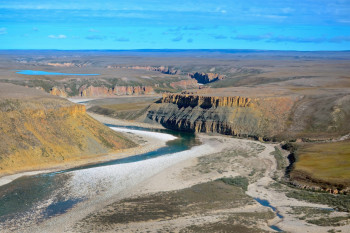