The Physics of Christmas: Wormholes and Other Tricks Santa Might Use to Get His Job Done

What if Santa was a brilliant physicist? 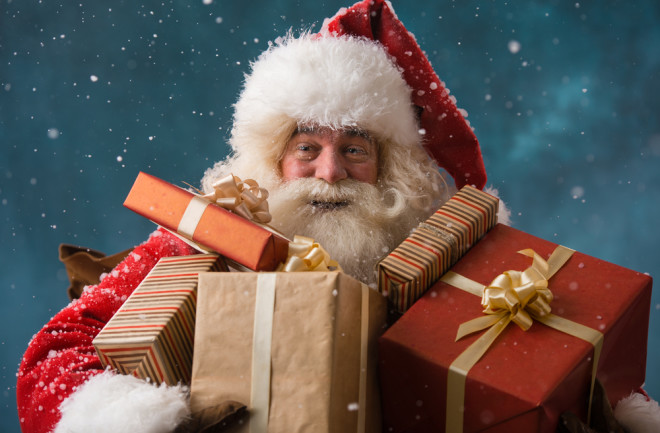 What feats of physics must Santa perform to deliver presents to your house come Christmas? (Credit: Milles Studio/Shutterstock)

The jolly old elf known as Santa Claus seems to have been cursed with an impossible task: deliver millions of presents to specific locations scattered across the surface of an entire planet.

As all good kids know, the man in the red suit always seems to pull his task off with aplomb. It’s an admirable feat, but it does strain our credulity, not to mention the laws of physics.

But perhaps Santa is more than an elf — perhaps he’s also a brilliant physicist. With some back-of-the-back-of-the-envelope calculations (and some generous assumptions about currently theoretical concepts), there might yet be a way for Santa to complete his task without resorting to fiction. We turned to physicists to find out.

In what might be the easiest solution, Santa could use wormholes. Wormholes are like tunnels through space-time, shortcuts that would allow Santa to travel enormous distances so quickly that his efforts would be indistinguishable from magic.

Wormholes are theoretically possible (Einstein’s special relativity allows for them), and they would be the optimal strategy for Santa, says Dan Holz, a professor of physics at the University of Chicago.

Without using wormholes, Holz says, Santa would have to travel near the speed of light to deliver his gifts in one night. The constant acceleration and deceleration Santa and his toys would have to withstand going to and from each house would be problematic — it would kill a normal human. That is, unless “you have a very impressive sleigh and Santa is a very impressive specimen.”

However, by using wormholes, Holz says, Santa could skip all of the starting and stopping. “Santa can keep going through a wormhole, doing what needs to be done at whatever leisurely pace he prefers — and given his belly, it’s easy to imagine that’s the option Santa would take.” On the downside, Holz says, wormholes require a form of matter that probably doesn’t exist.

Another strategy for Santa would be to travel back and from the North Pole to his destinations carrying just enough presents to complete one mission at a time, although even carrying just enough toys for three households would require Santa to travel faster than the speed of light, says John Freeouf, a professor of physics at Oregon’s Portland State University.

We don’t have the ability to create wormholes, and acceleration would create a major problem both for Santa and his packages, says Rhett Allain, associate professor of physics at Southeastern Louisiana University. So, Santa’s mission might require magic. But, on the other hand, “maybe magic is just physics we don’t understand yet.”

But “what about a preemptive strike?” Allain proposes. “During the year, Santa makes nanobots and they move around all over the world. And when he’s ready, they 3D-print packages in the kids’ houses.” This solves the problem by getting the mass there slowly, rather than all at once.

However, Holz says, using nano-elves means Santa is less involved. “I really like the idea of Santa eating the cookies, but [instead] the nanobots would take the cookies to use as the raw material to build the toys.”

Many Worlds, Many Santas

Could Santa use other universes? The many-worlds interpretation of quantum mechanics asserts there is a multitude of universes parallel to the one we live in.

“You can imagine there are many universes,” Holz says. “There is always some universe where Santa has shown up at your house and given you a present. But what we want to do is have Santa show up at every house in this universe.

“Maybe it makes you feel better to know that in some universe you got a present,” Holz says. “But for most kids, what they care about is the universe they’re currently experiencing and whether they got a present in that universe.

“You could have a philosophical discussion in the morning with the kids,” Holz says. “You could say you’re sorry they didn’t get any presents, but … there is definitely a universe out there where they got a present and they got exactly what they wanted. The multiverse would say that’s true, but I have a feeling that for most kids, that’s cold comfort — and for most physicists as well.”

Allain says he uses examples like Santa to teach physics. They create an emotional investment in students.

“As educators, we lie all the time,” Allain says. For example, many teachers tell students that gravity is equal to an object’s mass multiplied by the gravitational constant (it’s actually more complicated than that). “That’s a good model, but it’s not the full story. We can make the models more complicated, but we try to keep it as simple as possible,” he says.

Santa, Holz notes, is a relevant approximation of what’s actually happening: parents providing the gifts and eating the cookies. As parents, he says, you’re using what physicists call a black box, where there are some processes under the hood that are not relevant to, in this case, what’s under the tree.

But “it’s nice to have some magic in one’s life and to call that black box Santa,” he says.