The Physics of Beckham

I had a great time in England, visiting my parents and catching as much of the World Cup as was reasonable. On Tuesday night we watched England as they managed a draw against Sweden to finish the first round at the top of their group, ensuring a second round match-up against Ecuador on Sunday. I'll be watching that one back in the U.S., since I flew back yesterday, and although I'll enjoy it, it won't be quite the same as watching the game back in England. Despite his reputation, David Beckham hasn't really been pulling his weight in my opinion. Nevertheless, there have been a few moments of that wonderful Beckham touch, such as the one that led to the very first goal in England's first game against Paraguay. 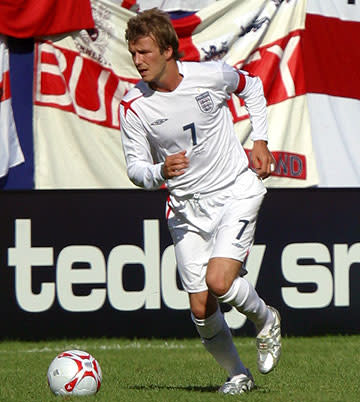 For those of you unfamiliar with Beckham's specialty, it is the perfectly weighted curving ball, sometimes used as a direct shot on goal from a free kick, and other times used from a corner to land precisely on the head of a waiting striker. Since in both cases Beckham strikes the ball from a stationary position (the ball that is, not Beckham, I should point out in uncharacteristically David Foster Wallace-like style) after other players have positioned themselves strategically (a set piece), he is often referred to as a "dead-ball specialist". The extent to which the path of the ball curves is particularly impressive, and is the source of the title of the well-known 1998 2002 movie Bend it Like Beckham. Here's a clip to show you what it looks like. Anyone who plays football knows instinctively (by which I mean through extended practice and through watching experts do it) how to curve a ball. The trick is to put an appreciable amount of spin (or "english" for all you American pool players) on it, while being sure to strike the ball hard enough so that it goes some distance over which the spin can have its effect. But the kids out there (and most of the adults, I'm guessing), have no idea why this works. So if you fall into this category, or you know someone who does and you're looking or a resource to help explain it to them, SoccerBallWorld has the site for you. The site contains an online version of a wonderful article that was first published in Physics World magazine, June 1998 pp25--27. You can read over the FAQs about the physics of soccer balls. For example, you might be interested in the whether atmospheric pressure affects how soccer balls fly - an important question given the very different places World Cup finals are held. You'll be told that

But let's face it, you're almost certainly there because you feel in your bones that England will win the World Cup (OK, you always feel this way, but surely it'll be different this time, won't it?), and want to understand the physics behind Beckham's contributions. Right? If so, then you'll want to start off reading about the aerodynamics of soccer balls; Bernouilli's principle; the Magnus effect; the lift force and the drag force; and laminar flow. Once you've absorbed that, then you might want to read on about the work that Japanese researchers at Yamagata University performed using finite-element analysis to simulate how people kick footballs. Finally, at this point, you should have a decent understanding of the Physics of Beckham. Having done your solemn duty as a physicist, you are now free to sit back and watch England play Ecuador in the second round at 11am EST on Sunday. I love the World Cup. [

Update: Jorge Pullin pointed me to this very cool site (in Spanish) about the physics of football. (Also, England won against Ecuador.)]