The Philae Comet Lander Has Awoken From Hibernation 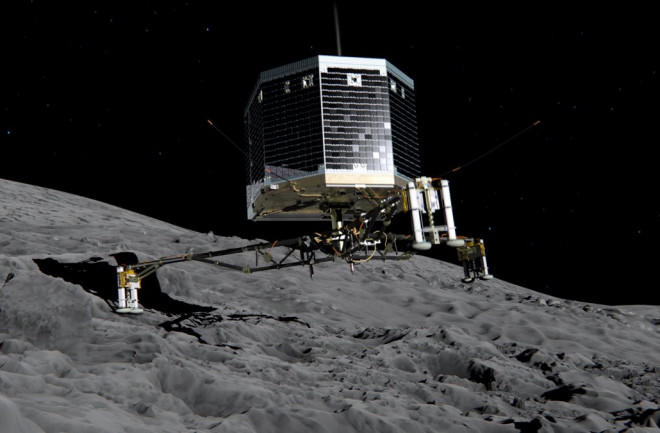 An artist's rendering of the Philae probe on Comet 67p/Churyumov-Gerasimenko. Credit: ESA/ ATG minilab It was a thoroughly modern announcement: before a blog post or a news conference there was the tweet. The Philae lander on Comet 67P tweeted the message, "Hello Earth! Can you hear me?" at 5:30am EDT today by way of announcing that the months of wait were over, and the lander had resumed operation. Scientists have been trying to regain contact with Philae since mid-March, listening for signals via the orbiting Rosetta spacecraft. Now the hope is that the lander will make contact again and scientists can download some of the data it has been collecting in the meantime.

Hello Earth! Can you hear me? #WakeUpPhilae

After not quite sticking the landing on its 4 billion-mile journey to Comet 67P/Churyumov-Gerasimenko last November, the Philae lander managed to complete its primary science mission in just 64 hours before losing power. It conducted all the planned experiments and sent the data to Earth, including the first images ever taken from a comet’s surface. The lander lost power because its solar panels were lying in shadow, but the hope was that the obstructions might melt as the comet neared the sun, allowing Philae to return to life. Today scientists confirmed that for 85 seconds yesterday Philae "spoke" with its team on ground, in the first contact since going into hibernation in November.

As Comet 67P nears the sun — its closest approach hits in August — its ice and dust will continue to shed, offering both Philae and Rosetta spectacular opportunities for data-gathering and photos. But presently, ESA scientists' hopes for the lander seem to be more modest: Re-establish contact, download some data, and learn a little more about the comet the lander calls home.