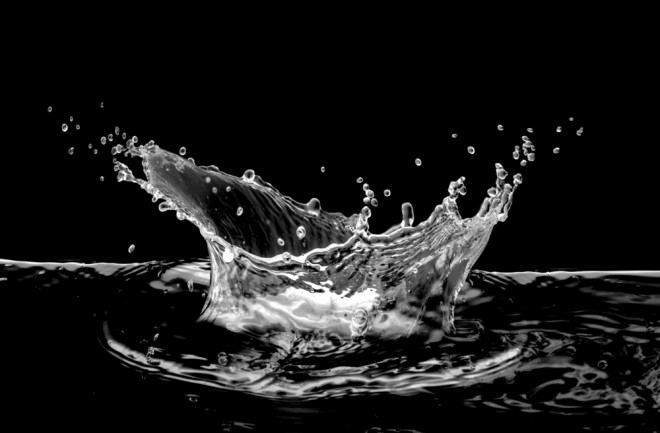 In recent years, biochemical laboratories have shrunk thanks to a technology called microfluidics. This is the ability to pump liquids though tiny labyrinthine corridors carved into silica chips and then to mix, react and separate them on a microscopic scale. So techniques that previously required an entire lab bench can be done on a microscopic scale using a microfluidics chip.

These plastic chips contain complex warrens of corridors, pumps, mixing chambers, assay areas and the like. But sitting on top of these plastic chips are integrated circuits that switch pumps on and off, and open and close corridors and so on. This circuitry is the brains of the microfluidics chip and the need to incorporate this electronic machinery and fluid mechanics significantly increases the complexity of the devices.

Now that looks set to change thanks to the work of Daniel Case at Northwestern University and colleagues. The team has found a way to control, switch or even reverse the flow in these corridors without any electronic control.

“These findings have the potential to advance development of built-in control mechanisms in microfluidic networks, thereby facilitating the creation of portable systems that may one day be as controllable as microelectronic circuits,” says the team.

The principle behind this new fluidic behavior is relatively well known in network science: Braess’ paradox. An example of this phenomenon is when the closure of a major road leads to an increase in the flow of traffic or the addition of extra roads reduces the overall flow.

For example, New York City’s transportation department in 1990 closed 42nd Street to celebrate Earth Day. This road is often jammed, so New Yorkers were expecting the worst. But, to everyone’s surprise, the traffic flow actually improved.

This kind of paradoxical behavior turns out to be common. It occurs in power networks, food webs and even in the network created by the passage of play in certain sports. During the 1998 NBA playoffs, the New York Knicks lost their best player to injury but ended up playing even better. The reason is probably Braess’ paradox.

It comes about because a network itself influences the flow through it. So a major road attracts cars, even if there are quicker routes available. Close it and the traffic is forced to explore other, quicker routes. Conversely, a new road can attract so much traffic that it creates jams.

Equally, the best player on a basketball team can attract the ball in a way that the opposition can target. Lose him or her and the ball must move in a different way through the team, creating a different type of play that is harder to defend.

This is exactly the phenomenon that Craig and company have exploited in microfluidic networks. In ordinary circumstances, the flow is linear — increase the pressure and so does the flow.

But Craig’s team discovered how to make this flow through a specific pattern of corridors nonlinear. This pattern is essentially two long corridors connected in the middle by a third corridor, creating an H. So liquid can flow down both long corridors, across the connecting corridor and then out at the bottom of the corridors.

The team introduce the nonlinearity by placing cylindrical obstacles into bottom half of one leg of the H network. This causes turbulence in that leg that makes the pressure vary nonlinearly.

The team found that varying the difference in pressure between the top and bottom of the H led to a variety of interesting, repeatable behaviors. For example, they could reverse the direction of flow across the connecting corridor merely by changing this pressure difference. In other words, they could use it as a switch.

And they found that at some pressures, the total flow through the H increased when the connecting corridor was closed. In other words, they could increase the flow through the H network by closing a corridor; that’s exactly analogous to New York’s experience with 42nd Street and the Knicks.

“We show that these networks exhibit an experimentally supported fluid analog of Braess’ paradox, in which closing an intermediate channel results in a higher, rather than lower, total flow rate,” they say.

But they hint at something much more exciting. If the H networks can act like switches, it’s not a huge stretch of the imagination to connect them together in a way that can perform logic operations. And if that’s possible, then it may be feasible to build this kind of logic into microfluidic circuits themselves.

Craig's team doesn’t quite go that far. There is clearly a great deal of complexity in this kind of fluidics that will have to be understood before it can be controlled or exploited in this way.

But in the meantime, microfluidic devices should become smaller, cheaper and more capable. The work of Craig and his colleagues certainly paints an optimistic future in that respect.