The Other Astronomical Breakthrough That Took 100 Years to Achieve 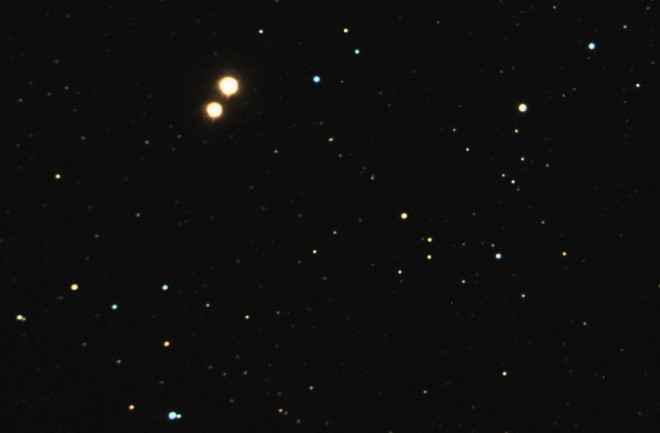 The binary star system, Cygni 61, is seen here in the upper left portion of the image. Friedrich Bessel in 1838 measured the system's distance from Earth at About 10.4 light years, which was very close to the actual distance of about 11.4 light years. It was the first distance estimate for any star other than the sun. It was also the first hard evidence of the trigonometric parallax. (Credit: Pepe Manteca/Flickr) Well, here we are two weeks into the era of gravitational wave astronomy. I trust that by now you have read and heard all about the LIGO discovery of gravitational waves from two black holes merging and what it means for astronomy. These are indeed exciting times and it is worth pausing to think about this announcement in the context of other big astronomical discoveries that were generations in the making. Perhaps the best historical analog for the gravitational wave search and detection is the search for the trigonometric parallax, or a method to measure the distance to stars. Its existence was long theorized, but observational evidence was harder to come by.

After the work of Kepler and Galileo in the first decade of the 17^th century it was apparent that foreground stars should shift position relative to background stars when viewed from our orbiting platform. Galileo doesn't appear to have undertaken this search, as he likely understood that the telescopes he had available were not sufficient for the task. Why would they have been insufficient? Even the nearest stars are so distant that their apparent shift is only a couple ten thousandths of a degree. Hold your finger out at arm’s length and a ten thousandth of degree would be length of a typical bacterium on your fingernail. Atmospheric turbulence washes out star images to a diameter four times that and makes the images dance erratically. The lenses available to early astronomers made the situation worse and stable telescope mounts were hard to come by. Galileo cautioned would-be observers “… the instrument must be held firm in order to escape the shaking of the hand that arises from the motion of the arteries and from respiration itself…”

Our Place in Space

The first serious attempt to measure parallax was likely Robert Hooke’s in 1669 and some might doubt just how serious that attempt was (I am certain that Isaac Newton would have questioned the effort). James Bradley, working in the 1720s, might offer a better starting point for serious work on attempting to observe parallax.

Every six months, the Earth moves nearly 186 million miles from one side of its orbit to the other. This gives observers two different lines of sight to a nearby star, as seen against more distant stars. (Credit: Measuring the Universe) Bradley was able to show that the star he studied had to be at least three light-years away and that any parallax signal lay hidden under stellar aberration, an apparent motion of the stars caused by the earth moving through space. Bradley learned he had to tilt his telescope slightly in the direction of Earth’s motion to keep the star centered, just as you might tilt a glove to catch a falling baseball on the run. If our only goal in observing parallax had been to verify that the earth is in motion this observation surely did so. But more generations of astronomers would come and go before we actually observed trigonometric parallax. William Herschel, discoverer of Uranus, was one of the more notable to try. He believed the best way to observe the subtle shift in a star’s position was to observe closely-spaced pairs of stars with one bright component and one much dimmer. If stars don’t vary much in intrinsic luminosity then the fainter star is likely much further away. To his disgust he found that most of the pairs he observed over a long period of time were showing signs of orbit around one another. He had discovered many binary stars, some that are just now completing a full orbit. Herschel didn’t know it but he provided the precise data necessary to measure the masses of stars of varying color, the critical first step in our understanding of stellar structure and evolution.

Friedrich Wilhelm Bessel (Credit: Wikimedia) Friedrich Bessel finally accomplished the parallax observation in in 1838, just over a century after the search began in earnest and more than two centuries after Kepler and Galileo worked. By that time there was little dispute over the heliocentric nature of the solar system. The observation was still key, not only because it set the size scale for the universe but also because astronomers wanted to finally measure it. He observed the minuscule back and forth movement of the star 61 Cygni in comparison others in the background. Bessel's calculations corresponded to a distance from Earth of roughly 10.4 light-years, which is close to the modern measurement of 11.4 light-years. His finding drove home the sheer three-dimensional scale of the universe, and confirmed something we knew for some time. Likewise, general relativity has become so firmly established in the past century that fewer and fewer astronomers doubted its validity in broad terms. There has been pretty good indirect evidence for gravitational waves for a while. More than three decades ago, observations of binary neutron star system PSR 1913+16, first observed in 1974, made it clear that the orbital period of this system was getting smaller at a rate, about 76 millionths of a second per year, that was perfectly consistent with the expected amount of energy being radiated away in the form of gravity waves. So significant was this indirect detection of gravity waves that pulsar discoverers Russel Hulse and Joseph Taylor won the Nobel Prize in 1993.

Few and Far Between

Big and sudden observations like that announced by the LIGO team earlier this month happen only occasionally. In my 30 years as part of the astronomical enterprise I only identify a few. The first of these, and the one most comparable to the current observation, occurred in February of 1987 when neutrinos from Supernova 1987A were observed. It was the only time neutrinos have been detected from an identifiable source beyond the solar system.

NASA's Hubble Space Telescope captured this image of supernova 1987A in December 2006. (Credit: NASA, ESA, P. Challis and R. Kirshner [Harvard-Smithsonian Center for Astrophysics]) The IMB proton decay experiment saw 11 neutrinos and the Kamiokande proton decay experiment saw eight. These few neutrinos allowed refined modeling of nuclear fusion in supernova explosions and they really ignited the field. I was fortunate enough attend my first academic conference in April 1987, a meeting of nuclear physicists. The schedule had been set before the neutrinos from supernova 1987A were observed but special sessions were hastily arranged in the evenings for people to talk about results and hot off the presses models. The excitement was real in a way that I haven’t seen at a conference since. It’s not so much that the LIGO detection will ignite a field; it will create the field of gravity wave astronomy. The sense of excitement is similar that surrounding 1987A. The stories touched on here – measurement of trigonometric parallax, detection of neutrinos from a supernova and observation of gravity waves from merging black holes – are landmark human achievements. Take a moment to ponder LIGO’s compressions and expansions of 4 kilometer-long interferometer arms, compressions that are thousands of times smaller than an atomic nucleus and occur in a sea of noise and motion — not at all unlike the tiny parallax shift in a star’s position in its own sea of noise and motion. But then to use that observation with all other observations to build a fairly comprehensive and self-consistent model of a vast and complex physical reality is a wonder of a completely different kind. That the LIGO team consists of more than 900 scientists is testament to the dedication humanity has for the activity of understanding what is around us.

In his 1952 Nobel Prize acceptance speech for the development of nuclear magnetic resonance Edward Purcell said “I remember, in the winter of our first experiments, just seven years ago, looking on snow with new eyes. There the snow lay around my doorstep – great heaps of protons quietly precessing in the earth’s magnetic field. To see the world for a moment as something rich and strange is the private reward of many a discovery.” When Leon Lederman was director of the Fermi National Accelerator Laboratory he said in a presentation that he liked to imagine the first hint of the next big discovery being seen by a graduate student in the middle of the night working in one of the cold, uncomfortable observation huts. To be sure, these discoveries are a well-deserved reward for the discoverers. But they are our reward to. This is a human achievement.