The origins of the Yakuts

One of the more substantive consequences of the powerful new genomic techniques has been in the area of ancient DNA extraction and analysis. The Neandertal genome story is arguably the sexiest, but closer to the present day there’ve been plenty of results which have changed the way we look at the past. The input of genetics has basically demanded a revision of the contemporary consensus of the origins of the Etruscans which emerged from archaeology. Though certainly ancestry and genetic relationship are informative, ancient DNA has also given us windows into the change of function and a record of adaptation which rests less on inference. I’m thinking here of the fact that ancient inhabitants of Central Europe 7,000 years ago do not seem to have been able to process milk in the manner which is the norm in that region today; some we know about because we know that they lacked the mutation which confers lactase persistence in Europeans. There are other examples, and I assume that in the near future we’ll still see a steep exponential increase in the generation of new results as techniques get better and cheaper. A new paper explores the demographic history of an obscure Siberian population using DNA extraction and phylogenetic analysis. The questions are historical, and relatively easy to resolve. Who are the Yakuts, where did they come from? Those of you who have played Risk know that Yakutsk is a region of Siberia, and the Yakuts are residents of that region. Interestingly the Yakuts speaking a Turkic language. Here is a map which shows the modern distribution of Turkic languages (I have shaded in what is presumed to be the Turkic Urheimat): 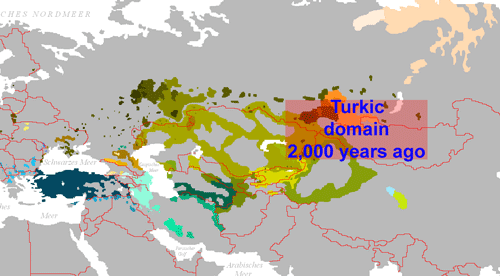 Within the last 2,000 years the Turkic languages have rapidly spread across Eurasia. Most of the expansion was to the south and west, but as you can see, some pushed their way into Siberia. These are the Yakuts. I have discussed the genetics of Anatolian Turks before. These Turks sit at one end of the domains of the language family, and how Anatolia came to be Turkic-speaking can tell us something about the dynamics of language change and ethnic reorientation more generally. The Yakuts may tell us something more. Human evolution in Siberia: from frozen bodies to ancient DNA:

Background The Yakuts contrast strikingly with other populations from Siberia due to their cattle- and horse-breeding economy as well as their Turkic language. On the basis of ethnological and linguistic criteria as well as population genetic studies, it has been assumed that they originated from South Siberian populations. However, many questions regarding the origins of this intriguing population still need to be clarified (e.g. precise origin of paternal lineages and admixture rate with indigenous populations). This study attempts to better understand the origins of the Yakuts, by performing genetic analyses on 58 mummified frozen bodies dated from the 15th to the 19th century, excavated from Yakutia (Eastern Siberia). Results High quality data were obtained for the autosomal STRs, Y-chromosomal STRs and SNPs and mtDNA due to exceptional sample preservation. A comparison with the same markers on seven museum specimens excavated 3 to 15 years ago showed significant differences in DNA quantity and quality. Direct access to ancient genetic data from these molecular markers combined with the archaeological evidence, demographical studies and comparisons with 166 contemporary individuals from the same location as the frozen bodies, helped us to clarify the microevolution of this intriguing population. Conclusion We were able to trace the origins of the male lineages to a small group of horse-riders from the Cis-Baikal area. Furthermore, mtDNA data showed that intermarriages between the first settlers with Evenks women led to the establishment of genetic characteristics during the 15th century that are still observed today.

Presumably they focused on Y and mtDNA for ease of analysis and extraction. It’s really convenient that Yakuts live in Siberia; stuff keeps, including biological remains (the paper has some photos which show corpses in a state of decomposition, but still definitely recognizable). We might never be able to do anything similar to explore the Bantu expansion because the local conditions don’t favor preservation (the same issue may explain why East Africa has been a goldmine of palaeoanthropology, while West and Central Africa has not). In any case, the ancient DNA confirm continuity between the original Yakuts and present day Yakuts, by and large. On the other hand, there is evidence for asymmetrical gene flow in regards to the sexes. It seems that the Turkic males who arrived from the south with their pastoralist culture took wives from the Evenks, a local Tungusic group. The difference is evident in two charts which visualize genetic differences across various populations. 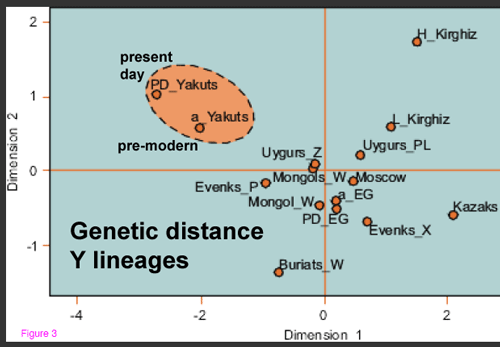 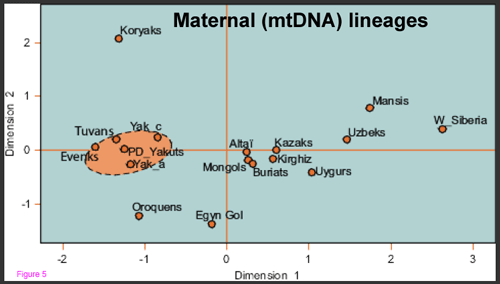 We were able to demonstrate that the Yakutian population formed before the 15th century, from a small group of settlers from the Cis-Baïkal region and a small number of women from different South Siberian origins. The genetic characteristics of the Yakuts were well established in the Central Yakutian population during the 15th century, even if there was a small loss in genetic variation during the last two centuries associated with stochastic processes or other phenomena.

Genetically the Yakuts are a hybrid population, but culturally they are Turkic. This is not a totally exceptional pattern. Ashkenazi Jews and many Latin Americans exhibit the same disjunction between genetic admixture, and relative dominance of particular cultural forms as opposed to synthesis. Part of the issue here is that biological and cultural evolution operate differently, with the latter being far more flexible and unconstrained by the inheritance modes imposed by DNA and sexual reproduction.* The Yakuts also may serve as an example of a particular mode of long distance gene flow which was possible only with the rise of horses. There are of course normal exchanges between neighboring populations, or, on occasion forcible assimilation. But with nomadism there came to be the possible of leap-frogging and transplantation of cultures and populations at great distances. The Hungarians, Hazara and Anatolian Turks are all examples of this dynamic. It also seems that while localized gene flow is more likely to be female-mediated (due to dominance of patrilocality worldwide), this long range gene flow is more likely to be male-mediated. Citation: BMC Evolutionary Biology 2010, 10:25doi:10.1186/1471-2148-10-25 * The fact that some children adopted as infants from Korea or India into American families wish to refamiliarize themselves with “their culture” does remind us that people tend connect to the two. But this is a matter of human values and psychology, not necessity due to a genuine connection (unless you believe in metagenetics).