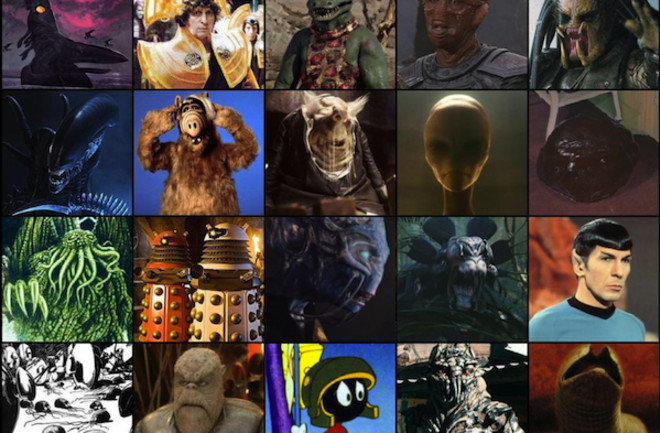 Science fiction has a problem: everyone looks the same. I know there are a few series that have aliens that look unimaginably different from human beings. But those are the exception, not the rule. Most major sci-fi series – Star Wars, Babylon 5, Mass Effect, Star Trek, Farscape, Stargate – have alien species that are hominid.

Consider the above image. Of the twenty visible species, only five are visibly not hominid. That’s right, I count the prawn, xenomorph, predator, Cthulhu and A.L.F. as being hominid. I grant that it’s a bit of a stretch. A more conservative evaluation would be that only two of the twenty are truly hominid. The others, which we’ll call pseudo-hominids, still share the following with humans: bipedal locomotion; bilateral symmetry; a morphology of head, trunk, two arms, and two legs; uprightposture; and forward-facing, stereoscopic eyes. I grant they don’t look precisely human, but the similarities are too striking to be swept into the nearest black hole.

Even the most strident supporter of parallel evolution would laugh in the face of anyone who claimed that the most intelligent species on nearly every planet in the universe just happened to evolve the exact same physiology. In series like Star Trekand Mass Effect, where interspecies relationships are possible, this cross-species compatibility is made even more preposterous. We all suspend our scientific disbelief to enjoy the story and the characters. No one believes for a second that the first species we meet in the cosmos is going to look just like us save for some pointy ears and a bowl haircut.

But what if many species in the universe do look like humans? How in Carl Sagan’s cosmos could we explain parallel evolution of that magnitude? Star Trek: The Next Generation, manages to give a scientifically plausible answer to the question of hominid and biologically compatible alien species in an episode entitled “The Chase.” Which lead me to develop the Hominid Panspermia Theory of Science Fiction Aliens.

My guess is that the writers of ST:TNG didn’t intend to plug a genre-spanning plot hole in “The Chase” given that it is, on its own, a pretty goofy episode. But, intentional or not, they gave me enough fuel to come up with a theory that would explain away a lot of sci-fi alien species similarity without resorting to a “that’s just how it is” answer. That said, I’m going to ignore the plot and jump right to the meaty conclusion. At the end of a string of clues, the crew of the Enterprise, along with a begrudging team of Klingons, Cardassians, and Romulans, activate a message from a past species. Star Trek lore is mixed as to what the nature of this species actually is, so I’m going to leverage some creative license and summarize it as I see fit. In short, an ancient hominid species sends a message to all future hominid species. That message is as follows:

The Hominid Panspermia Theory, as I call it, explains a lot. Why are most hominid species variations only cosmetic and cultural? Because their genetics are designed to prevent significant deviation from the First Intelligent Species’ mold. How can species interbreed? They share a distant ancestor the way lions and tigers do. How are there so many species at nearly the same level of technological development? Life was seeded on many planets at approximately the same time. These nagging, infuriating questions that take me out of the story can be set aside because I have a plausible scientific explanation. The Hominid Panspermia Theory also titillates my need to believe we are neither the only nor the first intelligent species in the universe.

The Hominid Panspermia Theory also helps explain how there are so many bizarre life-forms throughout the universe without invoking near-deity races like the Q. One could argue that in the time that it took the seeded planets to evolve spacefaringhominid species, many other forms of life, intelligent and otherwise, evolved as well. The result is a near-universe that is largely populated by hominid alien species and a far-universe populated by inconceivably strange alien species. Furthermore, unintentional forward-contamination from the First Intelligent Species would have allowed unguided panspermia to trigger life in unexpected and unanticipated ways. Thus, many alien first contacts with Humanity were with hominid aliens. As exploration continued outward from the seeded galaxies, stranger and more truly alien species were encountered.

I apply the Hominid Panspermia Theory theory to pretty much every sci-fi series I encounter that involves multiple alien species that are hominid. For series in which the species are distinctly hominid but not mammalian, such as Mass Effect, I just modify the theory so that the First Intelligent Species was arbitrarily dumping seed genetic code into every splash of primordial soup they could find with no intent to reproduce themselves and/or that their explorations recklessly forward-contaminated the universe. Life with a very similar genetic base still gets scattered about, but less planning leads to much less parallel evolution.

Thanks to the Hominid Panspermia Theory of Science Fiction Aliens, my neurotic need to explain the similarity among spacefaring species is sated and I can go back to enjoying the photon blasts and spaceship explosions.

Bonus Points: Can anyone name all the aliens in the picture? I only managed fourteen out of twenty.