The Olympic Torch Is Flying Through Space Right Now 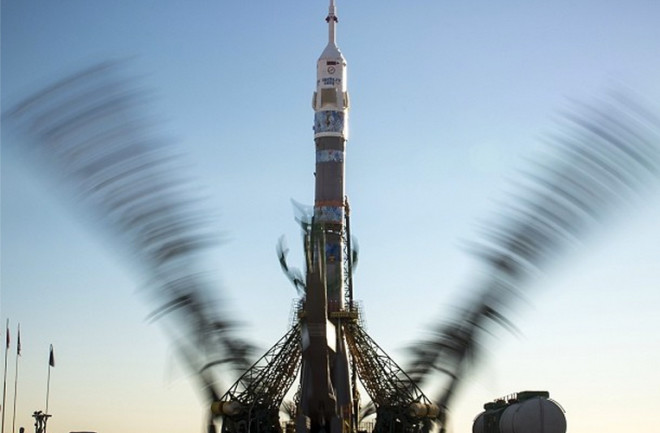 The Soyuz TMA-11M rocket, adorned with the Sochi Olympics logo, is seen in this long exposure photograph, as the service structure arms are raised into position at the launch pad in Kazakhstan. Photo Credit: NASA/Bill Ingalls

This week the Olympic torch took a slight detour from its celebratory trek across Russia---to the International Space Station. In anticipation of the XXII Winter Games in Sochi, Russia, the silver scepter took off Wednesday along with the crew of Expedition 38.

The flight to the ISS aboard the Soyuz capsule took only six hours---less than the time it takes to drive from Moscow to St. Petersburg. And to answer the question you're probably asking: No, the torch was not lit. An open flame on a spacecraft? Come on, now. That's dangerous.

Taking their turn with the torch, Expedition 38 crewmembers include, left to right, Koichi Wakata of the Japan Aerospace Exploration Agency, Mikhail Tyurin of Roscosmos, and Rick Mastracchio of NASA. Image credit: NASA/Bill Ingalls

This is the second trip to the ISS for an Olympic torch, but this time it gets to stretch its legs outside the space station. On Saturday, November 9th, two cosmonauts will take the torch on a special four-hour spacewalk. What can they possibly do with the torch for that long, you might ask? We're hoping for some Olympic-style zero-gravity ice-dancing.

The torch will come back to Earth two days later with the ISS's departing crew members---that is, assuming it doesn't get carried away with the dancing.