The Oldest Discovered Cluster of Galaxies is Revealing the Early Universe 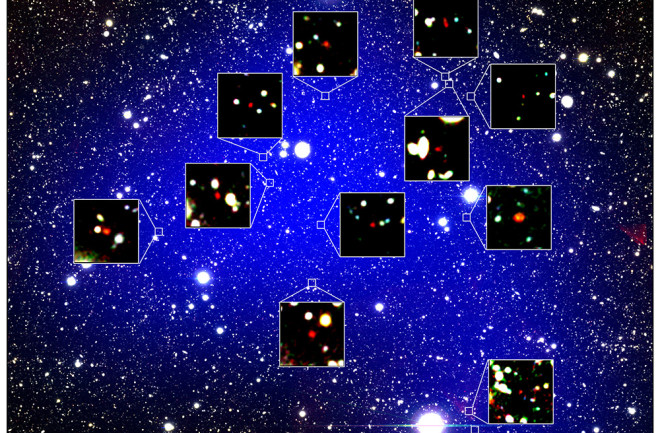 A rendering of data from the study. The blue shading shows the estimated protocluster extent and the smaller boxes show images of the galaxies they observed in the protocluster. (Credit: NAOJ/Harikane et. al.)

Galaxies and dark matter stretch throughout our universe as a vast cosmic web. They cluster together in some areas and leave empty voids in others.

But how early in the universe’s history the clusters began to form is still unknown. Now, researchers have found the most distant and earliest example of a galaxy protocluster, a group of galaxies beginning to clump together, about 13 billion light-years away, they report in a new paper in The Astrophysical Journal. The rare find may add to astronomers’ understanding of how and when today’s galaxy clusters formed and how galaxies’ surroundings affect their evolution.

“By investigating the protoclusters that are ancestors of the clusters, we can study when and how galaxy clusters form and evolve,” said the study’s lead author, Yuichi Harikane of the National Astronomical Observatory of Japan, in an email.

In an effort to understand the large structures that make up our universe, Harikane’s team peered deep into space. Because light takes time to travel from distant galaxies, studying those farther away means seeing the galaxies as they were long in the past.

Harikane’s team combined observations with multiple telescopes to create 3D maps of galaxies in two distant chunks of space. Both chunks mapped were so far from us that their light took billions of years to reach Earth. The result is a glimpse of what the galaxies looked like in the distant past.

The more distant of the two was roughly 13 billion light-years away, giving us a snapshot from when the universe was only about 800 million years old.

Each of the 3D maps showed large-scale structures, as expected. Galaxies weren’t spread evenly throughout space, and some spots had more galaxies than others. In particular, each of the chunks sported a grouping of galaxies that was more dense than the rest of the mapped space.

The team compared the denser clumps of galaxies they observed to computer simulations of dark matter aggregating over time in the universe. The dense galactic regions showed similarities to clumps in the simulations that eventually grow to be the dark matter halos of galaxy clusters that we commonly find in the present-day universe.

Studies like this of galaxy clusters and protoclusters at various ages may help astronomers figure out how galaxies’ childhood environment affects their evolution and properties. Evidence suggests that in the modern universe, galaxies in dense clusters tend to form stars less actively than those in less dense surroundings. But in earlier stages of galaxy clusters’ lives, this was not necessarily the case.

These clues also tell us about how — and when — our universe came to be the clumpy cosmic web that it is.