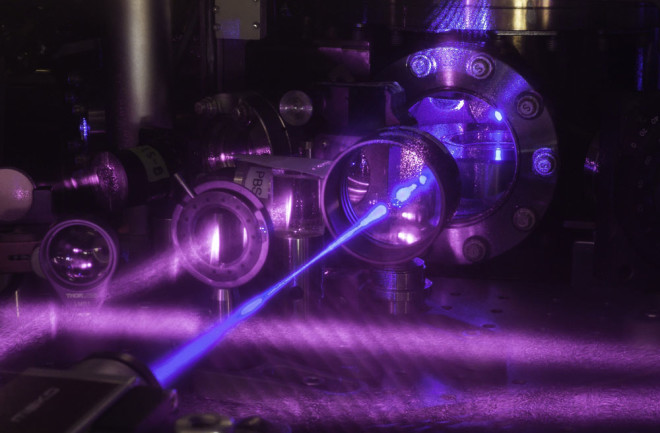 Researchers have created the world’s most accurate clock by combining strontium atoms, a “quantum gas,” and various lasers. (Credit: G.E. Marti/JILA) Time, I’m sure I don’t have to tell you, is a fundamental part of the universe. Albert Einstein showed us it was inextricably linked to the “stuff” of the universe, so the better we can understand and measure it, the better we can study everything else. So how do you study time? With better clocks! And researchers announced today they’ve come up with the best one yet.Time Enough At Last Far from the sundials and cogs of our ancestors, today’s horological devices are ridiculously cutting edge, exploiting the inherent “ticks” of atoms as they switch between quantum energy levels. There’s also lasers. Up until today, the world record holder for keeping time was held by physicists at JILA, a joint institute between the University of Colorado Boulder the National Institute of Standards and Technology (NIST). By bathing a column of strontium atoms in the super-intense light of a laser, the researchers created a clock so accurate it wouldn’t gain or lose a second over the entire age of the universe. Not bad. But today’s new clock, also from JILA, takes that to the next level — or, rather, dimension. Instead of a single column of atoms, the team demonstrated how to use a three-dimensional cube of strontium atoms to generate the clock’s super accurate ticks. The work, with the straightforward title “A Fermi degenerate three dimensional optical lattice clock,” appears in the journal Science. Time Out The new clock can reach its 1-D predecessor’s level of precision more than 20 times faster, and it’s also the most precise clock ever, with just 3.5 parts error in 10 quintillion. And this is just the beginning, a proof of concept almost — researchers should be able to build on this design, creating bigger “blocks” of atoms to improve stability and precision. It might seem like a lot of effort to improve on a clock that’s already accurate over the universe’s lifetime, but it really matters to physicists. Not only does it mean more accuracy in the super-brief (nanoseconds long) experiments possible today, but GPS and astronomical data also benefit from improved timekeeping. And more fundamentally, because time slows in stronger gravity (thanks Einstein), a super accurate clock can measure differences in altitude or even possibly reveal new insights into the mysterious “dark matter” that only interacts gravitationally. So even if an older Casio is good enough for us, rest assured that even now, scientists will keep striving for a better clock — and with it, a better view of the universe.