The New Genre Soon To Appear on iTunes: Neanderthal Music 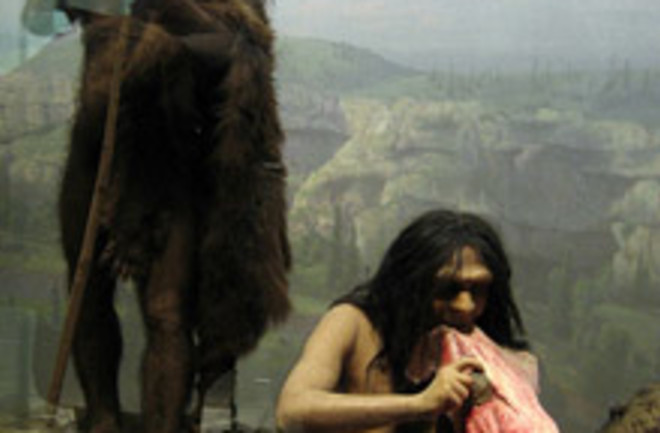 On the off chance that you've ever had a yearning to hear what Neanderthal music sounded like—assuming you've even considered whether they made music—you should absolutely click here to hear a sample of jazz composer Simon Thorne’s 75-minute-long reimagining of Neanderthal music. If you have the patience to listen to the nonsensical beginning, then you’ll get a chance to enjoy the ancient-style chanting towards the end. Thorne initially thought it would be impossible to imagine what Neanderthals listened to, but he took on the unusual project and did his best to create a song that would evoke sounds from a Neanderthal’s life. While the National Museum Wales commissioned the song to accompany an exhibit featuring Neanderthal tools and teeth, it might actually serve a bigger purpose in knocking down the misconception that Neanderthals were dumber than early Homo sapiens. Thorne told the BBC, "Every culture has language and music, so we can probably assume that [Neanderthals] had some kind of music too." Later this year, the music will be performed live when four singers with stone instruments go on tour. Can you say, "Rock on"? Related Content: 80beats: Neanderthal DNA Tests Say They Rarely Interbred With Us DISCOVER: Who Killed the Neanderthals? DISCOVER: Interview with Anthropologist Robert Martin