The Mystery of Cosmic Cold Spots Just Got Even Weirder

Recent analysis of Planck data upholds mysteries that have existed since the spacecraft’s first results in 2013. 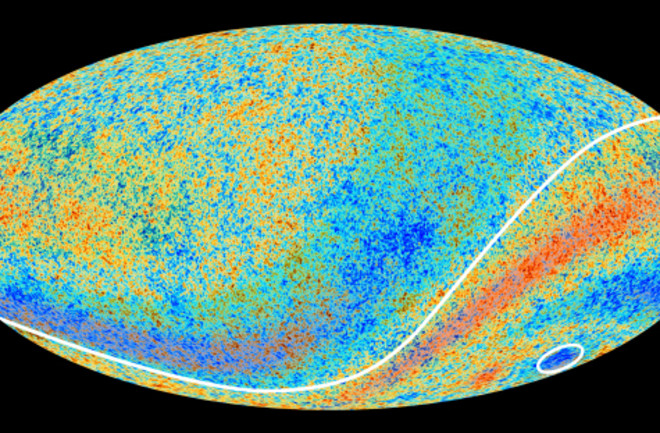 During its time in orbit, the European Space Agency’s Planck spacecraft gave humanity the most sophisticated measurements ever made of the cosmic microwave background (CMB) radiation, the first flash of light that rippled across the universe after the Big Bang. Plank told us the shape of the universe and confirmed crucial components of the Big Bang as it collected data between 2009 and 2013. It did all that by measuring the intensity of the CMB across the sky. And since then astronomers have kept putting out new maps of the cosmos as they mine data and discover new ways to tease out secrets.

While Planck’s measurements in large part confirmed physicists’ understanding of the universe, some of the most interesting things Planck discovered were the unexpected details. For one, the universe seems divided into two hemispheres, one hot and one cold. And the hot hemisphere also contains a stark cold spot. Neither of these details were predicted, and shouldn’t in fact exist, according to the so-called standard cosmological model, which otherwise well describes the universe as viewed by Planck. The third surprise is the very slight way Planck’s measurements stray from the standard model, only at large scales. While earlier spacecraft had hinted at all these issues, Planck confirmed them for scientists, bringing into high resolution a problem many researchers had hoped would instead fade away with increased precision.

Now, scientists have compared Planck’s map of those temperature anomalies – where space itself is just slightly warmer or cooler than the average of just above absolute zero – to a map of the sky’s polarization. This second map holds a record of how the light scattered across the sky just 380,000 years after the Big Bang. Researchers hoped the polarization map could answer questions about the meaning of the anomalies they’d been watching in the temperature maps by either strongly echoing them or not showing them at all. But the polarization map shows either no or faint evidence of the anomalies, leaving scientists still wondering – are the signals saying something important about the makeup of our universe? Or are they merely random fluctuations in space, signifying nothing at all?

In the temperature maps, researchers had noted suspicious anomalies that show up at large scales – some 10 times bigger than the full moon on the sky. These temperature variations don’t match with standard explanations of the universe’s physics as we know it. Scientists have also proven that the features are not due to observing quirks of their telescope. They are, however, just faint enough that these cold spots could possibly be random – while also being just strong enough that scientists can’t quite ignore them.

Their appearance hints that something about the standard cosmological model isn’t quite right.

Because the polarization map is a largely independent measurement of the sky (though taken with the same spacecraft), scientists hoped it could shed light on whether the anomalies were a true signal of something previously unknown about the universe, or simply a random fluctuation.

Unfortunately, when they compared the most advanced maps that Planck has produced, they found only faint evidence of the anomalies. That is, the spots appear, but not in a statistically significant way. Researchers from across the Planck Collaboration published their results in the journal Astronomy and Astrophysics on Thursday.

This leaves scientists stuck with two possibilities. The first is that the anomalies are simply flukes of statistics – stronger than suggested by physics, but still just random, the way coin flips don’t always turn up exactly 50/50, even after 1,000 tries.

The other possibility is some kind of new physics not currently explained by the standard model. That option is less likely now, given the polarization maps didn’t show the anomalies very clearly. But they do show faint signs of the signals, and because scientists don’t know what this new physics might be, there’s no way for them to know if it should show up in both polarization and temperature maps.

The anomalies in the cosmic microwave background have been, and remain, a thorn in the side of the standard cosmological model. The standard model encompasses the area in green, while Planck’s data appears as red points with error bars. For small scales (the right side of the graph) the two match quite well, while there is less agreement ⁠— but also more uncertainty ⁠— at large scales. (Credit: ESA/Planck Collaboration)

Planck isn’t taking new data, and scientists have probably produced the most detailed maps they can from the available information. While clever ideas might yet emerge, solving this mystery with new information will likely have to wait another decade or more, until a new generation of CMB-spying spacecraft take to the skies.