The Most Famous Ghost Town in America

Like a zombie, Bodie is in a permanent state of “arrested decay.” 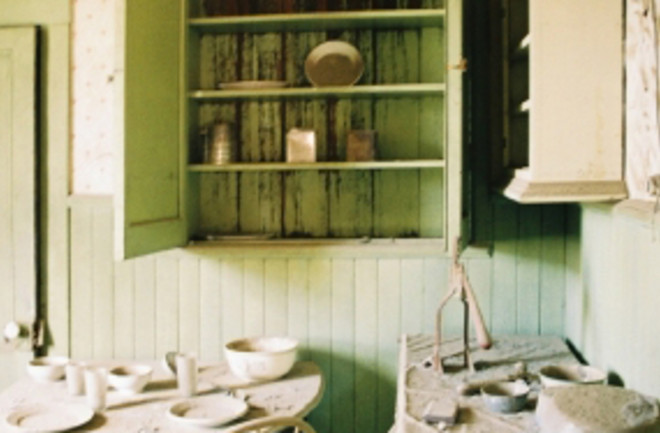 Abandoned for half a century, the mining town of Bodie, California, is now preserved in a state of "arrested decay" by the park system.

Gaze into one of the ramshackle buildings in Bodie, California, and you might see dust-covered furniture, an old muffin pan, rusty tins, and broken kerosene lamps. Or you might see a fully stocked general store with original wooden boxes and shelves with tin cans. The old gold-mining town, once bustling with saloons, brothels, gambling halls, and even opium dens, is now a ghost town, probably the most famous one in America. But it is much more than that. According to cultural geographer Dydia DeLyser of Louisiana State University, ghost towns, like the ruins of Pompeii, help people understand the past. “When people see Bodie,” DeLyser says, “it’s very powerful. They relate to the ideas the movies convey about the Old West, about the pioneering spirit of Americans, and read those into Bodie’s landscape. By looking on the tarnished remains of the past, they feel they’re experiencing that past.” Nestled in the eastern foothills of the Sierra Nevada in a sagebrush-covered valley, Bodie was not even a dot on anyone’s map until the 1870s, when gold diggers thronged the town in hopes of turning up instant wealth. Soon 30 mines were churning out gold nuggets by the bucketful, while the Standard Company mill, one of the first electrified plants in America, extracted further traces of the precious metal by chemical processing. In the first stage, workers washed ground-up ore over copper sheets clad with gold-grabbing mercury; then they scraped the gold-mercury amalgam off the boards, heated the mixture to release and condense the mercury, and poured the melted gold into molds for bars of bullion. In a second stage devised to obtain any remaining gold and silver particles, the ore, now the consistency of sand, was soaked in watered-down potassium cyanide, which drew the metals out into a form that could be trapped by trays filled with zinc shavings. By the 1940s the gold had been exhausted, the last mine closed. Today only 170 structures remain, about 20 percent of the number that stood in the 1870s, when Bodie had, some folks estimate, up to 8,000 inhabitants. When the California State Parks Department took over Bodie in 1962, it initiated a program of “arrested decay,” maintaining the dilapidated structures just as they appeared at the time of acquisition. According to Charley Spiller, a Bodie maintenance mechanic, the greatest enemies of preservation are wind, which can gust up to 100 miles an hour on nearby mountains, and snow, which averages 13 feet a year. “When the roofs fail or the windows fail, then the snow gets in and sits and soaks into the floors, and then the floors deteriorate,” he says. Currently a team of three or four workers spend six months of each year shoring up walls, repairing roofs, and replacing smashed windows—a task that can eat up as much as half a million dollars for three years’ work. Spiller and his team rebuild walls using pine similar to the native Jeffrey pine that settlers originally used. Without constant attention, most houses would disintegrate into splinters, he adds. “Some of the other towns around here that have been left alone—they’re gone. In 50 years there’d be very little left but the foundations.” While the staff works to preserve the site’s haunting, desolate look, a rich tapestry of life thrives in the remnants of the town. California ground squirrels tunnel into the shrub-covered earth, feeding on meadow grass and bitterbrush. Coyotes—and from time to time a mountain lion, bobcat, or bear—amble through the town. As people left their homes in Bodie and no one else moved in, the houses became havens for species that thrive in the void, such as deer mice, snakes, lizards, and the red-shafted flicker, a kind of woodpecker that punches holes for its nests in the buildings. Trillions of microbes live in the soil, some of which can consume the toxic mercury and cyanide by-products of mining. Last year microbial ecologist Noah Fierer, now at the University of Colorado at Boulder, sampled bacterial diversity in 98 different soils across North and South America. By analyzing variation in a specific bacterial gene in his samples—the greater the variability, the higher the variety of species—Fierer found that deserts contained up to twice as many bacterial species, roughly 10,000 per 10 square meters, as did acidic rain forest soils. The deserts of the American West, where thousands of ghost towns with names like Bodie, Tomboy, and Paria stand, are therefore paradoxically riddled with life. But it is the life that left Bodie that most interests the tourists who visit. “Ghost towns like Bodie,” DeLyser explains, “are a powerful draw because they are perceived as authentic—actual abandoned towns presented more or less as they were left, and therefore as they once were.” DeLyser has conducted ethnographic research on Bodie for 15 years and worked at the town for 10 summers. She says that visitors scrutinize the artifacts and try to determine their authenticity, asking questions like “Was all this stuff really just left here?” or “Was it all set up to make it look like a ghost town?” It would be a mistake, DeLyser says, for anyone to think, for instance, that the plates on the table or other items at Bodie were left behind in a kind of Pompeiian rush to escape. In fact, though all the artifacts are original to the town, a lot of them were arranged by staff members. (The park’s staff is now prohibited from moving items or even disturbing the dust that has built up over the years.) Bodie remains a preserved piece of the Old West, not entirely authentic but close enough to excite the imagination of everyone who has an image of the pioneer, the gold miner, or the gunslinger in his or her head. As DeLyser puts it, a ghost town like Bodie allows people to experience the past—at least “the past as they imagine it.”