There are many way to celebrate your 70th birthday. You could sit down in front of a cake packed tight with flaming candles. You could go bowling with your buds wearing a T-shirt that says, "Over the hill--and picking up speed." Or you could help put together the most amazing, three-dimensional map of the universe ever created.

Map showing all galaxies out to 300 million light years. Colors indicate distance: blue is closest, red is farthest. The long strands are the largest structures in the universe. (Credit: Courtois, Tully, et al) Brent Tully opted for door #3. Tully, a cosmologist at the University of Hawaii's Institute for Astronomy, has probably done more than any other single living scientist to help uncover what the universe looks like in three dimensions. That's no small challenge. As anyone knows from looking up a the night sky, appearances alone tell you almost nothing about which stars are near and which are far. The same goes for galaxies. Measuring their distances is so difficult that less than a century many astronomers doubted that other galaxies even existed. At the time, some of the leading researchers thought that what we now call galaxies were actually "spiral nebulae"--small, nearby clouds of gas that were turning into individual stars. That is the kind of challenge that Tully has taken on, with staggering results. It is no exaggeration to say that almost everything we know about the universe today has grown out of the effort to see past the flat, 2-D appearance of the sky and discern the true depths behind it. Mapping the third dimension allowed Edwin Hubble to prove the reality of other galaxies and then to discover that the universe is expanding. In the 1930s, Fritz Zwicky used mapping to uncover the first evidence of dark matter. In the 1990s, two groups engaged in a much more elaborate type of large-scale mapping were startled to realize that the Big Bang is accelerating, apparently under the influence of dark energy. What Tully has done is less dramatic but no less important. He has mapped the universe in detail out to a distance of about 100 million light years. To put that in more human terms: Columbus's maps of the New World described a land 3,000 miles from home, but Tully's map extends 6,000,000,000,000,000,000 miles out. No wonder he is often referred to as a cosmic cartographer. By filling in the details, Tully has made it possible to discern the true structure of the universe: clusters of galaxies arranged into enormous filaments, bound together by invisible strands of dark matter, and tremendous lonely voids where galaxies are sparse. 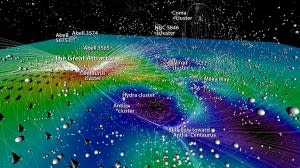 Currents of galaxies (white spheres) are drawn by gravity toward galaxy cluster and even more massive cosmic pileups like the "Great Attractor." Red and yellow show zones of attraction; dark blue shows the voids that galaxies flow away from. (Credit: Courtois, Tully, et al.) For Tully's 70th birthday, a group of his friends and collaborators teamed up to throw a conference celebrating his work. At the same time, they unveiled two remarkable new cosmic maps, which he helped to create. One is the color coded one, above, which depicts the exact location of every galaxy out to a distance of 300 million light years; that covers about 30 times as much space as Tully's earlier version. But the even more amazing advance--the one that truly made my head spin, as I hope it will do to yours--is the 3D video, which shows not only all the visible structures but also the unseen dark matter, and illustrates the dynamic behavior of the whole thing. (The French-accented narration, decidedly not by Tully, is a sweet extra touch.) This is the structure and evolution of the cosmos laid bare, covering distances and times and velocities that are, in a fundamental way, beyond human comprehension. And yet they are not truly beyond the reach of the intellect, because Tully has brought it all into view, with a little help from his friends. Give him 17 minutes and he will give you the universe. Happy birthday to you, and to all of us. Follow me on Twitter: @coreyspowell

Cosmography of the Local Universe (FullHD version) from Daniel Pomarède on Vimeo.