The Moon is Finally Getting the Attention It Deserves 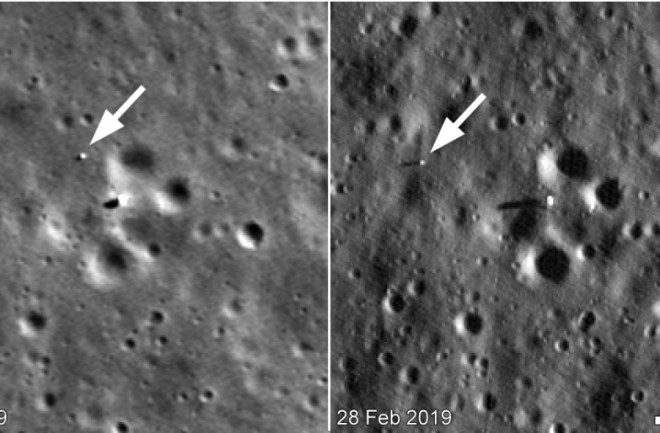 China's Chang'e-4 lander and its little rover, Yutu-2, were observed by NASA's Lunar Reconnaissance Orbiter in February. Note the movement of Yutu-2 between the frames — the first surface exploration on the far side of the Moon. (Credit: NASA/GSFC/Arizona State University)

We've reached another "will they or won't they?" cliffhanger in the long-running soap opera, When Will Humans Return to the Moon?

Last May, NASA administrator Jim Bridenstine promised that a crew would be landing there by 2028. "To many, this may sound similar to our previous attempts to get to the Moon," he admitted. "However, times have changed. This will not be Lucy and the football again."

A month ago, Vice President Pence added a big plot twist, now declaring that "it is the stated policy of this administration and the United States of America to return American astronauts to the Moon within the next five years." A return to the Moon by 2024? Despite the bold rhetoric, it's a weak "maybe" at best.

Unofficial sources estimate that fulfilling Pence's goal will cost around $40 billion over the next five years — which is to say, twice as much as the entire annual NASA budget. Congress would have to approve that spending, and so far there's no obvious political support for it. But even if human exploration gets kicked into the future yet again, robotic exploration of the Moon is definitely taking off — and this is where the drama gets real, and really interesting.

Although NASA has not had a presence on the surface of the Moon since the 1970s, it has had a hugely successful decade-long presence around the Moon with the Lunar Reconnaissance Orbiter (LRO). China has been busy on the Moon: Chang'e-3, its first lunar lander, touched down in 2013, and Chang'e-4 is currently conducting the first surface explorations of the lunar farside. Beresheet, created by the Israeli nonprofit SpaceIL, almost became the first private mission to the Moon three weeks ago.

It was derailed by a software command error that occurred when it was just 14 kilometers from touchdown. There's a lot more to come on the robotic side of the story. The SpaceIL team has already begun work on Beresheet 2, building on the lessons learned from their near-success. India is working on Chandrayaan-2, a lander and rover scheduled for launch in July. China has at least four more Chang'e lunar landings in the works, including sample return missions, aiming to build a robust robotic lunar infrastructure before sending astronauts (or rather, taikonauts) sometime in the 2030s. Russia and the European Space Agency have their own concepts in development, though with uncertain funding.

NASA will soon be joining the robot Moon parade — much sooner than it will be sending astronauts even under the most optimistic assumptions. Last fall, the agency announced that it is allocating up to $2.6 billion for private companies to deliver payloads to the Moon over the next decade, with nine companies eligible to bid for the contracts. In essence, NASA is putting up the money to finance private lunar taxi services. It's worth noting that, of the nine companies, only two (Draper and Lockheed Martin) are part of the aerospace old guard. The first of these public-private NASA missions should launch by 2020, possibly even by the end of 2019.

The great hope (among would-be space entrepreneurs as well as among lovers of space exploration in general) is that the private sector will help expand opportunities by reducing costs. Step one, which is well underway, is developing cheaper rockets and spacecraft. Step two is developing technologies to make use of local resources on the Moon: "in-situ resource utilization" or ISRU in industry lingo. ISRU could mean mining ice from the lunar soil to make rocket propellant; it could also mean building habitats and accumulating supplies of water and oxygen for the magical moment when astronauts return. A run of successful robotic missions could be the critical element that finally allows those human missions to happen. China is explicitly betting on that strategy, and now NASA is implicitly betting on it, too.

Along with driving down the cost of human space exploration, robotic missions should clarify the value of returning to the Moon. I won't get into the fundamental question of whether we should be spending money on space exploration at all (I've addressed that many other places, such as here.)

If you believe, as I do, that space exploration is well worth the modest amount our society spends on it, then the relevant question becomes whether we have important things to learn by going back to the Moon. In this case, the answer is extremely simple: Yes, we do. The Moon deserves our attention, and deserves far more attention than it has received over the past few decades.

A flood of recent discoveries make that abundantly clear. NASA's LRO has shown that the Moon is full of fascinating, complex geology. It has deposits of ice (probably well mixed with lunar dust) in permanently shadowed craters near its poles. It shows signs of surprisingly recent volcanic activity. Small impacts are recycling the lunar surface significantly more quickly than researchers expected. LRO's camera has captured the formation of more than 200 new craters on the Moon. We now know that many of these impacts produce flashes that are easily visible from Earth, like the one that appeared during the January, 2019 lunar eclipse.

The phases of the far side of the Moon were reconstructed from observations by NASA's LRO satellite. Such a view is impossible from Earth; we are the first species ever to see it. (Credit: NASA's Scientific Visualization Studio)
A brand-new, 12-meter-wide crater that formed on the Moon in late 2012 or early 2013. LRO has observed more than 200 such fresh impacts, providing a direct measure of the local asteroid threat. (Credit: NASA/GSFC/ASU)

The record of ancient craters on the Moon also indicates that the rate of large impacts increased starting around 290 million years ago, possibly due to a collision in the asteroid belt. The course of evolution on Earth, from the rise of the dinosaurs until now, has been shaped by such impacts; on the Moon, we can see the full record, unobscured. Impacts also shuttle material between Earth and the Moon, meaning that much of Earth's early history might still be preserved there. (See my recent post.)

Taking a broader view, it's damn strange that we have paid so little attention to the planet-size world sitting right in front of us in space, at less than 1/100th the distance to Mars. Moon and Earth formed together; its history is our history, and yet the details of that story are still mostly locked away, unread, on the lunar surface.

A more thorough inventory of Moon rocks would also answer many broader questions about the formation of the solar system; it could test the "Grand Tack" theory that Jupiter migrated toward and then away from the Sun, and that at least one giant planet was kicked out of the solar system during its early, chaotic stage. If we ever are to become a spacefaring species, learning to live and to explore far from Earth, it is only natural that we will begin on the world that is closest to us.