The Mismeasure of Stephen Jay Gould

Looking deeper into Stephen Jay Gould's claims has revealed he was guilty of the same sins he decried in others. 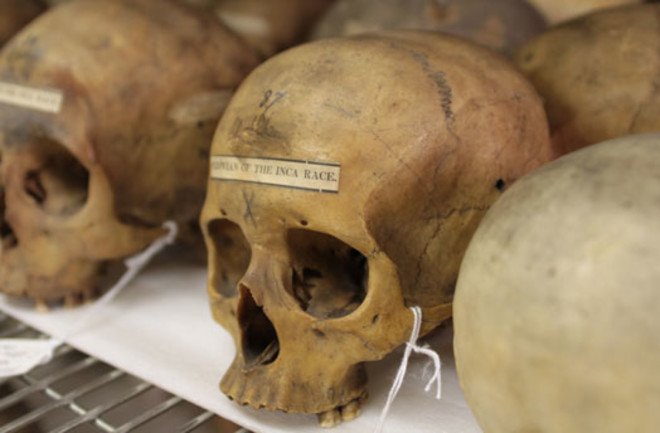 "No scientific falsehood is more difficult to expunge than textbook dogma endlessly repeated in tabular epitome without the original data.” With those fateful words, published in Science in 1978 [PDF], the paleontologist and historian of science Stephen Jay Gould launched a famous assault on Samuel Morton, a 19th-century physical anthropologist. Morton’s measurements of skull size had been used to justify the claim that Caucasians have larger skulls and are therefore more intelligent than other races, an inference discredited by modern science. Gould accused Morton of mismeasuring craniums, botching his math, and selectively excluding or weighting evidence. In every case, Gould said, Morton’s errors had favored his bias, boosting whites or cheating blacks. But this year, a team of scientists turned the tables on Gould, showing that the true errors and bias on display were his own.

Gould’s attack on Morton—which he expanded into a broad critique of racist anthropology in his 1981 book, The Mismeasure of Man—itself became dogma, widely read and assigned to students as an incisive study of scientific bias. Several years after its publication, John Michael, an undergraduate at Macalester College in St. Paul, Minnesota, remeasured some of the skulls in Morton’s collection, checked some of his calculations, and reported in Current Anthropology that Morton had actually been largely accurate in both respects. In 1996 Gould revisedThe Mismeasure of Man. He didn’t acknowledge Michael’s paper, but in a footnote he conceded that he had underreported the average Caucasian skull size in Morton’s collection.

“The reason for this error is embarrassing, but instructive, for it illustrates, at my expense, the cardinal principle of this book,” Gould wrote. “I was working from a Xerox of Morton’s original chart, and his correct value of 89 [cubic inches] is smudged to look like an 80 on my copy.” Gould noted that the range of cranial volumes in the relevant subset, which made an average of 80 impossible, was “clearly indicated right alongside” the smudged number, but “I never saw the inconsistency—presumably because a low value of 80 fit my hopes for a depressed Caucasian mean. The 80 therefore ‘felt’ right and I never checked it.”

Despite this confession, Gould stood by his criticism of Morton, and students continued to treat The Mismeasure of Man as received wisdom. But shortly before Gould’s death in 2002, Jason Lewis, a University of Pennsylvania freshman, and Marc Meyer, a Penn graduate student, took a fresh look at Morton’s skulls. “We started measuring the skulls for a class project to see if we could relate cranial morphology to climate and environmental variables,” Lewis says. “We were not interested in intelligence or race or ranking at all.”

Lewis spent four years measuring the skulls and writing his thesis on climate factors. Only then, while juggling graduate studies and fieldwork, did he begin to examine Morton’s original documents and compare Gould’s analysis to the documents and his new data. What he found turned the whole story upside down. The smudged number was just the beginning. All the data relevant to Morton’s alleged bias—his measurements and calculations—contradicted Gould’s claim. Morton’s errors didn’t show a pattern of bias; Gould’s did.

Lewis’s analysis, reported with meyer and four other colleagues last June in PLoS Biology, showed that Morton’s measurement errors were marginal and random among populations, except for Egyptian skulls, which he tended to overestimate, thereby inflating what he called the “Negro” average. Among the 308 craniums Lewis and his collaborators remeasured, the three types that Morton had most overestimated were Egyptian, Seminole, and “Native African Negro.” In other words, his errors were contrary to his alleged bias.

On the other hand, Lewis and his colleagues found several anomalies in Gould’s analysis. In addition to his erroneous figure for mean Caucasian cranial size, he had miscalculated the average cranial size of two Native American tribes and had excluded another tribe when computing the overall Native American average. He had omitted, without any stated justification, all skulls from tribes with fewer than four representatives in the sample, but he had not applied the same rule to non–Native American groups. He had also excluded—again, without stated justification—all Native American skulls that Morton had previously measured with a different technique, even though Morton scrapped that technique and remeasured the skulls so that all of them were eventually measured the same way. Again, Gould didn’t apply this rule to non–Native American skulls. All of Gould’s errors and unexplained methodological quirks narrowed the racial gaps.

Perhaps the most damning thing the authors found was Gould’s copy of Morton’s book on the skulls. Gould, noting that Morton had overreported average Native American cranial size in one table, had speculated that Morton did so because it “demoted blacks” and thereby “provided so much satisfaction that Morton never thought of checking himself.” But the error, which was plainly typographical since Morton accurately reported the figure on the previous page, had been corrected in very old ink in several copies of the book, including Gould’s. Morton had corrected himself. Gould had ignored the correction.

Richard Milner, Gould’s longtime editor at Natural History magazine, says any errors Gould made were inadvertent. “Whatever conclusions he reached, rightly or wrongly, he did with complete conviction and integrity,” Milner says. “He was a tireless combatant against racism in any form, and if he was guilty of the kind of unconscious bias in science that he warned against, at least his bias was on the side of the angels.”

That answer worries Lewis, who now teaches at Rutgers University. “Our job is to follow the scientific method, protect our results from bias, and report results,” he argues. “We can’t slander scientists or the scientific process because we are worried the results will be abused.” And as Gould’s errors show, believing you are on the side of the angels makes it difficult to recognize your own preconceptions.

Science cannot prevent bias, but it can correct it. Gould understood this. In his essay on Morton, he urged scientists to scrutinize one another’s work and “cultivate, as Morton did, the habit of presenting candidly all our information and procedure, so that others can assess what we, in our blindness, cannot.” That excellent advice has now been applied to the blinded scholar who gave it.