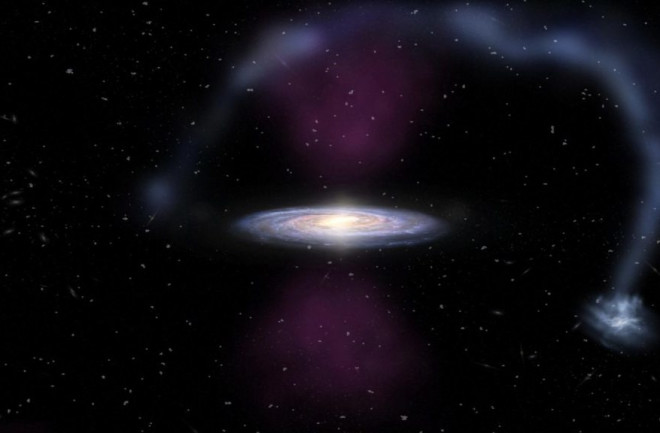 A flare erupted from the Milky Way’s center some 3.5 million years ago. While Earth wouldn’t be in any danger if it happened today, the light would be clearly visible. (Credit: James Josephides/ASTRO 3D)

Astronomers believe supermassive black holes probably lurk in the centers of most large galaxies. These gargantuan black holes can gather swirling disks of material around them as their gravity attracts stars and gases. In some cases, these disks can emit vast amounts of light and even shoot huge jets of matter into space. The center of such an eventful galaxy is called an active galactic nucleus, or AGN.

Our own Milky Way seems to have a relatively calm center, but astronomers suspect this wasn’t always the case.

Some clues suggest that a flare of energetic radiation burst from our galaxy’s center within the last few million years. In a new study, a team of researchers now describe another piece of evidence that the Milky Way burped out such a flare, with the research also pointing to the supermassive black hole in our galaxy’s center, called Sagittarius A*, or Sgr A*, as being responsible.

The team estimated this event occurred about 3.5 million years ago, give or take a million years. That would mean the Milky Way’s center transitioned from an active to a quiet phase pretty recently in Earth’s history, possibly when early human ancestors were roaming the planet.

The flare would have been visible to the naked eye, shining about 10 times fainter than the full moon across a broad spectrum of light wavelengths.

“It would look like the cone of light from a movie projector as it passes through a smoky theater,” University of Sydney astrophysicist and lead study author Jonathan Bland-Hawthorn said in an email.

The researchers describe their findings in an upcoming paper in The Astrophysical Journal.

Clues to the Milky Way’s active history include giant bubbles of gas ballooning out from the disk of the galaxy. The bubbles, which emit high-energy X-ray and gamma-ray radiation, could have formed when jets of matter shot out from the galaxy’s center.

The new piece of evidence comes from examining a stream of gas that arcs around the Milky Way. This stream is like a trail that two dwarf galaxies, called the Large and Small Magellanic Clouds, leave as they orbit the Milky Way. The research team studied ultraviolet light coming from this gas trail, called the Magellanic Stream.

“I think AGN flickering is what goes on for all of cosmic time,” Bland-Hawthorn said via email. “All galaxies are doing this” — like volcanoes that can lie quietly for long stretches of time but suddenly erupt.

Learning more about the central black hole of our galaxy is an exciting area of research, he added.

“I think Sgr A* is the future of astrophysics, like searching for life signatures around planets,” Bland-Hawthorn said. “I am excited by what we will learn over the next 50 years.”