The Milky Way's Stars Travel Far and Wide from their Birthplaces 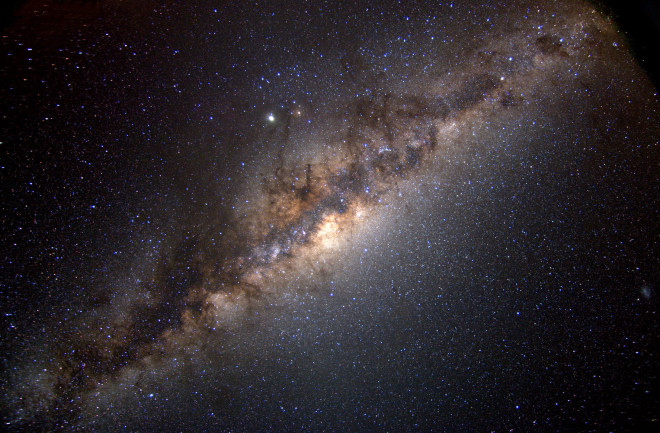 Mapping our galaxy’s formation and evolution would be pretty easy if stars just stayed in their birthplaces, but unfortunately that’s not the case. The Milky Way’s vast pool of stars is constantly expanding outward, getting knocked out of their orbits, and generally evolving alongside our galaxy. Sure, this makes for an exciting stellar journey, but these gradual movements make it difficult to pinpoint a star’s origins and track our galactic history.

However, a team of researchers has found a way to peer into a star’s past and identify where in the galaxy it was born. By figuring out the ages and chemical abundances of our stellar population, researchers would be able to piece together the Milky Way’s past and possibly predict its future.

A star’s movement throughout its lifetime, known as radial migration, depends on a lot of different factors. In a spiral galaxy like our own, it’s thought that stars are pushed outward when they interact with the strong gravitational forces of the arms and galactic bar, and can be completely knocked out of orbit when smaller galaxies invade our borders.

But luckily, we’ve found a way to sort through this stellar turbulence. Due to the different elements strewn about our galaxy, a star born in a certain place at a certain time will have a chemical makeup that reflects the environment it formed in. So if we’re able to get a good look at a star and measure the relative abundances of materials within, we can trace it back to its birthplace and track its migration.

To get an in-depth look at a sample of stars, the research team borrowed data from ESO’s 3.6 m telescope at Chile’s La Silla Observatory. They analyzed roughly 600 stars that had been probed with HARP, the telescope’s high-powered spectrograph, and were able to estimate the stars’ ages and abundances of iron — an element leftover from supernovas that’s absorbed during star formation.

Their findings, published in the Monthly Notices of the Royal Astronomical Society, showed that the stars, all of which sit close to the Sun today, were born far and wide across the galactic disc — traveling significant distances from their homelands.

The left side of the images shows the condensed location of the sample of stars. The right side shows where in the galaxy the stars were born. (Credit: I. Minchev (AIP))

The left side of the images shows the condensed location of the sample of stars. The right side shows where in the galaxy the stars were born. (Credit: I. Minchev (AIP))

Their simulations show that older stars in the sample were born closer to the galaxy’s center, and that younger stars were born further out in the disc — lining up with the theory that star formation gradually extends outward as a galaxy ages. Based on their estimates, our Sun itself has taken quite the galactic road trip, receding about 2,000 light-years during its 4.6 billion year lifetime.

“In the near future, applying this method to the extremely high-quality data from the Gaia mission and ground-based spectroscopic surveys will allow much more exact measurements of the migration history and, thus, the Milky Way past,” said the study’s co-author, Friedrich Anders of the Leibniz Institute for Astrophysics Potsdam, in a press release.

And by tracking how our stellar population has evolved so far, we could also get a good idea of where we’re heading, and what our galaxy might look like in another 13.5 billion years.