Last night was the premier of the TV "The Mentalist", what promised to be a skeptical look at psychics and police work. Quick summary: it rocked. More thorough summary: 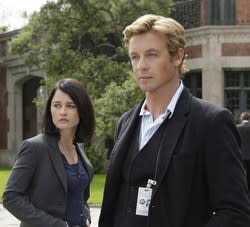 Well, it did rock. It's a crime/detective drama, but also has lots of humor. Simon Baker, dreamy Aussie, plays Patrick Jane, a man who used to be a relatively famous stage psychic, and is now a police detective. He has an incredible gift of observation, able to watch people's behaviors, notice small background items, note things that are said, and put them together rapidly to form a picture of what's happening around him. "The Mentalist" is a different kind of crime drama. Baker is very engaging (especially, evidently, for my wife), and he does have a quality about him that makes him fun to watch. His character invokes sympathy right away, even if he is a bit of a pain in the butt. He's confident, even a little arrogant, but funny and endearing. It's hard not to compare him to the titular character from "House", though he's not as grumpy. I love love love his character. He hates so-called "psychics" -- hates them. In one scene, he comes right out and says there are no such things as psychics! When he did that, Mrs BA, The Little Astronomer, and I all threw our arms over our heads, fists pumping the air! W00t! But to the meat of this: I think a real skeptic is behind this show, someone who knows about the frauds, fakes, and evil people who claim to speak to the dead. Here's why: S P O I L E R S B E L O W In a series of flashbacks, we see Patrick Jane as he was five years before, a stage psychic who uses all the fraudulent tricks to make people think he can speak to the dead. On a TV show, he also brags that he's helping the police find a serial killer nicknamed Red John (most psychics make claims like these, but you will never, ever find a case that was solved by a psychic, or even aided by one). Jane brags about his abilities, and insults the serial killer, calling him ugly and small.

When Jane comes home that night, there is a note on his bedroom door... from Red John. The killer wasn't happy about being insulted in the media by Jane, and so has exacted his revenge. The note says that when Jane opens the door to the bedroom, he'll find his wife and daughter, dead. In an unusual demonstration of restraint by a TV show, the scene ends showing him opening the door, and we don't see the bodies. Just a lurid smiley face on the wall, drawn in blood, Red John's signature. Obviously, this is when Jane dropped the psychic act and became a vigilante against psychics. It's also where he joins the police force. During the show, Jane talks to a psychiatrist because he can't sleep well at night. When asked why not, he makes up a story about a childhood tragedy. We, the viewers, know the real reason: guilt over the death of his family. His own hubris killed them. Now let me make an aside. The real tragedy of these blood-sucking "psychics" who "talk to the dead" is that they interrupt the grieving process. If you lose someone you love, it's awful, terrible, and the pain is tremendous. But, over time, you heal. It takes a long time, and of course you never totally get over it, but eventually you can heal, you can move on. "Psychics" stop this process cold. By making people believe that their loved ones are still around, still issuing pablum-like things ("I'm happy", "I forgive you"), they don't let the grieving people heal. They are picking at the wound, keeping it open. Sure, people may feel better in the short term, but the healing process is short-circuited, and that's very unhealthy. And it's another in a long list of reasons why people who claim to talk to the dead are so truly evil. And that brings us to the last scene in "The Mentalist". At the end, after solving the case using his amazing observational skills, Jane goes home. We see it's the same house he lived in when his wife and daughter were killed five years earlier... but it's totally empty. All the furniture, all the furnishings are gone. Jane slowly goes up the stairs and into the bedroom. Like the rest of the house, it's stripped clean. The only thing in it is a bare mattress on the floor. Jane lies down on it, and the camera pans around, showing the bloody smiley face still on the wall. I was astonished by this. The character of Patrick Jane feels tremendous guilt -- as well he should -- over the death of his family. Because of this, he punishes himself by staying in the same house, removing all the trappings of a happy life, and by leaving Red John's mark on the wall. But remember, he couldn't tell the doctor why he wasn't sleeping. He couldn't admit to being partly responsible for his family's death. He was a psychic, and he interrupted his own grieving process. Beautiful. The writing here was intelligent, thoughtful, and because of this irony based on skeptical knowledge of "psychics", right on the mark. And, in my opinion -- as you might guess -- nailed how truly loathsome "psychics" are. This was one of the most skeptical shows I have ever seen on mainstream TV, and I hope they can keep this up. It showed so many tricks, so many insights into how to defraud people that I would LOVE it if more people watched and absorbed this knowledge. My only fear is that, under pressure from TV suits, they somehow let Jane get over his guilt and forgive the "psychics" -- after all, his skepticism is in some ways due to his major character flaw, so it's not a big jump for the writers to do that. So many shows cop out that way; make the skeptics look like jerks, and make the antiscience followers look sympathetic, when in fact that is far, far from the truth. So many "psychics" are the ones who use people, defraud people, and use their emotional vampirism to get rich, rich, rich. So I can't say enough good things about "The Mentalist". It was well acted, well written, and the staging and direction were very good. Overall it was engaging, funny, and drew me right in. But I think the most important part is that it spoke from a true skeptical standpoint. Jane gave many of the arguments I hear from other skeptics about many antiscience topics, and they come from the star of a mainstream show. And to see a skeptic who is portrayed as sympathetic, attractive, and even likable was a breath of fresh air from a medium -- heh, medium -- that falls all over itself to give the phonies, the frauds, and the fakes far more than their fair share. I hope "The Mentalist" has a long, skeptical, and critically acclaimed run. 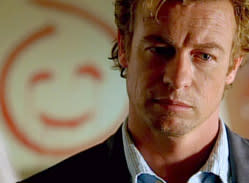