The Meaning of Colors

What colors and color vocabulary can tell us about the evolving needs of language. 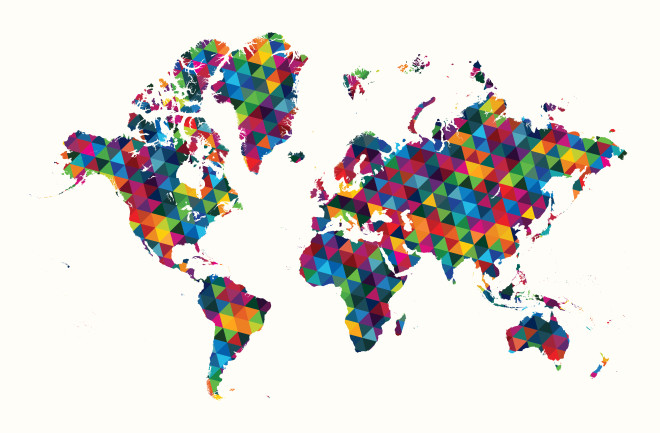 When Luisa Maffi was a graduate student at the University of California, Berkeley in the late 1980s and early 1990s, she helped redefine what we talk about when we talk about color. Together with her advisors Brent Berlin and Paul Kay, she analyzed how people around the world name and categorize colors. The team reached a striking conclusion: Despite the obvious differences in sounds, words and syntax, the world’s languages tend to carve up the vast color spectrum into universal categories. Even languages with just a handful of color terms normally contain words that refer to black, white and red, while those with larger color vocabularies divide the rainbow into fairly predictable terms.

These seminal findings expanded previous work by Berlin, Kay, and others, and were later compiled into a monograph called the World Color Survey (WCS). This “universalist” framework stood in stark contrast to reigning “relativist” theories that color words are uniquely shaped by cultural context. Decades later, researchers equipped with new computational tools continue to draw from the WCS to answer some of the same fundamental questions posed by Berlin, Kay, Maffi and their colleagues: What explains the shared patterns in how languages compress the vast color spectrum? What drives the subtle differences — and is there a way to predict that variability?

A growing school of thought suggests these similarities and differences are due to variations in communicative need across cultures. In other words, why and how often people talk about certain colors could indicate something about that color’s usefulness. Red, for example, has universal utility, as it’s the color of blood, many staple foods, and other important objects.

In an effort to systematically quantify this communicative need, researchers from the University of Pennsylvania devised an algorithm, which used data from the WCS to infer how frequently 330 colors were referenced across 130 different languages. The more often people talk about a color, the scientists reasoned, the higher its communicative need. Their algorithm could also predict how each language would assign names to the 330 colors with unprecedented accuracy.

Initially, says co-corresponding author and evolutionary biologist Joshua Plotkin, “if you had asked me, ‘What are the colors that you want to speak about most?’ I would not have been able to answer that question.” After all, communicative need seems like an intractable concept. But, with the help of computational ecologist and postdoc Colin Twomey, Plotkin’s team was able to do the math.

Twomey and Plotkin revealed that languages contain a “hidden diversity” of communicative needs that shape the way linguistic communities map colors to words. These needs appeared to correlate with geographic location and local ecology. However, a more universal trend also emerged: bright reds and yellows were in particularly high demand around the world.

Twomey hopes their work will help expose some of the factors that sculpt dialects over time. “Understanding the constraints that shape language is important for understanding the past, present and future of language change,” he says. The next step is defining a catalogue of language-specific needs that drive this evolution.

A Continuum of Color Needs

Theories regarding when and why languages evolve color terms have been percolating for centuries. One idea dating back to the 1800s suggests that languages acquire color terms in roughly the same order over time. According to Berlin and Kay, black and white usually come first, followed by red, then green and yellow, then blue, and finally, in no particular order, brown, purple, pink, orange, and gray. In both the Iliad and Odyssey, Homer famously describes the sea as “wine-dark” rather than “blue,” perhaps because the vernacular of his day lacked the precise terms to do so.

This color chronology, rather than being genetically “hardwired,” is likely driven by how often communities need to talk about certain colors, says neuroscientist and visual artist Bevil Conway. Similarly to Plotkin and Twomey, Conway and his colleagues have found that people around the world communicate most efficiently about warm hues. Conway and his colleagues argue this is because the parts of the visual world we care about — the things we label as “objects” — are more likely to be warm colors than cool colors.

Blues and purples, for instance, which reside towards the cooler end of the spectrum, rarely occur in nature as stable pigments. That’s why they were traditionally considered “royal” colors. They only became widely accessible once people found ways to produce them artificially, Conway says, which could explain historically why it took languages longer to incorporate names for them. Once linguistic communities value a particular region of color space, they tend to carve it into more precise terms. (For example, today in English the broad category “purple” can be broken into lavender, violet, and so on.)

Conway’s lab at the National Eye Institute is particularly interested in the effects that industrialization has had on the evolution of color vocabularies. Conway and his collaborator Edward Gibson found that Tsimane' hunter-gatherers from the Amazon are more likely to use color to describe artificial objects than natural ones. The Tsimane' already have such precise names for the facets of nature that are most salient in their everyday lives that they have little need to further define these items by color. (For example, one population has over 1,000 terms for different plants.)

As Conway puts it: “Industrialization is one of the most radical ways in which we have changed our visual diet.” The ability to manufacture items in whatever shade we want, he adds, has allowed us to pick and choose which colors we surround ourselves with.

So what might the future of color language evolution look like? Given that humans can distinguish between more than a million different colors, it’s tempting to imagine that languages could continue to accumulate color terms as new technologies allow us to engineer our own prism of experiences.

However, according to color vision experts and married couple, Delwin Lindsey and Angela Brown, there’s a limit to our cognitive load — the brain space we can feasibly allocate to storing color words. Languages such as English that have racked up a relatively large number of color categories usually max out around 15 to 20. Having more than that doesn’t really improve communication, Lindsey and Brown say, because oftentimes speakers don’t agree on the precise definitions of more obscure colors like, say, coral and chartreuse.

Some languages have come up with creative solutions to get around these cognitive limitations. Back in 2015, Lindsey and Brown found that nomadic Hadza hunter-gatherers from Tanzania actually “crowdsource” to create a collective color vocabulary. One person may only know a handful of color terms — and sometimes disagree with others about which colors those words describe — but together the community uses most of the color categories also found in English and other languages.

This example and others like it suggest that the evolution of color lexicon will likely be shaped by both local needs and global forces. Maffi observes this on a daily basis in her current role as the director of a non-profit called Terralingua, which advocates for biocultural diversity. Although it may sound counterintuitive, she says spotting the shared linguistic patterns in the WCS was her first exposure to linguistic and cultural diversity.

She spends much of her time considering the anthropological variation that stems from distinct historical circumstances, locations, societal norms, local environments, and more. “But with all that, we still share a common humanity,” she explains. “And, among other places, it shows up in the features that our languages share in spite of all their differences.”