The Mathematics of Terrorism 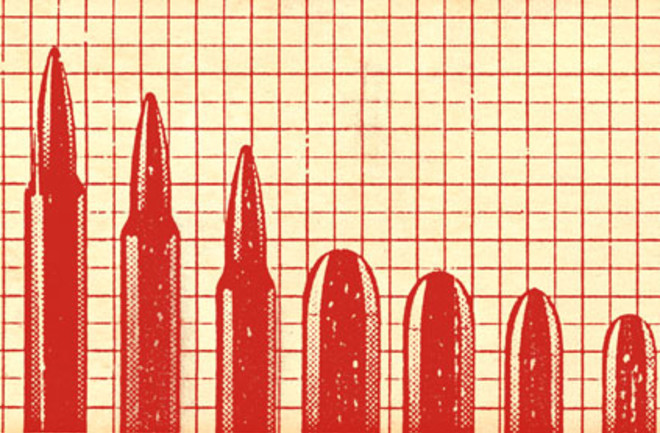 Since the 1960s, the mountains of southern Colombia have been home to a war between the government and a leftist guerrilla movement known as the Revolutionary Armed Forces of Colombia, or FARC. The conflict has simmered for decades. Sometimes it flares up in battles with government forces, a terror bombing, or a particularly high-profile kidnapping. Sometimes it fades into the background as cease-fires or negotiations quiet the hostilities. FARC has been fighting for so long that the war has become almost like background noise, says Neil Johnson, a University of Miami physicist who travels to Colombia every year to visit his wife’s family. Even locals have become numb to the conflict. “There’s this war going on, but I didn’t think too much of it. You hear numbers of dead every day, like football results,” Johnson says. “It took me 10 years to realize that maybe there was important information hidden in those numbers.”

Johnson, who specializes in the study of complexity, is one of a new breed of physicists turning their analytical acumen away from subatomic particles and toward a bewildering array of more immediate human problems, from traffic management to urban planning. It turns out that subatomic particles and people are not that different, he explains. “The properties of individual electrons have been known for many years, but when they get together as a group they do bizarre things”—much like stock traders, who have more in common with quarks and gluons than you might think. So profound is the connection that quants (quantitative analysts, often with backgrounds in physics or engineering) have flocked to Wall Street, creating elaborate models based on the way markets have moved in the past. ArXiv, a clearinghouse for physics research papers, includes an entire section on “quantitative finance.”

Still, it was not until a chance 2001 meeting in Bogotá with Mike Spagat, an economist at Royal Holloway College, University of London, that Johnson considered modeling something as human as warfare. Spagat had a Colombian Ph.D. student named Jorge Restrepo who was gathering data on attacks and death tolls, provided by the nonprofit Center for Investigation and Popular Education, so he could look for patterns in the conflict. Johnson hoped the numbers could tell them something about how the individual particles—in this case, insurgents rather than electrons—functioned when put together in large groups.

Soon the new team had a database that included more than 20,000 separate incidents from two and a half decades of FARC attacks. Johnson and Spagat expected that the success of the attacks, measured in the number of people killed, would cluster around a certain figure: There would be a few small attacks and a few large ones as outliers on either end, but most attacks would pile up in the middle. Visually, that distribution forms a bell curve, a shape that represents everything from height (some very short people, some very tall, most American men about 5'10") to rolls of the dice (the occasional 2 or 12, but a lot of 6s, 7s, and 8s). Bell curves are called normal distribution curves because this is how we expect the world to work much of the time. But the Colombia graph looked completely different. When the researchers plotted the number of attacks along the y (vertical) axis and people killed along the x (horizontal) axis, the result was a line that plunged down and then levelled off. At the top were lots of tiny attacks; at the bottom were a handful of huge ones.

That pattern, known as a power law curve, is an extremely common one in math. It describes a progression in which the value of a variable (in this case, the number of casualties) is always ramped up or down by the same exponent, or power, as in: two to the power of two (2 x 2) equals four, three to the power of two (3 x 3) equals nine, four to the power of two (4 x 4) equals 16, and so on. If the height of Americans were distributed according to a power law curve rather than a bell curve, there would be 180 million people 7 inches tall, 60,000 people towering at 8'11", and a solitary giant as tall as the Empire State Building. Although power laws clearly do not apply to human height, they show up often in everyday situations, from income distribution (billions of people living on a few dollars a day, a handful of multibillionaires) to the weather (lots of small storms, just a few hurricane Katrinas).

In Colombia’s case, decades of news reports confirmed that the number of attacks formed a line that sloped down from left to right. In general, an attack that causes 10 deaths is 316 times as likely as one that kills 100. The larger the event, the rarer it is.

At first the pattern seemed too clear and simple to be true. “Immediately I thought, ‘We need to look at another war,’” Johnson says. With the U.S. invasion of Iraq in full swing, he and his collaborators had an obvious second test. In 2005, using data gleaned from sources like the Iraq Body Count project and iCasualties, a Web site that tracks U.S. military deaths, they crunched the numbers on the size and frequency of attacks by Iraqi insurgents. Not only did the data fit a power curve, but the shape of that curve was nearly identical to the one describing the Colombian conflict.