The Mathematics of . . . Auctions

By the time an auctioneer shouts Sold! most bidders have already gone too far

A third of the way into A Beautiful Mind, the recent film about mathematician John Nash, a sexy blonde and four brunettes walk into a bar, batting their eyelashes. After a bit of ogling, Nash and his number-minded friends decide to compete for the blonde. Then Nash has second thoughts. If everyone goes for the same woman, he says, we'll just end up blocking each other out and offending the rest of the women. The only way for everyone to succeed is to ignore the blonde and go for the brunettes instead.

The scene is an attempt to illustrate Nash's most important contribution to game theory—the Nash equilibrium. Nash showed that in any competitive situation—war, chess, even picking up a date at a bar—if the participants are rational, and they know that their opponents are rational, there can be only one optimal strategy. That theory won Nash a Nobel Prize in economics. The math behind it is flawless and has transformed the way people think about evolution, arms races, stock markets, and ticktacktoe. There's only one problem: People aren't rational. 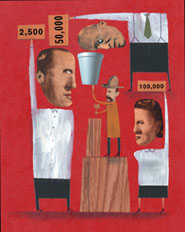 "They just aren't that smart," says Thomas Palfrey, an economist at the California Institute of Technology, "and if they are that smart, they don't think everybody else is that smart." Palfrey would fit right in at a greyhound track, with his swept-back hair and confidence-winning eyes. He says "basically" and "actually" a lot and discusses his work as if letting you in on a hot tip for the second race. The best strategy in any game against Palfrey is not to play at all: In the past few years, he has hit upon a variation on Nash's theory that describes true competitive behavior for the first time. More than any economist before him, Palfrey is likely to guess your every move.

The imbalance at the crux of the Nash equilibrium first struck him and his colleague Richard McKelvey in 1988, at a conference in Haifa, Israel. Game theorist Robert Aumann was giving a talk on a hypothetical game called centipede, in which two players take turns being offered the larger portion of a pot of money. If either player accepts, the game is over, and the loser gets the smaller amount. But each time the pot is declined, the amount of money inside grows. If it increases tenfold, a nervy player's winnings can grow from $10 to $10 million in only six turns. But the Nash equilibrium dictates a less daring strategy—take the larger pot the first chance you get. "This is ridiculous," Palfrey remembers thinking. "Game theorists keep talking about the centipede game as if they know what's going to happen, but in fact they don't know. So let's run an experiment."

Back at Caltech, he and McKelvey sat some students in front of a network of cubicled computers and let them play one another anonymously. "This was the first time I'd ever run an experiment that was done just to see what was going to happen," Palfrey says. "It was sort of like when you got your chemistry set for Christmas in fifth grade and you saw all these different chemicals and sort of threw them all in together to see what would happen. But we got really amazing data." Contrary to the predictions of the Nash equilibrium, only 37 of 662 centipede games ended in the first round. "The problem we had then was how to explain the data. How would you actually model players not being fully rational?"

The breakthrough came when the economists factored in altruism and skepticism. The players knew that their decisions didn't always make sense—and that their opponents weren't always rational, either—and that made their optimal strategy distinctly different from what Nash predicted. "You can never know what somebody else is thinking," Palfrey says. "All you can do is try to guess what they're thinking. And they're trying to guess what you're thinking, too." To model this behavior, Palfrey mixed a little statistics in with the theory behind the Nash equilibrium. Strategic mistakes and errors are part of the new formula, but the reasoning is the same as Nash's. There's still a single best strategy: Palfrey calls it the quantal response equilibrium.

In 1998, not long after Palfrey and McKelvey's ideas coalesced, Palfrey started running model auctions to test the theory. For years in economic circles, a controversy had raged over the subject of overbidding. Why is it that people in auctions routinely pay more than they should? Some economists, like Glenn Harrison of the University of South Carolina, thought that bidders simply value the joy of winning more than the satisfaction of getting an object for less than it's worth—especially when it's not worth much to begin with. Others, like Daniel Friedman at the University of California at Santa Cruz, thought overbidding might be the result of an aversion to risk: Most bidders would rather bid too high than run the risk of losing the item altogether.

To see who was right, Palfrey had a group of students join a series of computer auctions using real money. Each item up for auction was assigned a value. Then pairs of students bid against each other, with each student allowed a single bid. When a student won an item for less than its assigned value, he kept the difference. For example, if Palfrey told a student an object was worth $7, and the student won it with a $3 bid, he would win $4. Each student participated in 15 separate auctions. It was, Palfrey says, "a very simplified version of the New York Stock Exchange."

Every auction has a Nash equilibrium—a bid that perfectly balances the risk of losing to a higher bidder (and making no profit) against the possibility of greater profits (the lower you bid, the more money you'll make). In Palfrey's experiment, that optimal bid was half the object's given value, yet the students regularly bid much higher. According to the Nash equilibrium, they should have walked out of the experiment with an average of $14.20. Instead, they averaged only $10.70—exactly as Palfrey's quantal response equilibrium had predicted.

The experiment banged the gavel on the overbidding debate. Risk aversion and random mistakes pushed the bids higher—even in auctions for inexpensive objects. When overbidding was riskier than underbidding, the students were less likely to overbid. To Palfrey, bidders are like people in a parking lot faced with feeding the meter or potentially paying a parking ticket: They'll feed the meter even if the attendant only comes by once a year. "The more risk averse you are in an auction, the higher you bid," Palfrey says. And the more bidders overbid, the more their high bids begin to snowball.

These days Palfrey is testing quantal response on "all-pay auctions," where everyone who bids has to pay up—whether they win the bidding or not. "It has applications to things you wouldn't normally dream of," he says, like political campaigns, where even losing candidates have to spend a fortune, and mating contests in nature, where two males may fight to the death for a single female. "The real power of this is that it's replicable," Palfrey says. "It's not just your group of eight people in a lab. Somebody could run the auction at Harvard, and they'll see the same thing."

Even the most rational people can be predictably irrational, Palfrey concludes. In some business schools, professors make an exercise of auctioning off a dollar to their students, stipulating that both top bidders will have to pay. The best strategy is simply not to bid, Palfrey says. "But then it's tricky, because if everyone else realizes this, then why don't I bid 10 cents? It would be irrational for anybody else to bid 11 cents. Well, the problem is that some clown out there is going to bid 11 cents." Once the bidding gets going, he says, often only the professor can stop it.