Architects and engineers are working on ways to swap steel and glass for strong, sustainable wood-based materials. 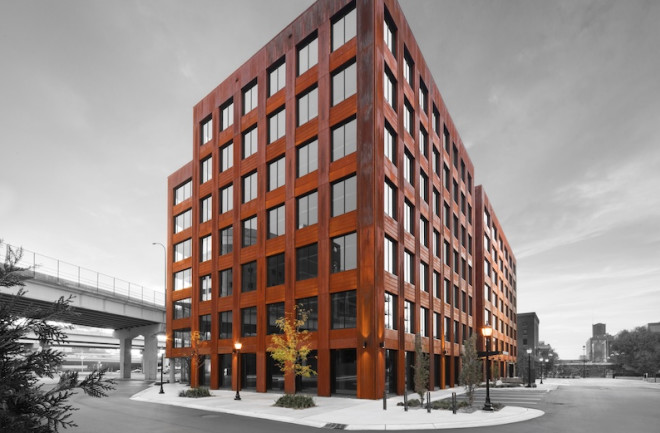 This article appeared in the June 2020 issue of Discover magazine as "Reach for the Sky." Subscribe for more stories like these.

When the empire state building was completed in 1931, the 102-story skyscraper ranked as the tallest in the world, a beacon of American progress as well as a lightning rod for Midtown Manhattan. And the material that made it possible was steel — or so people believed until 2015, when Canadian architect Michael Green showed that an identical structure could be fabricated out of timber.

Green was not proposing replacing the 20th-century icon. His plans are far more radical. Green wants the global construction industry to replace steel and concrete with high-tech plywood.

“We’re not even close to meeting global needs when it comes to housing people in a safe and affordable way,” he says. Plus, the construction of buildings is responsible for around 10 percent of all global climate emissions. Green claims that these interrelated problems can both be addressed by building with timber from sustainably grown forests. To show the high-reaching potential of wood in the real world, in 2016 he erected a seven-story high-rise in Minneapolis, the tallest wooden building in the U.S. at the time.

He used a plywood popularized in the 1990s. Losing market share to concrete, the lumber industry had sought to produce a material that would be both sturdy and cheap. By gluing stacks of wood panels together into massive blocks they called “mass timber,” the engineers effectively replicated traditional masonry. And they added several features that neither stone nor concrete could claim: The new material could be cut with high precision, making it suitable for affordable, high-efficiency prefabrication. Plus, it was relatively light, making it practical to transport from a factory to the construction site. But what most impressed Green was the strength: When the wood panels are cross-laminated, or glued with their grains running in alternating directions, the material is, pound for pound, stronger than steel.

Wooden buildings actually have the potential to roll back climate change, says Green, because trees soak up carbon and incorporate it into their wood as they grow. “You’re holding on to that carbon until [the wood] burns or rots.” And unlike ordinary lumber, mass timber is highly resistant to fire.

These arguments are catching on with other builders, who are making their own wooden high-rises higher and higher. The current record is an 18-story tower in Norway. An 80-story skyscraper is planned for London.

But the more profound transition is less glamorous, according to Green. “The dairy industry in the U.S. didn’t move to organic milk until Walmart decided to stock the shelves with it,” he says. And now “Walmart has announced they’re building a huge new campus in Arkansas that will entirely [be made of] mass timber, and Amazon is looking closely into creating mass-timber distribution centers.”

Mass timber has affected the construction industry intellectually, too, according to Lars Berglund, director of the Wallenberg Wood Science Center in Sweden. “It’s suddenly a good engineering problem: How do you design these structures?” he says.

From Berglund’s perspective, wood offers many additional opportunities when considered microscopically. For more than a decade, he’s investigated potential uses for compounds found in wood pulp. His goal is to develop an industrial-strength operation loosely analogous to the refineries that extract useful chemicals from crude oil. His “wood refinery” will allow manufacturers to exploit and optimize the physical and chemical properties that hold trees together. For instance, lignin, a structural compound that makes plants woody, could be refined to make adhesives or bioplastics that nanocellulose fibers could strengthen like the fibers in fiberglass.

But for the moment, Berglund is doing windows. By chemically removing the lignin from wood veneers and injecting the panels with acrylics, he’s making semitransparent sheets that don’t shatter, and even contribute structural support to buildings — a key advantage over conventional glass panes. In the future, as Berglund gains greater command over the material properties of wood, the acrylics could be replaced with lignin bioplastics, making the windows entirely arboreal.

Green admires the research at the Wallenberg Center but doesn’t think it goes far enough. “In 10 years, I hope that we’re not cutting down trees the way we do now,” he says. Instead, he wants to see wood grown in factory conditions — much as the food industry is now looking to grow synthetic meat — where all of the material qualities can be completely controlled.