The Many-Worlds Hypothesis And The Hardest Super Mario Level 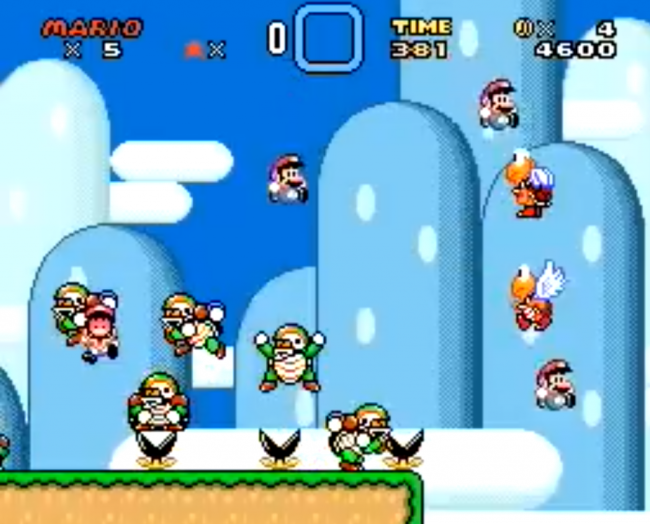 Don't have time to read the article with your eyes?

Listen to it with your ears!

In 2007, a Japanese youth hacked a version of Nintendo’s Super Mario World specifically to frustrate the goombas out of his friend. Distilled and translated from a longer Japanese title, this “Kaizo Mario World,” as it came to be known, was one of the first ultra-hard Super Mario hacks to make it around the world. The file quickly spread across the Internet to annoy more than the original recipient. It was filled with invisible blocks intentionally placed to thwart jump attempts, low time limits, and instant-death enemies. Despite the challenges Kaizo Mario presented, players soldiered on, finding ingenious, pixel-perfect solutions to the levels. A successful playthrough of any one of them is a privilege to watch, the fruition of many hours spent restarting from the beginning of levels.

For all the Kaizo playthroughs now on the web, one video in particular is fascinating to watch. It is a superimposition of the 134 total attempts required to complete a single level (only two attempts were successful). Not only is the video technically impressive, I think it can teach a fundamental interpretation of quantum mechanics. What you below see is the “Many Worlds Hypothesis” of Super Mario: http://www.youtube.com/watch?v=T2OytHzZ72Y Over 60 years ago, Hugh Everett, a graduate student at Princeton at the time, came up with the idea that our universe is actually one of an infinite number of parallel universes. Everett’s insight was that instead of making special concessions for observers and observed, instead consider all the observers in the universe as quantum mechanical systems interacting within that universe (like how Deepak Chopra does, only intelligible). Each time one system interacts with another, the universe would split. In one universe you read this sentence correctly, in another you do not. All possible interactions happen. Of course, because this is quantum mechanics, I am glossing over quite a bit. Physicist Sean Carroll does a wonderful job explaining the many-worlds concept below (starting at 1:28): http://youtu.be/ZacggH9wB7Y If the many worlds hypothesis is the correct interpretation of quantum mechanics, the super-imposed Kaizo Mario World is demonstrating basically how it works. Not quite an infinite number of Marios begin, and during many quantum interactions or “observations,” fully 132 Mario-filled universes were utterly destroyed. The level is the universe and the playthroughs the “many worlds.” Each Mario that you see impaled by a spike or smacked by a bullet is a possible branch off of the successful runs that you ultimately see. In a way, it’s like life—despite all the possible accidents and missteps that could have ended your timeline, you are still here. You are the Mario jumping across the finish line of your life. Who knew you could get such philosophy out of Nintendo? --