The Loneliest Volcano on Earth 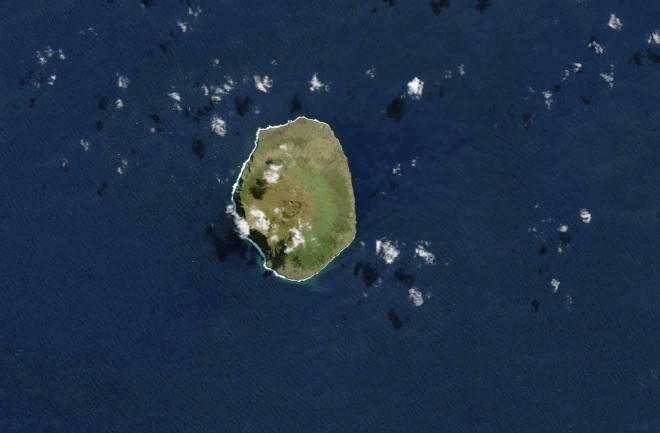 Amsterdam: The Lonely Island. Seen on April 11, 2015. Landsat 8/OLI NASA/USGS We talk a lot about volcanoes that are near population centers---and rightly so. They can produce deadly eruptions that have local and global consequences. That got me thinking ... what about on the other end? What is the most remote active volcano on the planet, farthest from people or even farther from any other land mass that people might live. Now, I'm not sure if this is categorically the most remote volcano, but I'm pretty sure it has to be close. I present you Amsterdam Island in the southern Indian Ocean! Amsterdam Island is staggeringly far from anything:

Heck, the closest populated area I could find was the (also volcanic) Kerguelen Islands, over 1,400 kilometers (870 miles) to the southwest of Amsterdam Island. If you look up Amsterdam Island in the Global Volcanism Program database, you'll find that a grand total of zero people live within 100 km of the volcano (beyond a research station of 30 people that is not permanently populated). The island isn't barren, though.

Over 1,000 wild cattle live on Amsterdam, left there in the 1870s by people who tried to colonize the island

. (UPDATE: It appears that Amsterdam Island is lonelier than I thought. The last cattle were eradicated in 2010). Beyond that, this island is far from everything and everyone.

So what is a volcano doing in the middle of the Indian Ocean? Well, it is on the edge of the Antarctic plate in an area of tectonic spreading, where the Antarctic plate is moving away from the Indoaustralian plate (see above). There is a small cluster of volcanoes in the area, including Amsterdam Island, the spectacular St. Paul Island and the submarine Boomerang Seamount. Even with its remote location, St. Paul Island was caught in the act of eruption in 1793. Boomerang Seamount may have erupted as recently as 1995, but that is based on isotopic measurements of volcanic glass dredged from the submarine volcano. Amsterdam Island itself has had a complex history. The volcano has two calderas on an island of only 7 by 10 kilometers. These are likely from fairly passive collapses like we see at Hawaii's Kilauea rather than a massive explosion---Amsterdam Island erupts mostly basaltic lava in the form of lava flows. If you drain out enough of the basalt magma during an eruption, the land surface can collapse forming the small calderas. No one has ever seen an eruption at Amsterdam Island, but the volcano has area that look geologically young. This means that the lava has not been highly revegetated or weathered, so it could have erupted as recently as 100 years ago. Some research looking at the composition of lava erupted from Amsterdam Island suggest that it could be a fairly young oceanic island volcano that is transitioning from erupting lava like we find at mid-ocean ridges to more silica-poor lava like erupt at places like Piton de la Fournaise on Reunion Island. That being said, not many people have studied the products of this remote volcano. Amsterdam Island is known for making some impressive ripples in clouds (see below) in the southern Indian Ocean thanks to the fact that it is one of the few pieces of topography.

With its isolated location and lack of population, how would we ever know if Amsterdam Island erupted? Satellite images will be a big clue, as they are at the almost equally remote Heard Island. Infrasound might also work if any explosions are part of the eruption. However, there is the chance that the lonely volcano (but possibly not the loneliest) could erupt without anyone even noticing---and that is what happens when you might be the most remote volcano on Earth.