The Lives of the Galaxies

Astronomers gained new insights into the life cycles of galaxies. 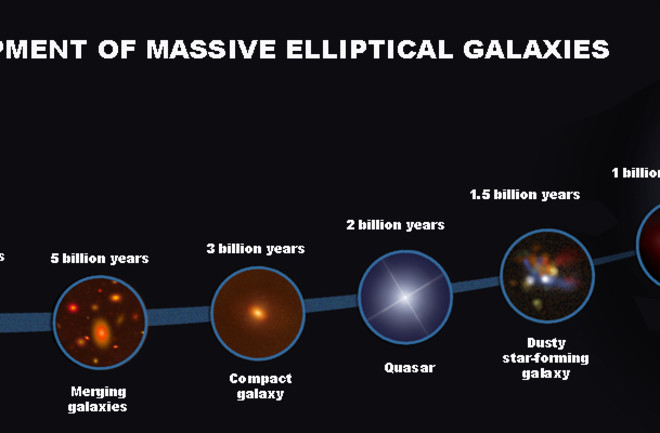 Sign up for our email newsletter for the latest science news
This artist's concept illustrates the two types of spiral galaxies that populate our universe: those with plump middles, or central bulges (upper left), and those without them (foreground). | NASA/JPL-Caltech

If you’d never met a human, figuring out that babies and seniors are the same species might not be easy. Astronomers have to make such leaps all the time, matching snapshots of youthful galaxies with mature counterparts and filling in missing links.

Take the universe’s most massive galaxies — blobby, indistinct ellipticals. Until this year, no one understood how they got so gargantuan. But in January, astronomers used optical and infrared telescopes to look back nearly to the beginning of the universe, just 1.5 billion years after the Big Bang, where they saw newborn ellipticals — ancient galaxies so dusty they’re nearly invisible. In their early years, these galaxies formed stars a thousand times faster than the Milky Way does today, eating through their initial gas reserves in just 40 million years. After that, they grew slowly by mating with other galaxies, eventually snowballing into today’s mature elliptical galaxies.

Now, 10 billion years later, they don’t make new stars at all. Full of old, rose-colored suns, they are “red and dead.” Theorists thought they’d become barren in their old age, lacking the cool gas that condenses into new stars. But in February, another team of astronomers discovered that some have plenty of cold gas — they just can’t use it. These galaxies’ supermassive black holes work against them, devouring nearby gas and exhaling powerful jets that either heat the remaining cold material or push it out of the galaxy entirely.

But not all the news this year focused on ellipticals; spiral galaxies showed up, too. This branch of the galactic family comes in different shapes: Some spirals have flat disks, while others are fat. In February, a third team of astronomers discovered the lifestyle difference: spin speed. As with pizza dough, the faster you twirl it, the thinner the crust becomes. Our own svelte galaxy spins at a speedy 600,000 mph.

Disks thin out or don’t, stars form or don’t, and galaxies grow gigantic but geriatric. As any astro-anthropologist would attest, making sense of our galaxy requires making sense of others that are younger, older, fatter, thinner and differently hued.