The Limits of Life Beneath Deep Sea Hydrothermal Vents 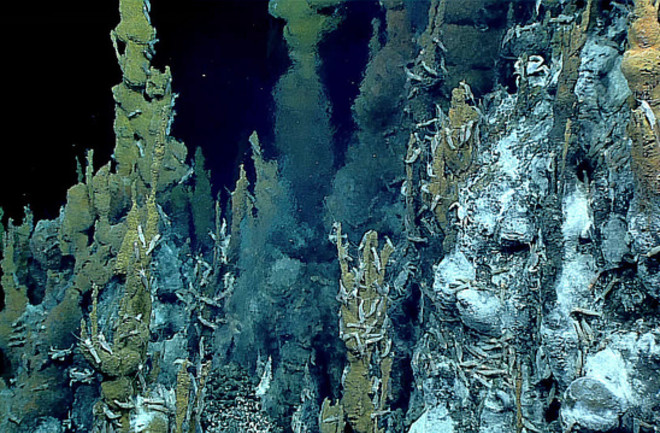 A recent research study examined microbial life beneath deep sea hydrothermal vents. (Image: NOAA) How hot is too hot for life to survive? Ever since microbes were discovered squirming around in hydrothermal springs several decades ago, the limit of heat-loving (thermophilic) organisms has been a moving target. The current record-holder is “strain 121,” an archaeon isolated from the Mothra hydrothermal vent deep beneath the surface of the northeast Pacific Ocean; suitably enough, it can grow at a blistering temperature of 121 °C. There are some physical limitations of biological activity at high temperature. Enzymes unfold, as rapid molecular bond vibrations tear intricate molecular structures apart, obliterating their functional capabilities. Individual amino acids lose their “handedness” as geometrical arrangements of molecular structures equilibrate with heat; since all known biological amino acids are “right-handed,” organisms must spend a lot more energy re-shaping amino acids to fit the template. DNA bases “A” and “G” falter at exponentially higher rates as the temperature goes up, leading to murderous rates of mutations. Despite these assessments of biomolecule stability and the search for the thermal outliers, there haven’t been a lot of systematic studies of how habitability at seafloor sites changes with temperature. Sure, an impressive organism or two can eke out a living at 121 °C in the lab, but is that also true in the real world, where conditions could be much more variable? And are viable communities around continuously up to that thermal limit? To investigate these quesitons, a team of researchers led by Katsunori Yanagawa from the Japan Agency for Marine-Earth Science and Technology (JAMSTEC) examined sediment cores drilled from beneath active hydrothermal vents off the coast of Japan. By digging beneath hydrothermal vents, the team was able to compress their study into a contained vertical transect. At just 50 meters beneath the seafloor, sediments were cooking at more than 210 °C; in a different study that extended the deepest detection of viable cells, the temperature was only 60 °C at two and a half kilometers down. So with their relatively constrained system, Yanagawa and his team could sample sharper gradients, and with samples easier to collect, they could do more studies. Among the experiments, the researchers looked for imprints of life by counting cells and, to detect even fewer organisms, amplifying DNA using quantitative polymerase chain reactions. The top several layers of sediment revealed vibrant microbial communities, but as they went lower, the signals of cells petered out. This wasn’t too surprising, given the high thermal gradients inherent in hydrothermal vents, but when they looked at the temperature of the last habitable horizon, it was only 45 degrees. Typically, if a microbe can survive somewhere, it will, so the absence of hyperthermophiles like Thermococcales, Methanococcales, and Archaeoglobales seemed like one of the surprisingly few examples of organisms not filling the maximal extent of their niche space. But a clever investigation of several geochemical components painted a different picture of fickle subsurface hydrology. Sulfate, for example, appeared at high concentrations in certain layers of the sediment cores. Yanagawa attributed this chemical signal to dissolved anhydrite – a calcium sulfate mineral – but because anhydrite is only stable on the seafloor at temperatures above 150 °C, the environment must have experienced such scalding conditions at some point in the past. Another “mineralogical thermometer” is the ratio of oxygen isotopes in clay minerals; measurements demonstrated that the minerals formed in a milieu of at least 138 °C. The JAMSTEC team also looked at the geological influences of the sediment cores. They found several watertight layers, which could have isolated parts of the sediment column from new microbial colonists. So even after the local temperature had decreased to a comfortable sub-121, certain segments of the subseafloor could remain a dead zone for a while, until microbe-seeded water could poke through the sediment boundary. These multidisciplinary interpretations – drawing from geochemical thermometers, fluid dynamics, and geology – demonstrate the importance of considering a region’s full environmental history when contemplating its habitability. It’s not enough to only think about thermal limits, even if it is the limiting factor: figuring out when and precisely where that parameter may have been limiting provides a more realistic view of how ecosystems operate.