The Lava That Doesn't Erupt Anymore 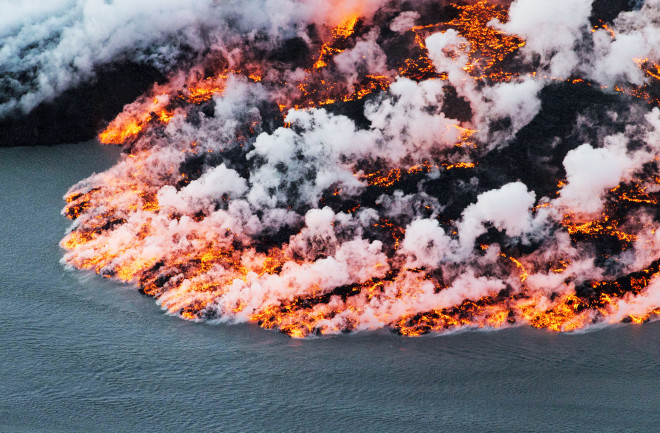 Volcanoes have been a persistent feature on Earth since the planet condensed out of the primordial nebula of our solar system. The scale and style of that volcanism has changed dramatically over that 4.5 billion years---heck, after Thera bumped into proto-Earth to form the Moon, we probably had a planet-wide lava lake as the molten Earth coalesced and cooled from the collision. However, we lack much of a record of that tumultuous time beyond a few zircon found in younger sediments. Figuring out what exactly the volcanism might have been like that far back is a little bit of scientific storytelling. If we look at the first few billion years of the planet, we can guess that we might have seen some very different kinds of volcanic eruptions. During the Archean Eon (~3.8 to 2.5 billion years ago), a type of lava that has been rarely seen since erupted in many places across the early Earth: komatiite, a type of magma that is hotter, more liquid, and denser than any lava that erupts today. Basalt, which is common in volcanic eruptions across the globe, is the most mafic (that is, lowest silica and highest magnesium) lava erupting on modern Earth. It is usually 45 to 52 percent silica by weight and full of plagioclase feldspar, olivine, and pyroxene. When basalt erupts, it is typically over 1100ºC and has a relatively low viscosity so that gas can escape, leading to lava flows like what we see in Hawaii. But early-Earth komatiites are even more mafic---actually, we're talking ultramafic (yes, that's a real geologic term). Komatiites typically are less than 45 percent silica by weight and are chock full of olivine and pyroxene, making them much more magnesium and iron-rich (and denser) than basalts. A typical komatiite is 18 percent magnesium by weight, roughly double that of your typical basalt. Those changes in composition means that komatiites are hot, erupting at temperatures between 1300-1600ºC. Some komatiite lavas even have chromite crystals, betraying how much chromium they have. This composition, with abundant magnesium, iron, and chromium, indicates that komatiites are a product of melting the Earth's mantle. The composition of komatiite lava is pretty close to what we might expect if we were able to sample the mantle underneath our feet, so if you melt a good portion of it (maybe 50 to 60 percent!), you'd get a komatiite composition. Basalt is also derived from melting the mantle, but in that case, only 10 to 20 percent is typically melting thanks to fractional melting (the lowest temperature minerals melt first, leaving behind the more mafic minerals/elements).

Komatiite lava from the Komati River Valley in South Africa, showing the spinifex texture typical for these lavas.James St. John There are lots of questions about komatiite lavas out there: How did they form and why don't we see them today? What is up with the strange spinifex texture (above) that we see in olivine and pyroxene in komatiites? What might a komatiite eruption have been like? The most recent komatiite eruption was likely about 90 million years ago and those rocks are currently found on Gorgona Island off the coast of Colombia. These komatiites are likely from a mid-ocean ridge volcanism, so they might be the record of the last gasp of "hot interior Earth." You need to a high geothermal gradient (how hot it gets as you go down) to make komatiite lava because without it being hot, you'll never melt the mantle 50 to 60 percent (*unless you add water, but that's a whole other story). The Earth has lost a lot of heat to space and isn't as productive in terms of generating its own heat from radioactive decay of elements inside the mantle. The interior of the Earth might not be hot enough to produce many (if any) komatiites, and definitely not at the rate it was back when the Earth was only 1 or 2 billion years old. As for what a komatiite eruption might have looked like, we don't have a lot of evidence. Komatiites found in the rock record indicate that they were mainly lava flows. The heat and composition of komatiites mean that they have a lower viscosity than basalt (possibly 100 times lower), so the lava flows would be exceptionally runny, so many these lava flows would have flowed faster and further than modern basalt eruptions (like Holuhraun in Iceland). However, they were also very hot, so when they did erupt, they probably cooled fast, so maybe they didn't end up traveling far unless they established a lava tube system?

Sinuous Rilles on the Aristarchus Plateau on the Moon. These features may have been formed by komatiite lavas.NASA/LROC/ASU Some geologists think that we can see the evidence of komatiite eruptions ... but we have to look at the Moon. Sinuous rilles (above) are winding valleys on the moon that might be a few meters to a few kilometers across and sometimes over 250 kilometers long. It has been suggested that these rilles are volcanic features carved by lava thermally eroding (melting) their way through the lunar crust, likely caused by komatiite lava flows. Maybe on early Earth, we would have seen these lava valleys cut by super-hot komatiite flows. There is even the possibility that komatiite-like lavas are erupting on Io or some of the volcanic features seen by Magellan on Venus may be the product of komatiite volcanism. They might be a thing of the past, but back in the Archean, komatiites may have been very common. Some geologists postulate that the oceanic crust on early Earth may have actually been komatiite rather than basalt as it is today. All we really know is that the conditions of melting the mantle and the resulting volcanism were not the same back when the Earth was young ... and komatiites are a record of that very different planet.