The Jesuit Astronomer Who Conceived of the Big Bang 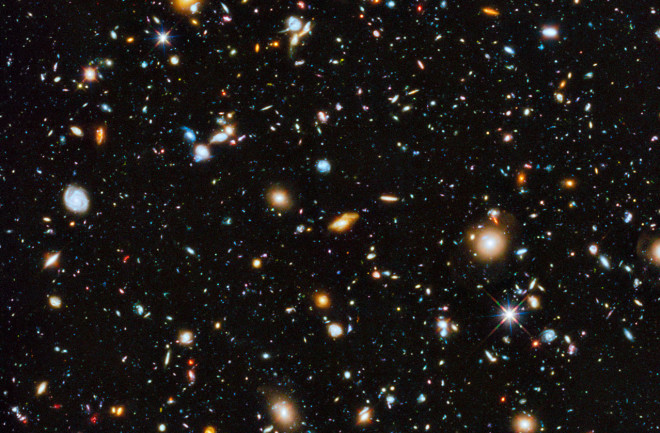 All of the galaxies we see in the distant universe are speeding away from us. This clue led Lemaitre to the idea of an expanding universe: the Big Bang. <span italic='true'>Credit: NASA/ESA/H. Teplitz and M. Rafelski (IPAC/Caltech)/A. Koekemoer (STScI)/R. Windhorst (Arizona State University)/Z. Levay (STScI) </span>

In 1927, a prescient astronomer named Georges Lemaître looked at data showing how galaxies move. He noticed something peculiar – all of them appeared to be speeding away from Earth. Not only that, but the farther away they were, the faster they went. He determined a mathematical way to represent this, and connected his relationship to Einstein’s law of General Relativity to produce a grand idea: That of a universe continually expanding. It was a radical idea then, but today it fits with our conception of a universe spawned by a Big Bang.

If you’re an astronomy trivia buff, the name associated with the Big Bang is Edwin Hubble, who also has a rather famous telescope named after himself. Hubble also came up with the concept, but Lemaître beat him to the punch, though his idea got little attention at the time. Now, he may finally share in the recognition for his revolutionary theory.

It’s too late to rename the Hubble Space Telescope, which is in its twilight years of use anyway. But astronomers are considering renaming the law that explains how the universe expands, from the Hubble Law to the Hubble-Lemaître Law.

The matter was brought to a vote in August at a meeting of the International Astronomical Union in Vienna, Austria. This is the same body that decided by a vote in 2006 to demote Plutofrom planet to dwarf planet. It’s a decision that still stings for some people, both astronomers and members of the public alike. It’s especially contentious because the vote only included the astronomers who were physically present at the 2006 meeting – a tiny fraction of all IAU members. Seeking to avoid the same ruffled feathers, the IAU is taking a different tack this time. Instead of making a final decision at the meeting, attending members took a straw poll to see if there was widespread interest in the change. There was.

Now all 13,000-plus members of the IAU will get to have their say in the form of an electronic vote before the end of the year. So who is this priest-scientist they’re considering honoring with a foundational cosmological law?

Georges Lemaitre was a Catholic priest who was the first to describe the expanding universe. <span italic='true'>Credit: Courtesy of the Catholic University of Louven</span>

Georges Lemaitre was a Catholic priest who was the first to describe the expanding universe. Credit: Courtesy of the Catholic University of Louven

Georges Lemaître was born in Belgium. He volunteered for service in the First World War, interrupting his engineering studies to do so, and earned a medal for his service. Afterwards, he plunged back into academia, this time in physics and math, and began  studies to be a priest at the same time. He earned his PhD in 1920, and was ordained in 1923.

To some in this increasingly polarized age, it might seem odd for a man to be a soldier and a scientist, a religious and scientific devotee in equal measure. But to Lemaître, it seemed to form a coherent whole. He saw his faith and his research as separate enterprises, which neither conflicted nor aided each other. They were simply parallel explorations of the cosmos, both equally worthy of study and contemplation.

After he published his theory of an expanding universe, and after Hubble published his, Lemaître continued his ideas, building heavily on Einstein’s mathematically-dense framework. He followed the idea of an expanding universe backwards to a logical conclusion. In 1931, he began discussing his “Primeval Atom Hypothesis,” which stated that the universe began as a single point and has been expanding ever since. He also called it the “Cosmic Egg.”

Modern audiences will recognize this as an early version of the Big Bang Theory, which sometimes finds itself under attack from those who prefer a divine creation story. But Lemaître faced most of his criticism from fellow scientists, who objected to his theory in large part because it sounded too religious. The idea of a universe that had a beginning flew in the face of the scientific consensus of the time, which preferred a static, unchanging universe.

But Lemaître’s idea was based on a purely physical argument. Eventually the scientific community came around, and discovered strong evidence for what came to be called the Big Bang. That evidence even includes “fossil radiation,” which Lemaître posited might appear as cosmic rays, but which astronomers eventually discovered as the cosmic microwave background radiation.

The Church Weighs In

It’s worth noting that the pope in Lemaître’s time, Pius XII, was delighted that a Catholic priest had conceived of a scientifically valid “creation” story for the universe. It’s also possible, reading between the lines, that the Church was feeling some guilt about the whole Galileo debacle, and looking to clear their conscience. Lemaître himself was less than pleased by the pope butting in, as he viewed his scientific pursuits as completely separate from his religious views, and didn’t appreciate the pope muddying the waters. His Holiness was persuaded to simmer down, but the Catholic Church remains officially in agreement with the Big Bang Theory, and Lemaître retained his good standing in the Church until his death.

But so what if Lemaître was an interesting person? The scientific law has been known as Hubble’s Law for decades now. And if we change this, doesn’t that open the door to changing names of all sorts of things? And what does it matter, if the underlying science remains unchanged?

All valid points. But if science is about anything, it’s about revealing the truth. And the truth is that Lemaître arrived at the discovery first. Doesn’t he therefore deserve the credit?

Then again, Lemaître himself never contested Hubble’s acclaim. He seemed content to let the science speak for itself, whatever it was called.