The Inspiring Boom in "Super-Earths"

At last we are finding rocky planets like our own. But some are pretty weird: The smallest may have a mineral-vapor atmosphere that condenses as lava rain or rock snow. 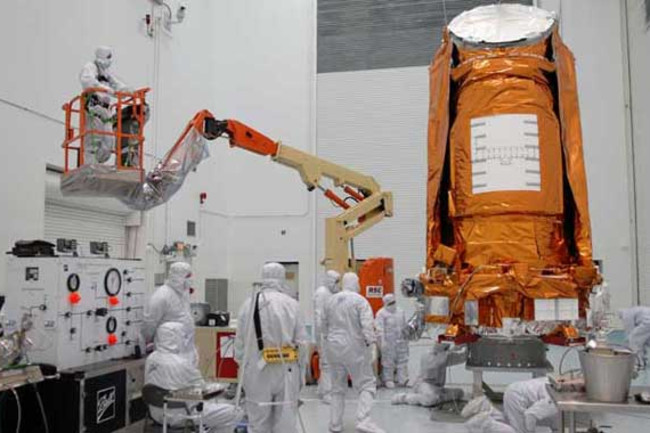 Workers at Astrotech's Hazardous Processing Facility in Titusville, Florida, mount the Kepler spacecraft on a stand for fueling. | Image courtesy of NASA/TM Jacobs

A recently discovered planet with the unpoetic name Corot-7b, orbiting a yellow-orange star 450 light-years away, is the smallest confirmed super-Earth—a dense, compact planet unlike the many gas giants spotted elsewhere in our galaxy. This find hints that the universe may teem with rocky worlds, including some that may genuinely resemble ours in size and temperature.

Corot-7b is the first such planet whose size has been measured, proving that it truly is a compact, dense world. But it may have plenty of company. Several other super-Earths have been identified in systems much like our solar system, with small planets closer to the star and giants in the outer orbits. Astrophysicist Alan Boss of the Car­negie Institution of Washington thinks this structural similarity gives a reason to suspect that these planets, too, are rocky bodies that formed much the way Earth did.

“We’re seeing strong hints that super-Earths are very common,” says Scott Gaudi, an astrophysicist at Ohio State University who estimates that more than 20 percent of stars have such planets. That could translate to some 50 billion super-Earths scattered throughout the Milky Way.

In the 1990s the first discovered exoplanets (planets orbiting other stars) were Jupiter-like giants, betrayed by the slight gravitational wobbles in the motion of their parent stars. The size of those wobbles depends in part on the planets’ mass. As instruments improved, astronomers detected smaller wobbles caused by smaller planets, until in 2004 a team using the Hobby-Eberly Telescope was arguably the first to find a super-Earth, 55 Cancri e. Others were revealed when their gravity briefly magnified the light of a distant star, a process known as gravitational lensing. The OGLE project at Las Campanas Observatory in Chile picked up two super-Earths this way in 2005.

In February astronomers announced the discovery of Corot-7b. It was found by a third technique: As it transited its parent star, it blocked a little of the star’s light, and the European Corot satellite detected this periodic dimming. The amount of blocked light reveals the size of the planet—in this case, less than twice the diameter of Earth. “It is the smallest radius measured of any exoplanet,” says Corot team member Jean Schneider of the Paris Observatory.

So far about 20 super-Earths have been found. All are expected to be small planets with a rocky surface, though they may have a wide range of temperatures and atmospheric conditions. Astrophysicists also suspect that some super-Earths could contain water, as either an ocean or an ice shell. It should be possible to check: Rocky planets with water would probably be less dense than those without it, and a combination of the transit and wobble methods reveal a planet’s density.

The new planet’s mass and density are not yet known precisely, but a joint effort by the Kepler spacecraft that launched in March and the W. M. Keck telescopes could provide such data for this and other planets. Designed to detect transits, Kepler might find and measure hundreds of super-Earth candidates. Back on the ground, the Keck telescopes will home in on the newfound objects to determine their mass and confirm that they are planets (not stars).

Super-Earth researcher Diana Valencia of the Côte d’Azur Observatory thinks that rocky exoplanets should resemble ours in another crucial way. “I believe that plate tectonics are likely,” she says. That could be significant for life, because the cycling of elements into Earth’s crust and out of volcanic eruptions helps keep our planet habitable by stabilizing atmospheric temperature.

Arguably the most hospitable super-Earth yet detected is Gliese 581 d, 20 light-years away. Although this planet circles a feeble red dwarf star, simulations indicate that it probably has a thick atmosphere of carbon dioxide, which may keep its surface warm enough to hold liquid water.

Corot-7b is less promising. It probably rotates with one side always pointed at its star. That side must be extremely hot. “Calculations show that it is more than 2000 kelvins [3000°F],” Schneider says, which would melt rock into a sea of lava. He thinks the planet might have a mineral-vapor atmosphere that condenses as lava rain or rock snow on the cold nightside.

Astronomers hope to analyze the atmospheres of these and other super-Earths by examining the starlight filtering through them, perhaps using the James Webb Space Telescope, scheduled for launch in 2013. This analysis could even hint that some planets are not just habitable but actually inhabited. “Carbon dioxide and water in a planet’s atmosphere would be signs that a planet might be rocky and habitable, while oxygen and methane would be strong indicators that it may harbor life,” Boss says.

ExoplanetsPlanets that orbit a star other than our sun. To date, more than 340 such planets have been discovered.

TransitingThe movement of a celestial body in front of a bigger one, partially obscuring it.

Gas giantsGaseous, low-density planets many times as massive as Earth and composed mainly of hydrogen and helium.

KeplerA NASA space telescope that will monitor more than 100,000 stars in our galaxy for the periodic dimming associated with transiting planets.