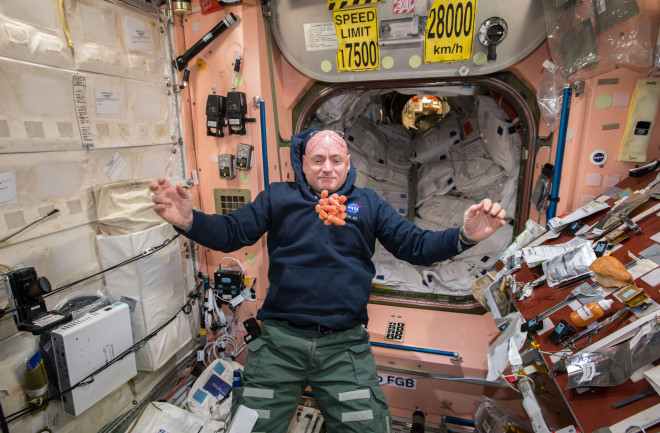 Astronaut Scott Kelly posing before snacking on carrots during his year in space. (Credit: NASA)

Scientists are still trying to figure out how the human body responds to long-duration spaceflight. It’s an important and open research question as NASA moves toward more deep space missions. In particular, a mission to Mars could require at least a three-year round trip that would take a toll both physically and psychologically.

At the American Association for the Advancement of Science conference last week, researchers revealed new insights into the physical effects of long-term stays in space. They focused mostly on studies of astronaut Scott Kelly, who spent a year on the International Space Station while his twin brother Mark Kelly stayed on the ground.

Meanwhile, another group of researchers revealed a new large-scale study of the psychological effects of space’s darkness and isolation, as if the dangers of mishaps, microgravity, and radiation weren’t enough. The scientists say it’s one of the first such efforts to tap a large amount of real data gathered from simulated space missions on Earth.

In short, researchers found lots of differences between the twins, but no large causes for concern. Scott Kelly’s body reacted quickly and strongly to being in space. Researchers said that within days, his body showed notable differences to his twin and his baseline rate from before he left Earth. However, none of those changes were unique compared to other people in similar high-stress, high-risk environments, like mountain climbers or scuba divers. And, once he was back on Earth, Scott Kelly  had mostly re-adapted to life on terra firma after just days, though some effects persisted for up to six months. Some of those specifics still haven’t been published.

Researchers looked at the Kellys’ blood to check their DNA, but they also studied their urine and stool samples, which offer a better look at the gut microbiome, as well as system-wide changes in their bodies. Scientists were particularly interested in any changes on the genetic level. Scott Kelly showed the most changes in his gene expression (which genes are activated) related to DNA repair and the immune system, which researchers said seems a natural enough response to the dangers of life in space.

The two biggest threats to humans spending long periods in space come from low gravity and cosmic rays. Cosmic rays aren’t really radiation – they’re the dense nucleus of an atom traveling close to the speed of light, and they can pack quite a punch to living cells and DNA. Despite years of study, scientists still aren’t sure of the long-term threats, if any, of life without gravity.

Space is Lonely and Stressful

Of course, the human mind is at least as fragile than the body. And that’s why researchers at Northwestern University decided to focus on the psychological impacts of long-duration space travel. This includes the isolation, sleep-deprivation, and delayed communication time with ground control that plague crews in space, not to mention the close quarters contact with other members of the mission team. The team tested how well subjects could complete tasks that took creative thinking and problem solving under the simulated conditions of outer space.

In short, the results weren’t great: Among eight teams of fake space mission crew members, they only successfully completed their tasks 20 to 60 percent of the time.

Many of the researchers’ goals centered on teamwork. They wanted to find models that let them predict how well crew members will get along, and then find coping mechanisms and workflows that might allow astronauts to be better at  getting their work done.

Space organizations will need to be confident of the physical and mental safety of their crews before deep space missions can occur regularly.