The How and Why of Rockets' Staging 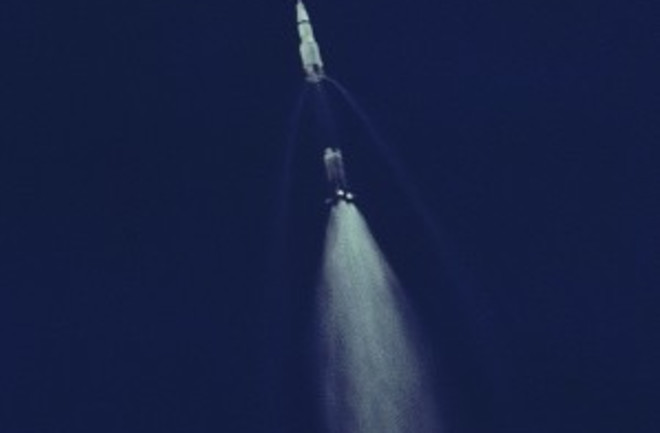 When we talk about spaceflight — modern or vintage, manned or unmanned, orbital or deep space — launch vehicles all serve the same purpose: overcome gravity and get the payload off the Earth. Whatever the mission, it starts with a rocket launch. Even, because I can hear you asking about it, payloads that were launched from the payload bay of the space shuttle; that payload got to orbit via a shuttle launch. And because all rockets harness the same technology, they all share one common element. Whether they’re big or small, they all go through staging.

Every rocket that has ever put anything into space has been a multistage rocket. Every payload has needed an extra kick of thrust to overcome the weight of the rocket and payload to get it into space. It’s a tricky balancing act. It’s not just the payload that has mass we need to cancel out with thrust against the downward force of gravity. The rocket’s body has mass as well, as does the fuel on board. The payload is typically the smallest portion of mass on a launch. The propellants — the fuel and oxidizer — weigh the most.

This is where staging comes in handy. Because the propellant is heaviest, as it burns the mass of the whole rocket goes down. That means that the rocket structure becomes dead weight, which needs more fuel to keep lifting it, which means the overall mass goes up… it compounds from there. Staging is a way of getting rid of dead weight so the energy of the burning engine is transferred to the payload so it gets into orbit! Getting rid of dead weight is done via staging, the process of discarding spent rocket stages, and there are a few ways this can be done.

Serial staging uses stages attached one on top of another. The first stage ignites at launch and burns through its fuel until its propellants are gone. Now spent, the useless first stage falls and the second stage takes over. This is a staging manoeuver. Depending on the rocket, the second stage could get the payload into orbit or a third or fourth stage will ultimately be the one to deliver it to space. It depends on the individual rocket and mission.

The earliest multi-stage rocket designs used serial staging — Wernher von Braun and his team in Germany during the Second World War considered adding an upper stage to the A-4 to create the larger A-9 and A-10 that would be able to cover a much larger distance. A more familiar example of serial staging is my favourite rocket, the Saturn V. It had three stages — the S-IC (first), the S-II (second), and the S-IVB (third) — that were separated by explosive bolts. With each stage that fell away, retrorockets on the spent stage and ullage motors on the next stage helped put distance between the structures so staging would be clean and safe.

The Titan II that launched the Gemini mission did things a little differently. Also a serial staging rocket, it used hot staging. A closer look at the rocket reveals holes in the body! That’s because the second stage fired before the first stage fell away. The holes were for the exhaust of the second stage burning.

There’s another way rockets can stage. The space shuttle, we know, had boosters on the side of its main tank and not stages that sat one on top of the other. The shuttle used a kind of staging called parallel staging.

Parallel staging has small booster stages strapped to a central sustainer. All the engines ignite at launch and the strapped-on boosters fall away when their propellant is spent. The sustainer keeps burning to put the payload into orbit. With the shuttle, solid rocket boosters are the stages that fall away from the main sustainer, the external tank that fed the main engines.

Some rockets use a mix of these two kinds of staging, like the Titan III. This rocket used a two-stage Titan II as the sustainer and added two solid rocket stages as boosters that fell away once they were done, much like the SRBs on the shuttle.

Then there’s another kind of staging that’s weird and pretty uncommon called stage-and-a-half, but we’ve all seen it in action. The Atlas D that launched John Glenn in 1962 as well as the other three Mercury astronaut who followed in his orbiting footprints used this kind of staging.

Stage-and-a-half has a main core that acts like a sustainer stage and a booster stage that falls away during the flight. In the case of the Atlas D, the booster isn’t on either side of the sustainer, it’s sort of like a skirt that sits around the sustainer engine.

This odd setup was born of mid-century necessity. Engineers had already launched multistage rockets, but there were issues with the upper stages not firing on time and an unfortunate propensity for those rockets to blow up — it was the early 1960s and everyone in the space game was still figuring it out. To make sure the engines all ignited properly, it made sense to Atlas designers to have all engines ignite while the rocket was still on the launch pad. Dropping the booster that was also sort of part of the main stage was how it dropped dead weight in flight, making the rocket light enough to put a Mercury capsule into orbit.

Of course, all these methods require the stages fire on time and detach cleanly, and with so many moving parts it opens the door for compilations. The unicorn of rockets is the single stage to orbit, a simpler technology to do the same job of putting payloads into space. One company taking on this challenge is the ARCA Space Corporation whose Haas 2CA rocket might make the first SSTO flight as early as the end of 2018. Until this becomes reliable, we’ll keep having various staging manoeuvers as our paylods leave the Earth.