The Home Planet Seen from 100 Million Miles Away 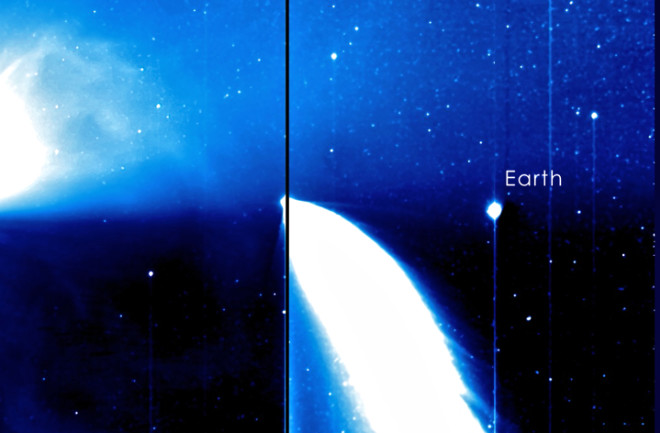 The STEREO-B spacecraft captured this view of Earth and the Comet PanSTARRS on March 13. Also visible is the sun, to the left, which is developing an ejection of material from its outer atmosphere, or corona. (Image: NASA/GSFC/STEREO) It's not every day that you get to see what home looks like from 100 million miles away — at the very same time that the sun is throwing material out into space and a comet is cruising by in the inner solar system. But that's exactly what the STEREO-B spacecraft observed on March 13. And it sent this picture postcard back to Earth so that we could enjoy the view. (The vertical line is an artifact of the imaging process.) This was the image of the day at NASA's fabulous Earth Observatory. But as I did on Friday with another EO image, I've taken some subtle liberties here to enhance what you see. To bring out some definition in the material that the sun, at left, is ejecting from its outer atmosphere, or corona, I've added a little local contrast and also a smidgeon of sharpening. In addition, I toned down the luminance of the blues, to accomplish the same goal. Look carefully at the sun and you can see material streaming off into space toward, well, us. Meanwhile, Comet PanSTARRS is between the spacecraft and Earth. The bright white dots are stars. STEREO-B also sent home a video of the comet:

A screenshot of a movie produced by the STEREO-B spacecraft between March 9 and 12. Click to watch the movie, which shows the comet and its fluttering tail as it moves through space. (Source: NASA) Make sure to click on the screenshot to see the movie itself. It's pretty cool. The sun is off the screen to the left, and in the movie you can see Mercury moving in its orbit. Speaking of Mercury, I've been looking for an excuse to share this image — have you seen it yet?:

Meteorite NWA 7325 is believed to have come to Earth from Mercury. (Image: Stefan Ralew / sr-meteorites.de. http://www.sr-meteorites.de/NWA7325/nwa7325-1.JPG) This beauty, dubbed Meteorite NWA 7325, was found in Western Sahara in 2012 — and scientists believe that it may well have come from Mercury. If so, it would be a first: No other meteorite from Mercury has ever been found. For the nitty gritty scientific details, check out this paper by Anthony Irving of the University of Washington, which he gave at the recent Lunar and Planetary Science Conference. For a slightly less technical discussion, go here.