The Hand and Eye Behind "The Theory of Everything" 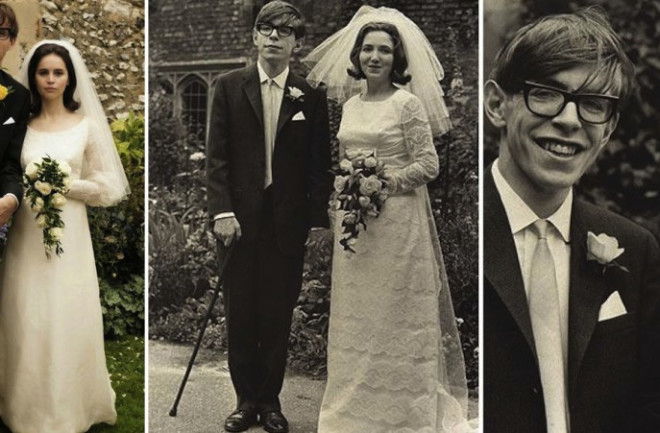 Stephen and Jane Hawking on their wedding day, in film (left) and real life (middle and right). [Credit: Jane Hawking; Liam Daniel/Focus Features]The Theory of Everything--the long-awaited biopic about physicist Stephen Hawking, opening this Friday--is admirable for the things that it does not do. There are no scenes in which glowing equations hover around Hawking's head. There are no swirling camera angles intended to convey a genius's convulsive thought process. There are no floating grids attempting to depict space and time, and not a single CGI black hole to be seen. Simply by negating those cliches, the movie is a revelation. But praising The Theory of Everything for its omissions does it a disservice. The film achieves far more than sidestepping the common pitfalls of beautiful-mind storytelling; it takes a full-on, no-safety-net dramatic plunge. It presents Stephen Hawking (Eddie Redmayne, every bit as good as you've heard) as a cocky, witty, prickly, passionate, arrogant, lovable, and--yes--prodigiously intelligent character. It retraces his romance with Jane Wilde (Felicity Jones, equally impressive in a quieter and more controlled role) in exquisite and sometimes painful detail. Most remarkably, the movie worms its way into the philosophical heart of science, exploring unflinchingly what it means to think like a open-minded physicist.

Hawking (holding a handkerchief) with the Oxford Boat Club, early 1960s. This is where scientific biographies so often fall short. Many movies have depicted the curiosity that drives the science but lacked the courage to probe the complex motivations that underlie it. In The Theory of Everything, Stephen Hawking is a gleeful atheist who is relentless in rebutting his wife's heartfelt Anglicanism. At the same time, he is absolutely devout in his conviction that scientific inquiry is the correct path toward truth. Following that path means that he must be free to question everything--even the ideas about the origin of the universe that he developed for his PhD thesis. Watching Hawking go about overturning his own cosmology with even more joy than he experienced in developing it in the first place is an experience unlike any I can recall seeing on the screen. (Some writers gripe that the specific details have been fudged, but that misses the point.) Those scenes distill what is so powerful and so terrifying about science: The possibility that every idea is in error, that every theory is provisional, that every question can lead to an advance but also to yet another question. I caught up with director James Marsh to find out what it was like putting together this unique portrait. How did you settle on a way to depict the inner life of a man who is famously closed off, both because of his intellect and his physical condition? James Marsh: The way into the story was a portrait of a relationship. That relationship offers you perspective on Stephen's career and ideas, but it's anchored by a dramatic and emotional story that you can feel confident about telling. Film is really not the right arena or forum for theoretical physics, so what I tried to do—like Isaac Newton and the apple or Archimedes in his bath—is create imagery that could approximate, in a simple way, some of the ideas Stephen is wrestling with mathematically. So you decided from the start there would be no floating equations or "genius" graphics? JM: You can write equations on the blackboard--and we do that one time in the film when Stephen is possessed with an idea--but that’s really about the flow of the ideas, not mathematics that we expect you to understand. It’s quite a hard thing to do. My idea was to keep it quite basic. When Jane describes Stephen’s change of mind in a meal scene where she’s using peas and potatoes, that felt like a playful way of trying to explain something quite complicated, to root it in character as much as we could. My idea was not to get too trick-sy with it, to keep it at a fairly simple visual level.

Young Hawking at the blackboard--the closest the film comes to literal depictions of his theory. [Credit: Liam Daniel/Focus Features]

The Theory of Everything treats Cambridge University almost as a character in itself. How did you capture the feel of British science in the 1960s?

JM: I’m a documentary filmmaker by background. The May Ball you see put on in the film was based on some film I’d seen of the May Ball in Cambridge in the ‘60s. We looked at photographs trying to get the feel of it through the design of the film, and even through the language. Jane and Stephen speak a different version of English than I do, because they’re a different generation. Anthony [McCarten, who wrote the screenplay] caught that in his writing; he got that from Jane Hawking’s memoir [on which the screenplay is based], this slightly different way of speaking. All those little details help create a portrait of a world that doesn’t exist anymore. What about the central challenge of getting into the mind of Stephen Hawking? How did you approach that? Did he help you out personally? JM: We didn't have a lot of contact before we made the film. We took the script to him and he gave his tacit approval to go ahead with a story about his intimate life--about his first marriage, which ended in failure. Then we took his team to the set when we were filming in Cambridge, and I think he enjoyed the spectacle we put on of the May Ball. When the film was almost finished we showed him more of it, and I do believe he was genuinely surprised--and he said as much--that it wasn’t terrible. I think he was quite moved by it. Stephen, after seeing the film, said it felt to him to be broadly true. He also said that when he saw Eddie Redmayne's performance at certain points he felt like he was watching himself, which is a great compliment to Eddie. Then he offered his actual voice. Up to that point in the production we were using a voice we’d created, a facsimile, but it wasn’t quite The Voice. He gave us that voice. That voice is what you hear in the film, and it changed things in a mysterious way. At the very end of our production we had this element that felt like it made it more interesting and more true.

Cambridge's May Ball, recreated for the film, with a lesson about fluorescence thrown in. [Credit: Liam Daniel/Focus Features]One of the most striking things about Stephen Hawking is how freely he embraces his contradictions--his willingness to change his mind. JM: That’s because you’re basing things on evidence. The facts need to influence your conclusions, and in the realm of theoretical physics those facts are still being groped for. That’s an interesting part of science, that you have to be open to changing your mind. Many a great scientist does. It’s a hallmark of that thinking, that you’re open to the evidence changing your ideas. Which is true of a filmmaker, too. If things aren’t working you have to change how you’re doing it. If the results you’re getting don’t equate with what you want, you have to change your mind about how you’re doing something. There’s an analogy there I’m stumbling on just as we speak.

Previously you made a documentary called Project NIM, about chimp language. Are you particularly drawn to scientific themes?

JM: Project NIM was very different, it's more about psychology, but I’ve found it out twice now: The drama can deal with huge aspects of human life and human emotion. Film is not often the best place to understand scientific ideas, but those ideas certainly can impact how people behave and how they relate to each other. In The Theory of Everything, Stephen is an atheist who believes science will answer the ineffable questions that we pose about the universe, and Jane believes God created a construct of the universe. My interest ultimately is in the human drama, and how the science and the quest for answers impacts people’s relationships with each other. That may be the common theme in those two films.

Stephen Hawking has a strong worldview. Did working on The Theory of Everything change the way you look at the world?

JM: One of the privileges of doing what I do as a filmmaker is that in each film you make, you have to reckon with the implications of the ideas you’re dealing with. I remember several weird lonely nights in hotel rooms just looking out at the sky and feeling diminished as a person—we’ll never understand what this is we’re in, I have this brief window of consciousness on the world and that’s all I’ve got, and that’s all anyone can have. This film was particularly interesting in that I had that almost cosmic sense of insignificance and the existential terror that goes with it. I had those moments of feeling totally and utterly insignificant in the scheme of things. But that happens to me on the New York subway sometimes as well. These days, Hawking talks a lot about the dangers that threaten our survival of our species. Did you absorb some of that as well while working on the film? JM: What he’s talking about is the fragility of our ecosystem, and what appears to be, as far as we can tell, our unique set of circumstances to have life on a planet in the first place. It feels like we have this amazing experiment going on with evolution and life, and how dare we destroy it? How dare we threaten it with our selfish concerns as a species? That's the gist of his thought, and I go along with it.

For more on the film, and on broader physics and astronomy news, follow me on Twitter: @coreyspowell