Archaeologists analyze ruins in the heart of Mexico City 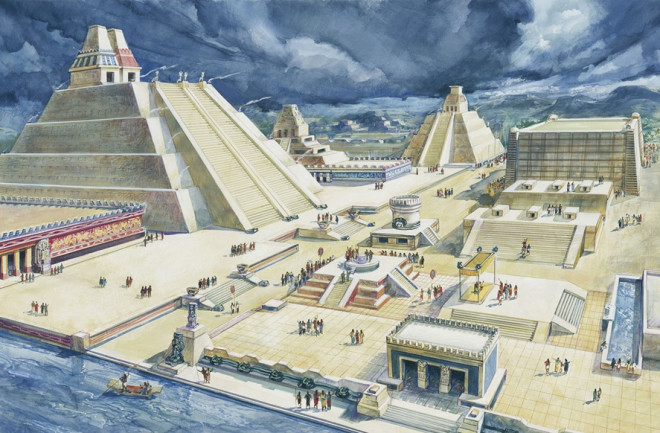 Temple 7.0 The temple began as a modest structure in the 1300s, but as the Mexica, the ethnic group that came to rule the Aztec Empire, amassed wealth and territory, they enlarged the monument. By the time Spaniards arrived in 1519, Templo Mayor had undergone six major renovations, becoming a 10-story pyramid, with earlier structures nestled inside. This latest and greatest phase is the most poorly preserved: Only fragments of the floor remain because the Spanish razed the temple for materials to build their colonial city. DEA PICTURE LIBRARY/De Agostini/Getty Images

In 1978, utilities workers digging in Mexico City unearthed a colossal stone relief, depicting an unmistakable figure: the Aztec goddess Coyolxauhqui, naked, dismembered and decapitated, after being slain by her brother, Huitzilopochtli, the god of sun and war. Archaeologists realized the carving must be part of Templo Mayor, the Great Temple of the Aztec Empire, known to lie somewhere below the city center based on colonial-era accounts and previous limited digging projects.

The setting had deterred earlier archaeological investigation because the Aztec ruins were buried under functioning buildings, some erected in Spanish colonial times, themselves protected as historic landmarks. However, the Coyolxauhqui relief sparked such national excitement that archaeologists were permitted to embark on long-term excavations, first led by Eduardo Matos Moctezuma of Mexico’s National Institute of Anthropology and History.

The government initially allowed the team to demolish 13 buildings of limited historical value. Since then, excavations have continued in fits and starts, in collaboration with construction and maintenance projects. Today, remains of the main temple are exposed for visitors, right in the city center — a UNESCO World Heritage Site.

“It’s a beautiful, lively Mexican scene where you’ve got modern Mexico City, colonial Mexico City and also pre-Columbian Mexico,” says Davíd Carrasco, a scholar of Mesoamerican religions at Harvard University. The site is so rich that research could “go on for another 100 years,” says Carrasco, who studies the temple. Some recent spectacular finds follow.

Gifts to the Gods According to Aztec beliefs, gods suffered to create life and had to be repaid. Aztec priests hid divine offerings under floors, in caches systematically positioned along horizontal and vertical axes that placed Templo Mayor as the center of the universe. The gifts included luxury goods from across the empire, artifacts from earlier civilizations and the remains of thousands of humans and animals — many sacrificed atop the pyramid during lavish ceremonies. Jésus Lopéz
Skull Tower Between 2015 and 2017, archaeologists excavated a tower, nearly 20 feet in diameter, made from more than 650 human skulls. The sacrificial victims — men, women and children — have gaping holes above their ears, suggesting the severed heads were strung on a rack for public display before being permanently encased in the tower. Colonial-era manuscripts depict a skull rack at Templo Mayor, but this is the first bone-a fide evidence. Henry Romero/Reuters

Built by: The Mexica, the ethnic group that ruled the Aztec Empire — itself a coalition of peoples across Central America from the mid-1300s until the Spanish conquest began in 1519.

Excavations led by: Mexico’s National Institute of Anthropology and History.

Eye Candy Some skulls were crafted into masks with eyeballs of shell and pyrite. According to a 2016 Current Anthropology study, the masks likely came from wealthy, captured warriors because they were mostly young and middle-aged men with healthy teeth, buried with precious items. Roger Cracknell/Classic/Alamy Stock Photo
1 free article left
Want More? Get unlimited access for as low as $1.99/month
Subscribe