The Grandest Rocket Ever

After scientists made the bomb, they had to redeem themselves 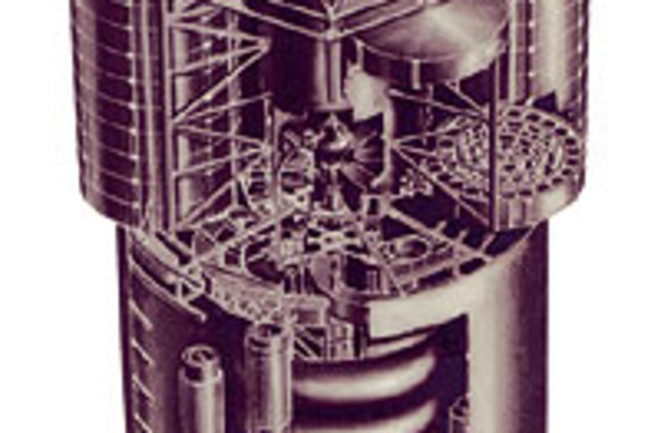 The spaceships of Project Orion, designed in the late 1950s but never built, had in common their massive size (this one was more than 30 feet in diameter) and a propulsion system that relied on controlled nuclear explosions.

Space travel, in this new millennium, seems all about thinking small. Spirit and Opportunity, the two rovers still wandering the surface of Mars, weigh only 400 pounds each. Cassini, the spacecraft surveying Saturn and its moons, weighs little more than 2.5 tons sans fuel. But there was a time when space travel kindled grandiose visions in scientists’ minds, when rockets were as tall as skyscrapers and an unmanned mission seemed a failure of nerve. The most magnificent of these visions, and perhaps NASA’s greatest missed opportunity, was Project Orion: an 8-million-pound spaceship propelled by nuclear explosions, designed to take a full crew to Saturn and beyond.

Orion was the brainchild of Stanislaw Ulam, a Polish mathematician-turned-physicist who worked on the Manhattan Project and later helped create the hydrogen bomb. Working at Los Alamos was the headiest experience of Ulam’s life, but after the war he began to wonder, “What’s next?” His answer was Orion. Soon after the first atomic explosion in 1945, while others were thinking about using missiles to deliver bombs, Ulam began thinking about using bombs to deliver missiles. NASA’s space program did not yet exist, and nuclear energy seemed the most direct path to interplanetary transport. So Ulam wrote a memorandum on the subject in 1947 that is still classified. Ten years later, under a cloak of secrecy, Orion was born.

The project was launched by General Atomic in La Jolla, California, in the frenzy after Sputnik. It had a staff of 50 at its peak and a budget of more than $2 million (the equivalent of $1.28 billion today). Its scientists and engineers came from more than 14 countries and were led by Los Alamos bomb designer Theodore Taylor. “I always dreamed a lot about a Star Trek–like crew,” Taylor remembered, when I spoke to him in 1998. My father, Freeman Dyson, was one of the first physicists to sign on. “Our motto was ‘Saturn by 1970,’ ” my father told me.

Orion’s engineers envisioned a vessel comparable to Darwin’s Beagle: a massive ship on which a group of 50 to 150 adventurers could live and work for years at a time. Air Force officers would work the bridge, while civilian scientists sampled the rings of Saturn as the ship made its grand tour of the solar system. The ship would be 20 stories tall and would work like a giant one-cylinder engine, with a single piston reciprocating within the combustion chamber of empty space. Propulsion would come from nuclear detonations at half-second intervals, the yield increasing as the atmosphere decreased. The first 200 explosions, providing a combined yield equivalent to 100,000 tons of TNT, would lift the ship from sea level to 125,000 feet. Each additional kick would add about 20 miles per hour to the ship’s velocity. After 600 more explosions, the ship would be lofted into a 300-mile orbit around Earth.

Taylor hoped to be aboard for the initial flight—to Mars—but also would have been thrilled just to witness Orion take off. “I used to have a lot of dreams about watching the vertical flight,” he said. “The first flight of that thing doing its full mission would be the most spectacular thing that humans had ever seen.”

When Taylor sat down to design the ship, he faced a fundamental problem. A nuclear explosion produces lots of energy but little momentum. How do you translate one into the other? There is no air to form a blast wave in space. You have to put some cold, inert material around the bomb to absorb energy, translate the energy into momentum, and propel the vehicle. “I was up all night,” Taylor recalled. “Energy divided by volume gives pressure, so the pressures were out of sight, unless it was very big.” His colleague Charles Loomis, another Los Alamos alumnus, told him to go ahead and think big. “It was Chuck’s call that if you were serious about exploring the solar system, why not use something the size of the Queen Mary ? He understood that bombs could in principle do it. They could lift downtown Chicago into orbit.”

But could you harness a nuclear explosion without blowing up the ship? The answer appeared to be yes—if the impulses were spread out and the ship was adequately cushioned. Orion’s main compartment, where the astronauts worked, would be separated from the blasts by shock-absorbing legs and a 1,000-ton pusher plate. The bomb debris would hit the pusher at roughly a hundred times the speed of a conventional rocket’s exhaust, producing temperatures no rocket nozzle could withstand. For about one three-thousandth of a second, plasma from the explosion would stagnate against the pusher at a temperature of about 120,000 degrees Fahrenheit—hotter than the surface of the sun but cooler than an atomic bomb. The contact would be too brief for the heat to penetrate the pusher, so the ship could survive an extended series of pulses, the way a person can run barefoot across a bed of coals. Even on an interplanetary mission involving several thousand explosions, the total plasma-pusher interaction time would last less than a second.

Orion spaceships were designed to fly as far as Saturn and its moons. These two ships would have carried passengers to Mars in a convoy, complete with small space taxis for shuttling crew and supplies between them. | Courtesy of George Dyson and Thomas Macken

The Orion team worked for seven years on a series of increasingly detailed designs. The largest version, called an advanced interplanetary ship, was 185 feet in diameter, 280 feet high, and weighed 10,000 tons. Propelled by 800 15-kiloton bombs, it was powerful enough to carry a payload of 6,100 tons into orbit, 5,700 tons to the moon, and 1,300 tons on a three-year trip to an inner satellite of Saturn and back. “No technical reason has been found that would render the concept not practicable,” the engineers wrote in their final report. “On the contrary, all indications today point to the straightforward achievement of operational objectives with this form of propulsion in times and for monies that appear very reasonable in context with present-day National policies and objectives.” Yet neither this design nor any other like it received a green light.

Project Orion was doomed, to a large degree, by its own secrecy. It was never discussed publicly and thus never had a chance to gain popular support. To sell the project to the Air Force, the Orion team dreamed up missions such as Deep Space Force: a fleet of 4,000-ton vehicles, bristling with 25-megaton retaliatory warheads, that would keep the Soviet Union in check, orbiting between Earth and the moon. “Whoever controls Orion will control the world!” claimed General Thomas Power, commander in chief of the Strategic Air Command—ensuring that the plan would be scuttled.

Scientists like Taylor, and the policymakers who negotiated the atmospheric test ban treaty, knew that Project Orion would open a Pandora’s box. It was impossible to separate its development from the development of bombs. To propel their ships, the Orioneers came up with a kiloton pulse unit as small as 13 inches in diameter, which focused the propellant into a jet as narrow as 15 degrees. But the same devices could be used for antisatellite warfare in space or tactical warfare on the ground.

To sell the project to NASA, the Orion team came up with a scaled-down version that weighed only 100 tons and could be boosted into low Earth orbit by a Saturn V rocket. The agency, however, was preoccupied with reaching the moon and couldn’t accept the political risk of a project driven by bombs. In the late 1950s, the United States and the Soviet Union were testing 100 megatons’ worth of nuclear weapons in the atmosphere each year. A full-fledged Orion mission would have increased the amount of fallout from those tests by 1 percent. The project’s physicists—who welcomed a nonmilitary reason to enhance their craft—thought they could design cleaner bombs. They eventually reduced the fallout by a factor of 10, but never by a factor of 100, as they had hoped. Orion never had a realistic chance of lifting off.

Today the project seems to belong to a bygone era. Scientists can no longer fly coach with a pair of nail scissors, much less imagine flying to Saturn in a first-class space cabin, carrying thousands of nuclear bombs. Dreams of spacecraft as large and lavish as the Queen Mary have given way to more practical visions—bunker-buster bombs, for instance, that use the Orioneers’ low-yield, directed-energy devices to destroy targets underground.

Some Orion enthusiasts hope to bring the project back to life. But the window of opportunity that opened between the launch of Sputnik in October 1957 and the establishment of NASA in July 1958 has permanently closed. Could a new window open up? Perhaps. If and when nuclear explosives are less threatening to us on the ground, there might be reasons to establish an Orion-based Deep Space Force—a small fleet of unmanned vehicles, stationed in high orbit under international control, on standby to deflect meteors or other objects that threaten Earth.

In any case, Orion ought to teach us to dream big, even if our spacecraft are small. “What would have happened to us if the government had given full support to us in 1959, as it did to a similar bunch of amateurs in Los Alamos in 1943?” my father wondered, when the project was at an end. “Would we have achieved by now a cheap and rapid transportation system extending all over the solar system? Or are we lucky to have our dreams intact?”