The Giant Crusher That Can Destroy NASA Rockets 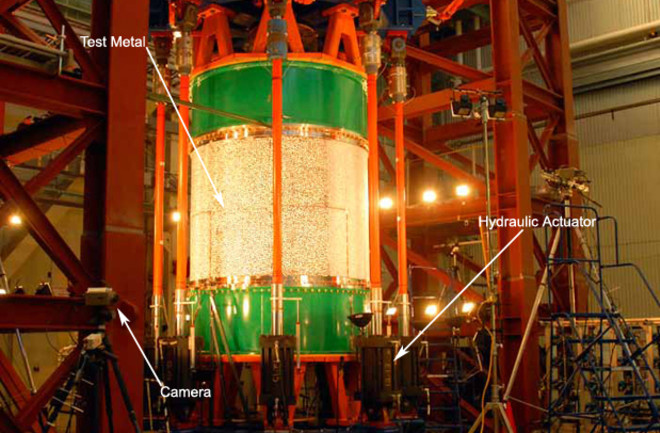 On March 23 scientists at NASA’s Marshall Space Flight Center spent the day destroying perfectly good metal in the name of rocket science. The engineers watched as a giant machine crushed a 20-foot-tall hollow metal can with nearly a million pounds of force over the course of about five hours. The point? To simulate the extreme forces that can bend and compress the surface of a rocket as it plows through the atmosphere into space.

The “can crusher” is one of NASA’s premier instruments for developing new rockets capable of carrying payloads more affordably to the International Space Station and beyond. (Today, launching cargo into space costs about $10,000 per pound.) “Our rocket engineering guidelines date back to the Apollo program in the 1960s,” says Mark Hilburger of the NASA Langley Research Center in Virginia. “We can do a lot better.”

The squashed container was no soup can. It was made of 3,000 pounds of aluminum and lithium, the same alloy that has clad space-shuttle rockets since the 1980s­. The crushing began with force applied by eight hydraulic actuators, each capable of exerting a quarter-million pounds of force to the can. About 800 sensors on the metal registered the deformations. High-resolution cameras, meanwhile, snapped photos of the test metal’s exterior, which was speckled with 70,000 black dots whose movements were tracked by imaging software to reveal the buckling in finer detail. Ultimately, the shell withstood 750,000 pounds—250 times its own weight—before it began to collapse.

Later this summer Hilburger and team will feed the crusher a can made of carbon-fiber material that is 25 percent lighter than the metal alloy. Of course, a few practice runs will be necessary in the meantime. “I just crushed my Diet Coke can,” Hilburger says. “You can’t help but want to crush things all the time.”