The Geologic Nature of Our Borders 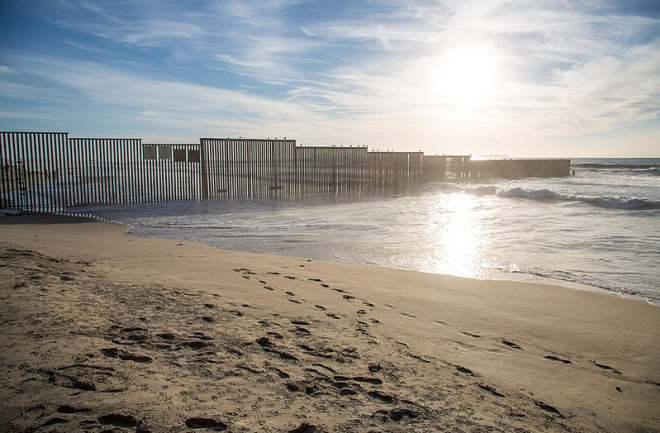 The U.S.-Mexico border near San Diego, California. Wikimedia Commons. The world's current political climate is one where we are very aware of borders. They divide what we humans decide is one country, one state, one region from another. They can be very clearly defined where everyone would notice the boundary and in other cases, they are merely defined by imaginary lines we've projected on our planet. Much of the time, these boundaries are geologic -- that is, they use features created by geologic processes to demarcate one nation from another. However, when you look at the geology of the planet, it doesn't care about nations and these geologic barriers are never forever over geologic timescales. What got me thinking about geologic boundaries was looking at an area with low stakes: the state line between Arkansas and Mississippi. It is the mighty Mississippi River that is supposedly the boundary between these two states. However, that boundary was set over 150 years ago and rivers meander. That means that the channel of the Mississippi river has moved as the processes of deposition and erosion carve out a new path. This leaves the boundary and the river following different paths:

The Arkansas (left)-Mississippi (right) state line, with the Mississippi River in the middle. The muddy Mississippi no longer follows the same path that defined the state line. You can see where the river was in the landscape, but the twists and turns that existed when the line was marked have now been cut off by the river, so land in Arkansas that was once on the west of the river is now on the east. This will keep on happening and as long as the states don't mind that there border is not neat and tidy, then the river and the boundary can continue to diverge. If we head south, the southern border of the United States and Mexico -- a decidedly much more contentious boundary -- is also marked by a river for much of its extent in Texas. That river is the Rio Grande and as it heads to the coast, the river behaves much like the Mississippi:

The border between the United States (top) and Mexico (bottom), with the Rio Grande marking the boundary. Now, at least right now, the border between the two countries follows the river, but the same evidence of a meandering river can be seen here. In the lower right you can see the remnants of a big, looping meander that dips much further south than the current river. The same can be said for two remnant meanders see to the north of the river on the U.S. side. The path of the Rio Grande will change and if it defines the border, then what is considered the U.S. and Mexico will change with it -- it is not permanent. Other parts of the world use different boundary markers. Where I worked in northern Chile, the boundary between Chile and Bolivia was pegged to the top of volcanoes, like string between stretched between thumbtacks. It used to be that the northern deserts were part of Bolivia all the way to the Pacific, but Bolivia lost that access to the ocean (and the copper that was found to be in those lands) in the War of the Pacific. To this day, parts of the border still have landmines to control migration across this inhospitable land where the myriad of volcanoes on both sides are used to say whose side is whose.

The border of Chile (left) and Bolivia (right), with volcanoes marking the boundary. In some places, the geology that defines boundaries is very clear and real. Across Asia and India, the Himalayas are such a topographic barriers that many countries are broken from one another by those impressive range of mountains.

The Himalayas are used as a boundary across much of Asia. You can also look at a "boundary" like what surrounds New Zealand. The island nation is separated by over 2,000 kilometers from Australia -- roughly the equivalent of the distance from New York City to Lincoln, Nebraska. Yet, it didn't stop birds to populate the island and, eventually, humans (and their accompanying mammals) to reach there by ~1300 A.D. That is one of the most remarkable aspects of humans. As a species, we don't care about most physical boundaries. If we want to get somewhere, it will happen, whether it be crossing that massive mountain range to ending up traversing the oceans to remote islands. Yet, as a species, we want to define these boundaries as stark lines shouldn't be crossed.

New Zealand is thousands of kilometers from the nearest other continent. This gets even more complicated when the boundaries aren't geologic or physical features. The borders between the U.S., Canada and Mexico are partially set by lines of latitude, a completely abstract construct. The geology of North America crosses these boundaries without a care, as the North American Cordillera (Rockies and Sierra Madre) stretch from Canada to Mexico. We've decided they are different areas, but geologically-speaking, there are all part of the same province that has experienced similar geologic histories and processes over time periods much longer than our political entities.

The mountain terrane of western North America cross the borders of Canada, the U.S. and Mexico with reckless abandon. In fact, over the history of our planet, all our boundaries will vanish, real or imagined. The plates will move, bringing places that were once separated together or split countries apart in ways they never imagined. Rivers will continue to change course or vanish entirely if new mountain ranges spring up. Those old mountain ranges will wear away from the wind and water that erode the Earth's surface, washing the geologic wall out to sea (or at least downstream). How we divide the world is temporary, both for our species and geologically.